Argos roll past Ticats to clinch 1st place in East 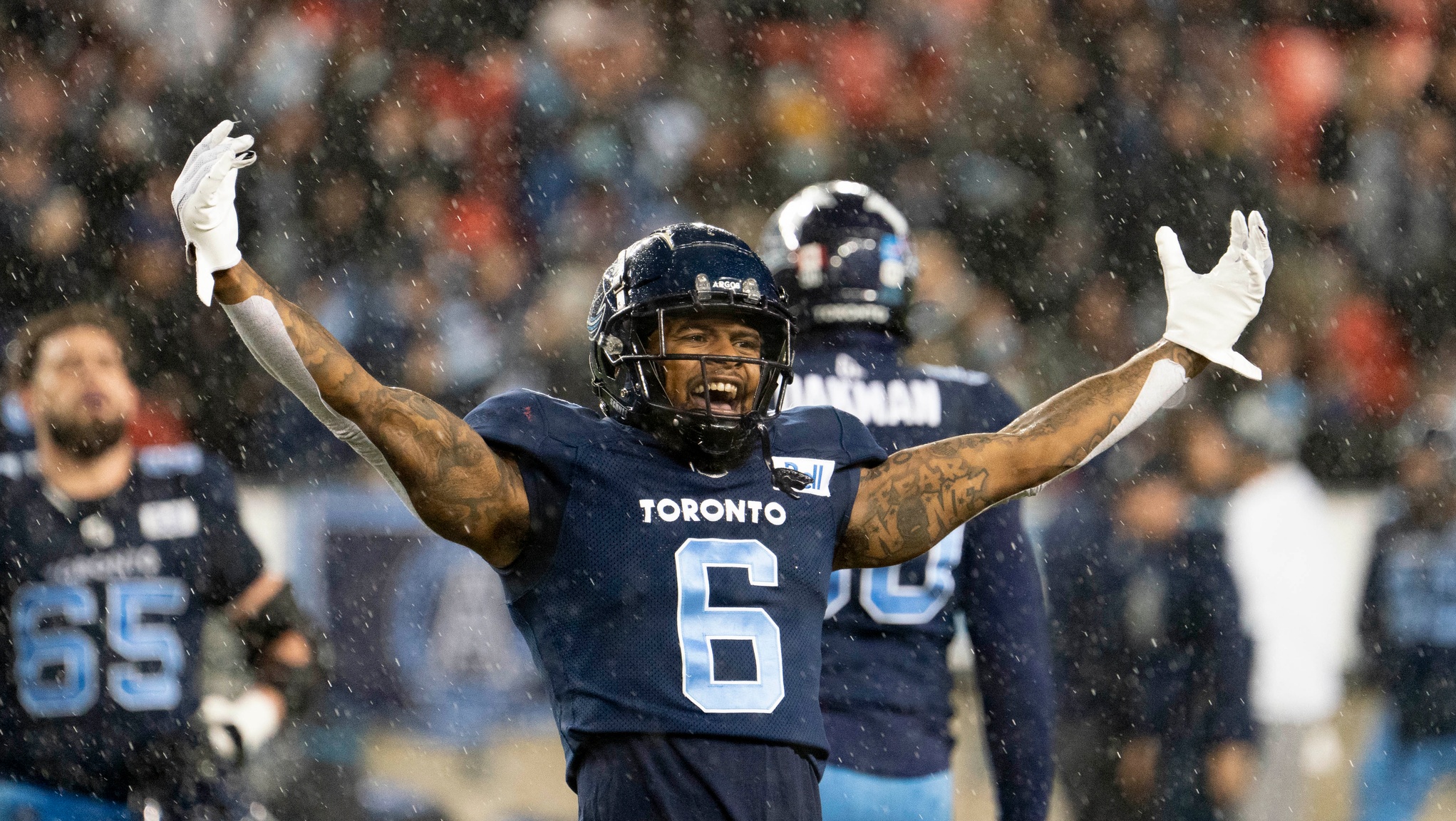 Argos roll past Ticats to clinch 1st place in East

TORONTO — The Toronto Argonauts locked up top spot in the East Division with a 31-12 win over the rival Hamilton Tiger-Cats on Friday night at BMO Field.

The surging Argos now hold a 9-4 record after claiming a third straight win, and they remain undefeated at home this season (6-0). Toronto will host the Eastern Final on Dec. 5.

A 78-yard pick-six by Chris Edwards sealed the victory in the final seconds as Toronto clinched the East for the first time since its Grey Cup championship season in 2017.

Argos quarterback McLeod Bethel-Thompson finished with 250 passing yards, including a touchdown toss to Kurleigh Gittens Jr. in the fourth quarter.

Kicker Boris Bede continued his strong season for Toronto by making all three of his field goal attempts. The veteran hasn’t missed since Week 12.

Both defences started strong to keep the game scoreless in the first quarter, with both teams combining for five punts.

Toronto was dealt a temporary blow on offence when left tackle Dejon Allen exited the game momentarily with an injury late in the opening quarter. Bethel-Thompson was picked off on the very next play, as Kameron Kelly brought pressure off the right side to force a throw that was intercepted by Cariel Brooks for his fifth pick of the season.

Allen returned to the game early in the second quarter, and the Argos’ offence proceeded to put together a solid drive that resulted in the first score of the game — a 26-yard field goal by Bede. Bethel-Thompson moved the chains three times through the air to help set up the kick.

Masoli improvised and broke free for a 13-yard run on the following drive, moving the Ticats into Toronto territory for the first time. But the promising drive fell short, as the Argos’ defence stood tall to force a 48-yard field goal attempt by Taylor Bertolet that ended up going wide.

Chandler Worthy gave Toronto a spark on special teams late in the half with a 37-yard punt return. Bethel-Thompson connected with Ricky Collins Jr. one play later to set up first-and-goal at Hamilton’s six-yard line.

A five-yard catch by Dres Anderson moved the ball down to the goal line, and Pipkin capped the drive off with a one-yard touchdown run.

Hamilton’s leading tackler Jovan Santos-Knox was ejected from the game following the play for unnecessary roughness, and Bede kicked the extra point to give Toronto a 10-0 lead.

Toronto added another point on the ensuing kickoff after it was downed in Hamilton’s end zone for the single. Bethel-Thompson engineered a drive in the final minute of the second quarter to set up a 39-yard field goal by Bede — giving Toronto a 14-0 lead entering halftime.

Bede added an 11-yard field goal in the third quarter after Hamilton came up with a big stop in the red zone to keep the score within reach.

Masoli responded on the following drive by completing three straight passes, but a sack by Canadian rookie Sam Acheampong forced Hamilton to settle for a 27-yard field goal by Bertolet.

Toronto’s defence answered back by intercepting Masoli on Hamilton’s next possession. Jalen Collins came down with the easy pick after Masoli launched a pass off his back foot while under pressure.

A 22-yard run by Pipkin gave Toronto even more momentum, and Gittens capitalized by making a defender miss for a 12-yard touchdown.

Bede kicked the extra point to put Toronto up 24-3 with ten minutes left to play in the fourth, and the Argos added another point after Bertolet’s 35-yard field goal attempt went wide and out of bounds.

But Hamilton’s onside kick attempt was recovered by Edwards for Toronto. Edwards made another big play to put the game away by picking off Masoli and returning it for a 78-yard touchdown in the final seconds.

The final week of the regular season will see Toronto host the Edmonton Elks on a short turnaround this Tuesday at 7:30 p.m. ET, while Hamilton will host the Saskatchewan Roughriders next Saturday at 4 p.m. ET.