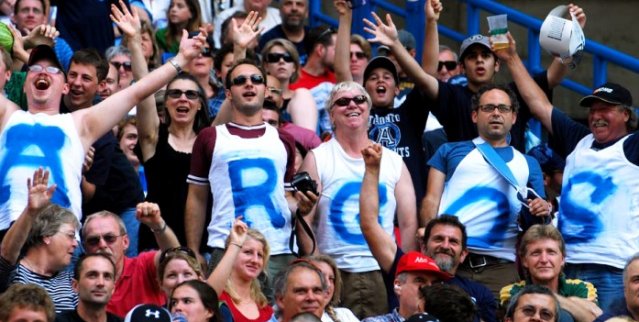 Two days after Coldplay entertained and fired up 40,000 rabid fans at the Rogers Centre, the Toronto Argonauts were hoping to do more of the same against the Winnipeg Blue Bombers.

Before we get to a little game analysis, let’s paint a picture of the in-game fan experience.  As a staunch CFL supporter there are many reasons why I really enjoy Canadian football.

Firstly, where else can you go with friends and family where kids can get in for free while everyone enjoys an alcohol-free “Family Day”?  For me, and many others, a football game is not an excuse to drink a few wobbly pops and act silly.  It is, however, a time of great fun and frivolity.

My favourite part of the many activities happening during the game is when the famous Argonotes play.  The Argonotes, led by a huge guy wearing an Argonote football jersey with the name “Dictator” on the back, are an eclectic group of musicians who play at every Argos home game.  Situated in the south-east end of the 100 level, the group is famous for playing big band tunes and getting the crowd excited and engaged throughout the game.

An Argos game is never complete without the lovely Argonaut cheerleaders!  They regularly take to the field and dance to the latest pop tunes.  These “ladies of the field” also take to the stands throughout the game handing out prizes and giveaways.  The fan favourite “Kiss Cam” and Caribbean prize giveaway are other “non game” activities that the crowd seems the thoroughly enjoy!

Finally, there is the always popular “See You On The Field”.  For 30 minutes after the game, fans and family are able to spend time on the playing field.  For many kids, young and old, being able to mingle and take pictures with their favourite Argo is a dream come true.  Who knows, one day one of these kids may grow up and dress in the famous “double blue”.

Maybe Coach Andrus can use one of these future Boatmen.  After coming off an away win against the Blue Bombers, the Argos were hoping to sweep the back end of the home and home series.

Early on the Argos defense gambled to make big plays.  This led to some costly mistakes and unnecessary penalties early on.  One big penalty led to the first Blue Bomber touchdown.  The Argos offence almost responded before the end of the first quarter, but was intercepted at the Winnipeg 5-yard line.

Finally, the Boatmen scored on a 102-yard drive that was capped by a 25-yard touchdown reception by rookie Chad Lucas.  However, throughout the game both the Argos and Bombers failed to capitalize on each other’s mistakes and blow open the game.

With less than a minute to play, and the 20,000+ fans screaming for a home victory, Justin Medlock lined up to kick a 57-yard field goal to seal an Argo victory.

He hit the crossbar.

It’s been a year since the Toronto Argonauts won a home game.

Karim Kanji is a Toronto Argonauts fan. He posts on Twitter as @karimkanji.