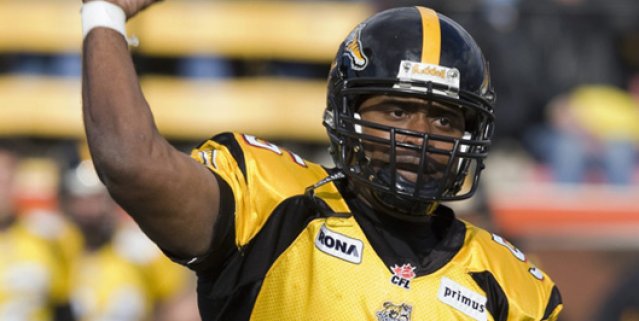 HAMILTON — DeAndra Cobb and the Hamilton Tiger-Cats defence blew past the Saskatchewan Roughriders on Saturday afternoon.

Hamilton effectively countered gusting winds with Cobb’s 159-yard rushing performance with a TD and six sacks by its defence to dispatch the Riders 24-6 before an Ivor Wynne Stadium gathering of 24,586 spectators.

Hamilton’s defence held Saskatchewan to just six points with the wind, which gusted between 59 and 81 kilometres an hour throughout the contest. The unit also forced four turnovers (two fumbles, one interception, once on downs) and its sack total was the most since registering five against Toronto in September 2005.

“The defence was dominant,” Ticats head coach Marcel Bellefeuille said. “I had a feeling they could play that type of football game.

“They’ve been poised for a big game like that. I thought the front seven did a great job and the secondary as well in coverage. We played good situational defence.”

Offensively, Hamilton scored 14 points with the wind but it was the unit’s ability to control the ball with a solid rushing attack and short passing game when marching into it that was most telling. The Ticats ran for 196 yards and amassed 433 total yards in snapping an 11-game losing streak against Saskatchewan.

Hamilton’s best offensive showing of the half came in the second when quarterback Kevin Glenn marched the unit 74 yards on 13 plays before Nick Setta capped it off with a 10-yard field goal for a 21-3 lead at 14:26. The Ticats kept the ball away from the Riders’ offence for 6:05.

In fact, Bellefeuille said the weather conditions forced him to change his special-team alignments to include more players capable of handling shorter kicks. It also made him re-jig the offensive gameplan and incorporate more running plays, putting the onus on Hamilton’s front wall to control the line of scrimmage.

“It (offensive line play) was critical, especially when you get these windy games,” he said. “You’re trying to eat up clock going against the wind.

“In the fourth quarter when we could’ve been more aggressive we had a lead so we were back in the same boat again where we had to eat clock up and keep them off the scoreboard.”

Hamilton (8-9) moved into second in the East Division with its second straight win. The Ticats can cement the No. 2 spot – and home field for the conference semifinal – with a win next weekend against Winnipeg. The Blue Bombers (7-9) can grab a share of second with a win Sunday over Montreal, but regardless of that outcome can still secure second with a home victory over Hamilton.

The Ticats haven’t played in a playoff game since ’04 and last hosted a post-season contest in 2001.

Saskatchewan (9-7-1) could’ve clinched a home playoff game for the third straight year with a win. But the Riders, who have at least five players battling the flu, remain tied atop the West Division standings with Calgary, although the Stampeders were scheduled to face the B.C. Lions later Saturday night.

“We weren’t able to generate anything with any consistency on offence and we left our defence on the field too long,” said Riders head coach Ken Miller. “We’re not going to make an excuse of any kind (due to flu bug).”

“We got our fannies beat by a team that was well prepared and executed well.”

Regardless of that outcome, the Riders and Stamps square off next weekend with the winner finishing first and securing home-field advantage for the conference final.

“We all knows what lies before us,” Miller said. “We all know what needs to be done so its incumbent on every one of us to do the very best we can to be successful in that game next week.”

Hamilton’s defence harrassed Riders starter Darian Durant, who was just 8-of-20 passing for 66 yards and an interception before giving way to Steven Jyles in the fourth.

Glenn finished 22-of-35 passing for 237 yards and a touchdown. Slotback Dave Stala was Glenn’s favourite target with nine catches for 126 yards.

Glenn said dealing with the wind was difficult.

“It was pretty bad,” he said. “I actually thought I was going to throw a pass to myself, let the wind blow it back to me.

“The offensive line and Cobb did a good job running the ball.”

Glenn will certainly be a pivotal figure this week as he prepares to lead the Ticats into Winnipeg. He spent five seasons with the Bombers before being released following the ’08 season.

Glenn has repeatedly stated this season he’s not a vengeful person and isn’t bent on redemption any time he faces his former team. But the nine-year CFL veteran understands he’s going to provide the most compelling storyline heading into the contest.

“I’m not looking forward to it but you know that’s what’s going to happen,” he said. “I’ve been here a while to understand the significance of the game.

“You don’t get caught up in all that. You let the media do what they do best; create the stories and we just go out and play football.”

Saskatchewan’s Luca Congi had a field goal but missed attempts of 55 and 50 yards with the wind in the third. Louie Sakoda added a single while the other points came on a safety.

NOTES: Cobb went over 1,000 yards rushing for the season on his TD run, the first Ticat to do so since Troy Davis in 2004, the last time Hamilton made the CFL playoffs. Cobb is also the record seventh player to do so in ’09 . . . At halftime, the Ticats honoured their ’99 squad that won the club’s last Grey Cup title . . . The first quarter had been a problem this season for Hamilton. Coming into Saturday’s game, the Ticats had been outscored 131-58 in the opening frame, the only one they’ve been outscored in all year . . . Glenn began his CFL career with Saskatchewan, signing with the club as a free agent in 2001 . . . Saskatchewan has seven players on its active roster who were selected in the first round of the CFL’s Canadian college draft . . . Durant surpassed the 4,000-yard passing plateau, becoming the fourth Riders quarterback to do so in a season, joining Kent Austin, Henry Burris and Kerry Joseph.