How the West was won: Riders finish 1st 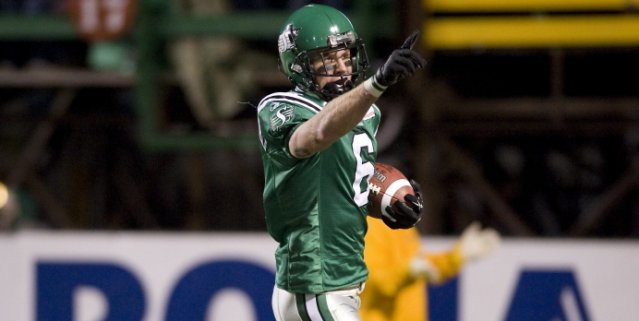 How the West was won: Riders finish 1st

Darian Durant threw two touchdown passes, including a 25-yarder in the second quarter to Rob Bagg, as the Riders clinched their first West Division regular-season title since 1976 with a 30-14 win over the Calgary Stampeders on Saturday.

Bagg’s touchdown put the Riders ahead 18-1 and stood up at the end as the deciding score.

“It was early in the game, there was a lot more football to be played, but I only had one catch so it’s always great when it’s a touchdown,” said Bagg.

Saskatchewan (10-7-1) and Calgary (10-7-1) finished with identical records but the Riders won the season series against the Stamps.

“It’s a great deal of satisfaction for me to accomplish something that hasn’t been done for a long time, but I’m a lot like the men in the locker-room,” said Saskatchewan head coach Ken Miller, the recipient of a celebratory ice bath from his players.

With the win, Saskatchewan earned a bye to the West Division final while Calgary will face the third-place Edmonton Eskimos in the West semifinal.

“It means a lot of things,” said Bagg. “We’ve got a lot of guys that are a little banged up still, so that extra week just to get healthy is going to be massive.”

The duo connected for four receptions totalling 48 yards on the Roughriders’ game-opening possession. That 10-play drive concluded with a nine-yard touchdown pass from Durant to Chris Getzlaf.

Durant finished the quarter 7-for-9 for 70 yards, and the game 24-for-36 for 296 yards and two touchdowns. In his two previous games against Calgary this year Durant had thrown for 684 yards and five touchdowns.

Fantuz had over 100 yards for the second straight game against the Stamps, leading all receivers Saturday with 12 catches and 123 yards.

“Andy stepped up huge, made a ton of catches, Double D (Darian and Durant) played great, I can’t give enough kudos to the defence, everybody just played a great game,” said Bagg.

The Stampeders made things close thanks to field goals of 22 and 24 yards by Sandro DeAngelis, and a one-yard touchdown run by Henry Burris.

They trailed 21-14 at the three minute warning but conceded a safety on the next play to put the Riders up by nine.

Defensive end John Chick sacked Burris for a 13-yard loss two plays prior, setting up a second-and-34 situation that Calgary could not convert.

“We needed a big stop and that was huge … I don’t know how to describe it,” said Chick.

DeAngelis’ second field goal came less than four minutes after his first, after the Stamps recovered an onside kick on the ensuing kickoff.

Burris completed 15 of 25 passes for 221 yards with one interception.

Calgary slotback Joffrey Reynolds was the game’s leading rusher with 107 yards on 17 carries, surpassing 100 yards rushing in all three games against the Riders this year.

The West semifinal is scheduled for Nov. 15 in Calgary while the West final will be played Nov. 22 in Regina.