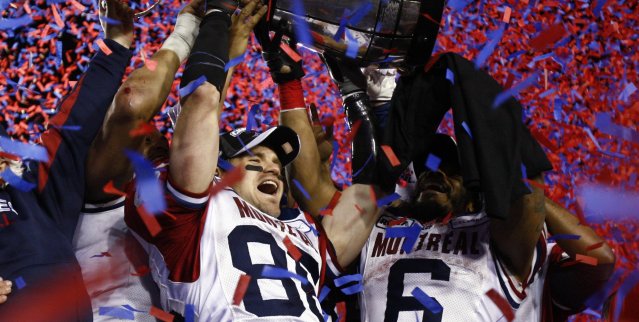 CALGARY — It took a lucky break on the final play of the game, but the Montreal Alouettes’ run of Grey Cup futility is over.

Damon Duval, given another try due to a penalty after missing what could have been the game-winning kick, made good on his second chance from 33 yards to lift the Alouettes to a stunning 28-27 victory over the Saskatchewan Roughriders in a classic CFL championship game on Sunday.

It was a shock ending for most the sell-out crowd of 46,020 at McMahon Stadium, where the seats looked to be tinted Roughriders green from fans who had spent most of the game watching their underdog team outperform the Alouettes on a mild evening.

But quarterback Anthony Calvillo and the Alouettes, both shaking off a reputation for coming up short in the big game, battled back to erase a 16-point deficit in the final 10:52 of play and end a four-game Grey Cup losing streak over the past seven years. They posted their sixth Cup win overall despite not leading until the final play.

“Heartbreaking, happy, sad, suspenseful – it was everything wrapped into one,” said Montreal’s veteran centre Bryan Chiu. “I guess that’s what the CFL’s about – a game like that.”

The Roughriders fell short in a bid for a second Grey Cup in three years and are now 3-14 all-time in championship games.

Duval’s first fluttering attempt from the 43 was nullified by a penalty against Saskatchewan for too many men on the field, which immediately drew comparisons to the Montreal Canadiens’ notorious Game 7 NHL semifinal win in 1979 when Don Cherry’s Boston Bruins were called for too many men late in the game and the Habs went on to win.

The Roughriders were tossing their helmets in the air in celebration and starting to invade the field, only for the play to be called back. The second attempt sailed through and this time, it was the Montreal bench that erupted.

“I just rushed it,” Duval said of the first try. “It took off like a bullet out of the gate and I knew before I kicked the ball there was no way I was getting my hips around to get it through.

“But luckily before the ball was even going I saw the flag and thought, OK, the man upstairs has given us another opportunity and we’re walking out with a win now.”

It was only their second win in seven CFL championship games since 2000, when they were beaten 28-26 by the B.C. Lions in Calgary after failing to make a two-point convert in the dying seconds.

“It’s sweet to come back and do this here,” said Chiu. “It’s come full circle.”

The Montreal comeback started just after Roughriders quarterback Darian Durant, the star of the game for much of the first 50 minutes but who had two second half interceptions, looked to have put the game away with a touchdown on a 16-yard run at 4:08 of the fourth quarter.

But running back Avon Cobourne, named most valuable player of the game for his 85 yards on 16 carries and 64 more on six catches, ran in from the three at 7:55.

Then, with 10 seconds left, Calvillo hit Kerry Watkins with a pass to put Montreal in range of a field goal and the unlikely win.

“There was ebb and flow in this game, but in the end, Lady Luck came into play for a moment and we were able to take advantage of it,” said Marc Trestman, a champion in his second year as coach after losing a Grey Cup to Calgary last year in Montreal.

Saskatchewan coach Ken Miller looked to be in a state of disbelief after the game. He would not name the culprit, saying only that a player on the field for Duval’s first kick should have come off but didn’t.

“It was a situation that should have been recognized by what we were doing,” said Miller, whose club was the least penalized in the league this season. “It’s just total, 100 per cent disappointment.”

Jamel Richardson also had a touchdown for Montreal and, for a second straight year, had more than 100 receiving yards in a Grey Cup game with 113 on eight catches.

Andy Fantuz also scored a TD for the Roughriders while Luca Congi had four field goals and Louie Sakoda a single.

Montreal was expected to win easily after a team-record 15-3 season, but 10-7-1 Saskatchewan’s defence countered their every move early on, holding them to just three points in the first quarter – their lowest total of the season. And a pair of Montreal fumbles in the first half helped the ‘Riders take a 17-3 lead

Durant mixed the pass and the run to move the ball consistently and set up points against the team that all season had the league’s top defence, especially against the ground game.

His first drive led to a Congi field goal attempt that sailed wide, but the second produced a three-pointer.

Late in the first quarter, Marcus Adams stripped the ball from Calvillo and big Keith Shologan lumbered to the Montreal eight. On the next play, Durant found Fantuz open in the end zone on a slant pattern for a 10-0 lead.

The Alouettes looked to have their offence back on track as a pair of passes to Cahoon set up a 28-yard Duval kick early in the second quarter. They were pressing again but missed a chance to add to their score when fullback Kerry Carter fumbled on the Saskatchewan 17.

Then the usually reliable Duval shanked a second punt in a row – this one travelling only seven yards. Congi turned that into a 44-yard field goal and Sakoda followed with a single on the ensuing kickoff.

“The ball slipped out of my hands, but in the second half I put a glove on my right hand and fixed that problem,” Duval said.

On the next-to-last play of the half, Durant found Fantuz on the Montreal two – a play that stood up after video review showed he stayed in bounds – and Congi closed the half with a nine-yard field goal.

Calvillo, given the game ball by his teammates, led a nine-play drive early in the second half capped by an eight-yard TD toss to Richardson, but a Congi field goal and Durant’s TD, when the Saskatchewan looked to be running the ball at will, looked to have sealed the win.

“We were in the locker-room at half time and we regrouped,” said Cobourne. “We didn’t come out with the intensity we needed and it showed.

“But then we got that feeling in our hearts. Once we started playing, we are the best team in the CFL for a reason – because we make plays.”

The Alouettes reached their seventh Grey Cup since 2000 with a 56-18 blowout win over B.C. last week, while the 10-7-1 Riders downed Calgary in the West final. Both teams were playing their 17th Grey Cup game.

Notes: Cahoon got the 18 yards he needed to pass former Alouette Hal Patterson’s record of 580 receiving yards in career Grey Cup games. He now has 620. The record had stood since 1964. . . . Montreal and Regina played in the 1931 Grey Cup, but it was Montreal A.A.A. and not the Alouettes who won 22-0. . . . Montreal special teams tackler Paul Waldu, a Regina native, was not in the lineup, while rookie J.P. Bekasiak dressed as a back-up offensive lineman in place of Shawn Mayne. . . . The ‘Riders scratched Hugh Charles, Clifton Washburn, Kevin Scott and Joe Sykes.