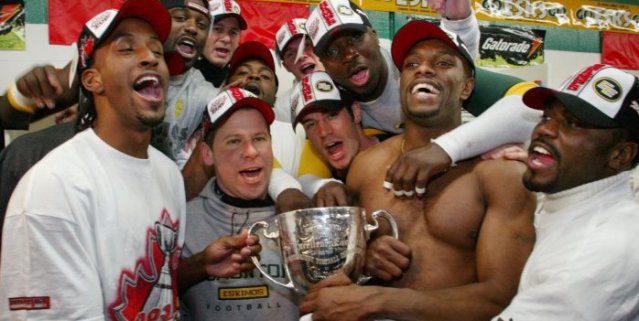 REGINA — In 1975 and 1978, the Montreal Alouettes had an opportunity to defend their Grey Cup championship from the previous season against the Edmonton Eskimos. Both times they failed. History repeated itself a third time, as the Eskimos won their first title since 1993.

Edmonton Eskimos wide receiver Jason Tucker catches a pass for a touchdown during the second quarter of the 2003 CFL Grey Cup.

A sold-out crowd of 50,909 at Taylor Field in Regina saw the Eskimos draw first blood early in the game as former Alouette running back Mike Pringle scampered four yards for a touchdown. Pringle finished the game with 70 rushing yards.

That was a quiet beginning to what was to come in the second quarter, when five touchdowns and a total of 38 points were scored. The Eskimos improved their lead to 14-0 when Ricky Ray completed a 41-yard pass to Jason Tucker.

Just when the Alouettes looked out of it, they came roaring back to tie the score. Pat Woodcock scored on a four-yard halfback option pass from running back Deonce Whitaker, and Sylvain Girard caught a 32-yard touchdown pass from quarterback Anthony Calvillo.

Tucker restored Edmonton’s lead with his second touchdown reception, this time spanning 15 yards. But Montreal receiver Ben Cahoon answered back with a 27-yard catch on a ball thrown by Calvillo.

With the game tied at 21, Sean Fleming put the Eskimos ahead for good with a 27-yard field goal with 11 seconds remaining before halftime.

Montreal’s Keith Stokes turned the ball over two times on a pair of punt returns, costing the Alouettes 10 points.

The third quarter was night and day compared to the second, as Matt Kellett’s 75-yard punt for a Montreal single was the only point scored in the quarter.

The Eskimos secured the title in the final 15 minutes. Ray scored a touchdown on a one-yard run, and Fleming booted a 17-yard field goal in the final minute. Ray completed 22 of 32 pass attempts for 301 yards and two touchdowns.

Alouettes head coach Don Matthews was criticized for starting two rookie cornerbacks in D.J. Johnson and Brandon Williams in such a big game.

It was the Eskimos’ 12th Grey Cup in franchise history.