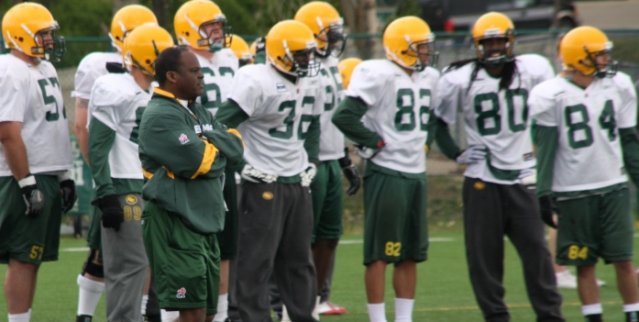 Training Camp begins on Sunday for the CFL and many may think that the players and coaches have been the only ones preparing for this day, but the fans have been preparing too.

Since the season ended on November 29th in Calgary fans have been counting down the days to the start of the next CFL season. Many fans like me have been following every signing, every release, every trade, and every draft pick.  A fan wants to be prepared going into training camp, and this fan takes her job very seriously. Hours are spent reviewing the roster of my team, memorizing every statistic available, jersey numbers, and positions. Some predictions are made over chats with fellow fans from across the league.

The players arrive to be fitted for equipment and go through fitness testing. The fans follow a similar ritual: jerseys, hats, flags come out of storage and are dusted off.  Stadium food starts to be introduced into the diet. Fans begin to train, practicing cheers, reviewing and practicing superstitions ensuring not to jeopardize their team before the season even starts. Season tickets arrive and the excitement is beginning to build. Everything is starting to fall into place for training camp to start.

When the big day is finally here and training camp opens, this fan gathers with fellow Eskimo fans and has a breakfast tailgate before the first session. It feels good to be back at the stadium. I can smell it; football is in the air.  It has been a long off season, there is some talk of the season past but with training camp beginning all eyes are on the upcoming season. The players begin to file out onto the field and us fans head to our seats ready to take in the action and watch our 2010 Eskimo hopefuls become a team. Yes it feels great to be at training camp, football is finally here!

Theresa Tsoukalas is a passionate fan of the Edmonton Eskimos. She posts on Twitter as @TheEskieChick.