New CFL-CFLPA CBA at a glance 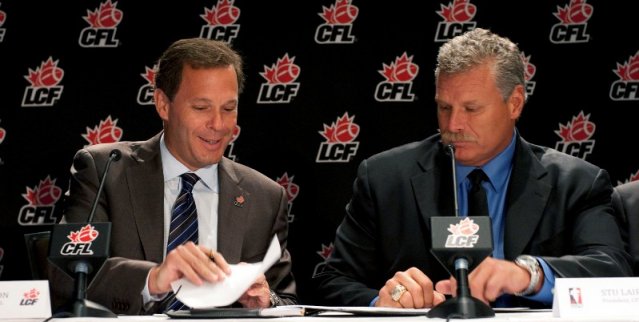 New CFL-CFLPA CBA at a glance

The term of the new agreement is four years, covering the 2010 to 2013 seasons and expiring the day before training camp starts in June 2014.

Previously, the CFL set its annual salary cap, but had to make a payment to the CFLPA if it turned out to be less than 56 per cent of defined revenues. Now, the CFL continues to set the cap, but it must be at or above a pre-established and fixed amount, one that has been determined by negotiation with the players association and will not vary according to league revenue performance.

The negotiated minimum caps during the term are as follows;

Any increases in the cap beyond these amounts would be at the sole discretion of the Canadian Football League Board of Governors.

The agreement sets out that salaries paid per team cannot fall below a certain threshold. The minimum team salaries during the term are as follows:

The agreement increases the minimum salary that can be paid a player. The minimum player salary amounts during the term are as follows:

The annual player pension amounts during the term are as follows:

During the term, these pension increases are to be matched dollar for dollar by the players.

There is no change to the amounts that exist within the previous agreement, with the exception of First Place Standing, Semi-Final Participation and Division Championship Participation in 2012 and 2013.  In these years, there is a one-time increase of $100 per player per game from the 2011 amount.

The CFL will continue to be one of the only professional sports leagues with true free agency when a player has played out his contract.

But the agreement does phase out the NFL option window, eliminating it following February 2012. That window permits CFL players to sign with an NFL team between January 1 and February 16 of the ‘option year’ of their contract.

Under the new agreement, in February 2011 and February 2012, it will only be available to players with existing contracts (determined as of 30 days following the date of ratification) whose option years fall in 2011 or 2012.

Any new contracts (signed after 30 days from ratification) will not have the benefit of the NFL option window in any year.

Member Clubs will be entitled to conduct an off-season workout upon the following conditions:

•    They must be voluntary;
•    Helmets only drills, and no full contact;
•    They must take place between February 1 and April 30, with players given 30 days written notice in advance;
•    They must be no longer than three (3) days in duration;
•    Players must be paid a per diem, in addition to being provided meals, travel and lodging;
•    Any veterans injured while participating shall receive medical benefits and compensation payable under their Standard Player Contract until they are medically cleared to resume play;
•    Participation in practices or meetings is limited to 4.5 hours per day.

All Quarterbacks on a Member Club’s roster may voluntarily report to training camp on the Monday prior to the commencement of camp.

There is no change to the provisions of the previous agreement relating to practice times.

Definition of a Non-Import

The definition of a non-import is expanded to include a player who is a Canadian citizen and was physically resident in Canada for an aggregate period of five (5) years prior to the age of 18 years.

There is no change to the provisions of the previous agreement relating to the designated import.

Injury grievances will continue to be decided by a neutral doctor. However, a club may now request a player to submit to an exit physical prior to termination.

The current arbitration system has been maintained, with the following amendments:
•    The CFLPA and the CFL and its clubs must use best efforts to expedite the arbitration process once a notice to arbitrate has been filed; and
•    The list of arbitrators has been changed, and is to comprise four individuals in total – two located in eastern Canada (east of Winnipeg) and two in Western Canada (Winnipeg and west).

The maximum player fine has been established at one-half of one game cheque.  This limitation is consistent with the CFL’s historical practice.

Medical coverage has been extended to one year from the date of injury.  The previous agreement terminated coverage on the date of the following year’s training camp regardless of when the injury may have occurred during the season.

The CFL will make an annual payment to the CFLPA to assist in providing post-career and financial counseling for the players.

The CFL shall pay a flat, annual fee to the CFLPA in return for:
•    Promotional or commercial usage by the CFL, Member Clubs or sponsors of images or video of players in game uniform (individual or in groups), provided that such use does not equate to a direct commercial endorsement by the player;
•    Royalty-free license to sell CFL jerseys including player names, and retain all associated revenue; and
•    Continuation of the right to include sponsor logos on CFL jerseys.

This provision creates more efficiency and administrative ease for the league office, the Member Clubs and the players.

•    Member Clubs may bring in a maximum of two injured veter
ans to training camp, with the players’ consent, before requiring them to complete a physical, providing injured veteran players with greater opportunity to attend training camp.

•    Several other smaller “housekeeping” items have been addressed within the CFL Regulations and By-laws.