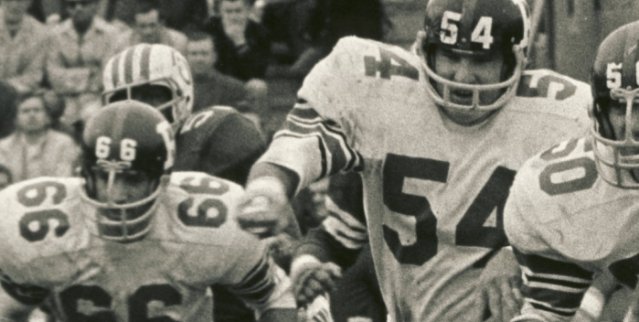 The Ottawa Rough Riders embarked on a new decade in the 1970’s minus a living legend.

Quarterback Russ Jackson retired in 1969 after a 12 year career and three Schenley Awards for Most Outstanding Player. The Hamilton, Ontario native headed directly for the CFL Hall of Fame. Jackson guided the ‘Riders to back-to-back Grey Cup victories his last two seasons and is regarded as the greatest Canadian quarterback to ever play the game.

Following the ’71 season a trio of Rough Rider stars also said goodbye to the league. Two Canadians, running back Ron Stewart (1958-70) and wide receiver Whit Tucker (1962-70), along with running back Vic Washington (1968-70), left only memories for CFL fans.

Under CFL Coach of the Year, Jack Gotta, the ’73 Riders took to the field against the Edmonton Eskimos at Exhibition Stadium in Toronto for the 61st Grey Cup. The Eskimos were led by veterans Tom Wilkinson and Bruce Lemmerman.

Rick Cassata was filling in for an injured Jerry Keeling at quarterback for Ottawa. Cassata hit Rhome Nixon with a 38 yard touchdown pass in the first quarter and Jim Evenson (1973-74) ran for an 18 yard major in the third quarter as the Rough Riders won 22-18. Ottawa defensive end Charlie Brandon was named the game’s Most Valuable Player.

The ’76 game provided one of the most exciting finishes in Grey Cup history. Ottawa had the ball at the Saskatchewan 24 yard line with 20 seconds to play and trailing by four points.

Tom Clements (1975-78), and ex-Notre Dame quarterback, hooked up with Hall of Famer Tony Gabriel (1975-81) deep in the end zone on a last minute scoring toss to beat the Ron Lancaster-led Roughriders 23-20.

Ottawa dominated the Most Outstanding Canadian Player Award in the 70’s as they won the trophy on five occasions. In addition to Gabriel, kicker Gerry Organ (1971-83) won the award in 1973 and slot back Jim Foley who played with the Riders from 1973-77 continued the tradition in 1975.

Jerry Campbell anchored the Rider defense and was arguably the best middle linebacker in Rough Rider history. In eight seasons with Ottawa (1968-75) he was a CFL all-star seven consecutive years (1969-75).

1974 saw the end of a 17 year career by offensive lineman and kicker Moe “the Toe” Racine. Racine’s #62 was retired by the club at the end of his final season.

For the second half of the decade Clements and Condredge Holloway (1975-80) formed an explosive tandem at quarterback for the ‘Riders. Holloway, from Tennessee, would win a Grey Cup with the Argos in 1983. He was elected to the Hall of Fame in 1999 while Clements was inducted in 1994.

Overall it was an outstanding decade for the team from the nation’s capital. After missing the playoffs in 1970, The Rough Riders made the post season nine straight years. From 1977-79 they lost the East Final to the powerhouse Montreal Alouettes three times in a row.

Several players put together Hall of Fame careers and the Ottawa Rough Riders played in two Grey Cup games – they won them both.