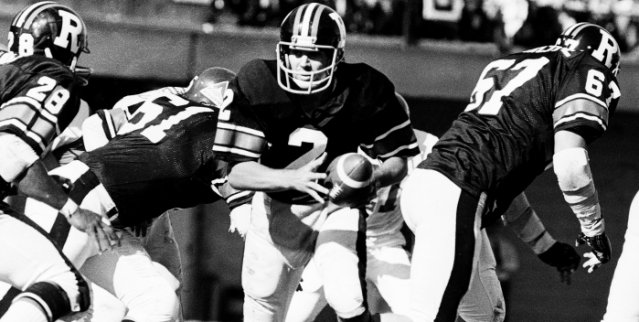 It was one of the most memorable touchdown passes in Grey Cup history.

With time running out in the 64th Classic the Ottawa Rough Riders were set up on the Saskatchewan 24 yard line. They trailed by a score of. 20-16. There were less than 30 ticks left on the clock and many in the crowd of 53,467 at Exhibition Stadium in Toronto were on their feet. Quarterback Tom Clements dropped back in the pocket, rolled slightly to his right, and spotted a streaking Tony Gabriel, in behind Ted Provost, deep in the corner of the end zone.

The play has been on many a Grey Cup highlight reel over the years. Gabriel of course made the catch and the Eastern Riders went on to win the 1976 Grey Cup in a thriller, 23-20 over their Green and White rivals from the prairies. For his efforts, Clements was named Most Valuable Player of the game.

“Gary Kuzyk came running into the huddle with a call from the sidelines,” Gabriel recalls of the historic play. “Tom Dimitroff, our offensive coordinator sent in the play. Tommie said, ‘No, no we’re going to go with this’. He called ‘ROBB1 fake34 tight end’ which was a fake to the fullback and made me the primary receiver in the end zone. Tommie was very clear on it. He knew what he wanted.”

The QB who threw that pass was one of the best in Ottawa and CFL history.

Tom Clements had led the Notre Dame Fighting Irish to a national championship in 1973 and finished fourth in Heisman Trophy balloting his senior year. He came to the Riders in 1975 and immediately made his mark, as he became the first Ottawa player to be named the CFL’s Most Outstanding Rookie.

Proving his first year north of the border was no fluke, the McKees Rocks, Pennsylvania native led his team to the Grey Cup his second year.

“Tom was low-key, very confident and had good command as a leader,” says Gabriel, who played with Clements for the Notre Dame’s star entire career in Ottawa. “He didn’t yell, he led by his knowledge of the game. He led by his actions. He excelled as a rookie. He didn’t get overly excited on the field. Even if he got roughed up running the ball, he was up and calling the next play. He was very cool, calm and collected. He really caught the attention of the veterans and we listened to Clements and had a lot of confidence in him.”

For most of his time in Ottawa Clements shared the duties with Condredge Holloway, providing the Riders with one of the best quarterbacking tandems in CFL history. He was an Eastern all-star five times including 1975 ‘76 and ‘77 with Ottawa. He went on to play for Saskatchewan and Hamilton before finishing up his 12 year career with Winnipeg in 1987. By the time he had retired in ’87 Clements had completed 2,807 passes for 39,041 yards and 252 majors. Equally dedicated off the field as he was on it, Clements graduated from Notre Dame with a Law Degree in 1986 while still playing in the CFL.

In 2004 Clements was inducted into the City Of Ottawa Hall of Fame along with fellow quarterbacks J.C. Watts, Rick Cassata and the aforementioned Holloway. He asked Gabriel to fill in for him as he was unable to attend the dinner and induction held just before the Grey Cup that year.

“He called and asked if I would speak on his behalf,” says Gabriel, “and I was pleased to do so. The thing I remember about Tom was his coolness and awareness. Despite the battle going on in the game he always had the ability to find the right call to win the game.”

Clements was inducted into The Canadian Football Hall of Fame in 1994.

“He was most definitely one of the best quarterbacks I ever played with,” Gabriel adds. “He had such a knack of being able to find a receiver. He had pretty good wheels and was exceptional when he got outside the pocket. He really had tremendous ability to find and locate a receiver. When he needed someone to get open we just connected. ”

Following his retirement Clements practiced law for five years in Chicago and was an Adjunct Associate Professor of Law at his alma mater in 1994.

For the past fourteen seasons Clements has been involved in coaching, both at the collegiate and professional levels. He coached at Notre Dame from 1992-95 and got his first assignment in the NFL as quarterbacks coach for the New Orleans Saints in 1997.

Over the past 14 years Clements has served with a number of NFL teams including the Saints, the Kansas City Chiefs and the Pittsburgh Steelers. He was the offensive coordinator for the Buffalo Bills from 2004-05 and joined the Packers in 2006. The former CFL star is entering his fifth season with Green Bay and has coached both Brett Favre and current starting quarterback Aaron Rodgers.

Clements lives in Green Bay with his wife Kathe. The couple has a son Tom and daughter Stevie.