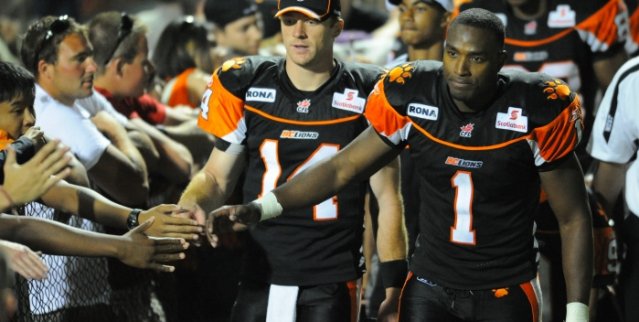 VANCOUVER — A helmet-throwing sideline tantrum was the tipping point that led to Wednesday’s release of B.C. Lions quarterback Casey Printers.

“Over a period of time, things started to go in the wrong direction … and it pretty much came to a head at the end of the Winnipeg game,” Buono said Wednesday.

Printers, 29, had come on in relief of starter Travis Lulay, who injured a finger on his throwing hand but will return to action this week.

The loss came with B.C. leading 32-11 in the fourth quarter and kept alive the playoff hopes of the Bombers and the Edmonton Eskimos who are also 4-10 and face the Lions here Saturday.

Printers ended the game by throwing an interception that Deon Beasley returned for a touchdown.

The petulant Printers threw his helmet on the sideline and was captured by TV cameras berating O’Neil Wilson, his intended receiver.

Buono said the club had been losing confidence in Printers for some time. He lost his starting job to Lulay two weeks ago after committing five turnovers in 39 minutes over a two-game period.

“It’s always building for all of us,” Buono said when asked when the club’s confidence in Printers began to evaporate.

Despite being on the receiving end of Printers’ rant, Wilson defended him after hearing the quarterback had been released.

“Me, personally, I didn’t lose confidence in him,” said Wilson. “He’s a great athlete and he knows what he’s doing out there. It just goes like that sometimes.

“I was really surprised, just like the rest of our teammates. … It’s an emotional game, it’s going to happen. Unfortunately it happened in public.”

“This is the man that was paid to be our leader,” said Reid.

“This is the man that was the face of the franchise. Forget performance on the field. Post-game actions like that … from your leader … makes everyone question what’s happening because the team is a reflection of their leadership. That’s your leader?

“This is how he handles a disaster? Publicly like that? You can’t have that.”

Printers started the first three games of the season before being sidelined with a knee injury. He returned as a starter in Week 8 before losing that role to Lulay.

He had completed 129-of-237 pass attempts, a 54-per-cent rate that was 13th among CFL QBs. He had 10 touchdown passes and six interceptions and ranked ninth in passing efficiency.

The undisciplined Lions came unglued earlier in the fourth quarter against Winnipeg and penalties that included an ejection and a roughing call put Winnipeg in range for the tying field goal.

At one point B.C. had piled up so many penalty yards that the Bombers kicked off from the Lions’ 35-yard line.

“The timing maybe wasn’t perfect,” Buono said of Printers’ release. “What occurred in the fourth quarter maybe was embarrassing to all of us. The B.C. Lions as an organization don’t condone that kind of behaviour.

“We worked hard for many, many years to build our reputation up to an organization that has some dignity, has some class and has some discipline. In the fourth quarter there was none of that.

“I told the players that’s my responsibility but it’s also theirs too.”

When Printers signed a contract extension in the off-season, he said he’s a team guy and told reporters: “For me, the reason I am standing here today as grateful as I am is that I realize it is not about me.”

Buono said at the time he expected Printers to be the Lions’ starter for years to come.

“I’m disappointed for Casey because I felt genuinely that it could work,” Buono said Wednesday.

The coach indicated Printers, the highest-paid player on the Lions, took his release with surprise and disappointment.

“Casey’s human like you and I,” Buono said. “If I were fired today, I would be surprised. I would be disappointed because you worked hard to get to this point … to be disappointed, to be heartbroken would be understating it.”

Printers’ release is another low point in a career that also included his release two years ago from the Hamilton Tiger-Cats.

He was the CFL’s MVP in 2004 in his first tour of duty with the Lions but left in 2006 amid a quarterback controversy to sign with the NFL’s Kansas City.

Printers spent the 2006 season on the Chiefs practice roster after leading the Lions to the 2004 Grey Cup game when starting quarterback Dave Dickenson was injured.

Dickenson started the championship game and reclaimed the Lions’ No. 1 role next season.

Printers returned to the Lions when they were hit by a series of injuries at the quarterback position last year.

Printers started and won two of the last five games of 2009, enabling 8-10 B.C. to become a crossover playoff team in the East Division.

The Lions won the East semi-final 34-27 in Hamilton but were blown out 56-18 in the final by the Grey Cup champion Alouettes in Montreal.