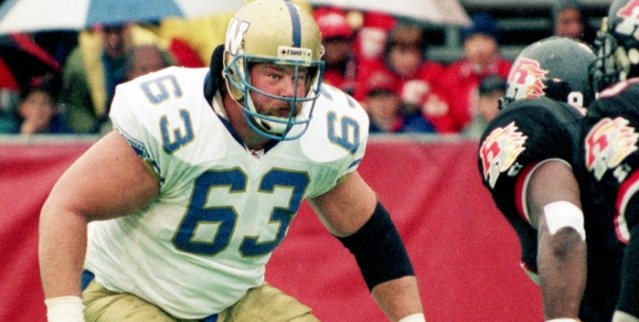 WINNIPEG — Life after football can be an intimidating time for even the toughest players who have ever played the game.

Fortunately for Chris Walby, he has transitioned admirably into retirement following 16 years of service with his hometown Winnipeg Blue Bombers as arguably the best Canadian offensive lineman to ever throw on the pads.

Chris moved comfortably from the gridiron to the broadcast booth as CFL on CBC studio analyst in 1997 and then as colour commentator from 1998 to 2007 shortly after completing his football career in 1996.

Outside of the booth, the nine-time CFL All-Star faced a familiar obstacle that all athletes encounter when they step off the field of play – finding new ways to stay physically active upon retirement.

So when the opportunity presented itself to take part in this year’s Herbal Magic Weight Loss Cup, the timing worked out perfectly for the former star.

The Herbal Magic challenge began in April featuring eight CFL alumni representing each of the league’s eight teams, competing not only against each other but with themselves to adopt a healthier lifestyle.

Giving credit where credit is due, Walby has worked out consistently since retiring, “lifting (weights) five or six times a week,” but it has been difficult without the demanding physical regiment of professional football.

“From a career guy that used to be in the gym a lot, it’s easy to fall off,” explained Walby. “So I have to make sure I stay on that (from now on).”

Add getting married over the summer, along with a full travel schedule as the manager of a pharmaceutical company and the task to stay in shape suddenly becomes increasingly difficult.

Walby compliments the staff at his local Herbal Magic nutrition centre in Winnipeg for conveying the message in a way that was eerily reminiscent of someone from his playing days. “They got in my head,” jokes Walby. I feel like I’m going to see (former coach) Cal Murphy again because I’m panicking to get on that scale. The motivation of the weigh-in has kept me in check.”

The progress he has made speaks for itself, having trimmed down to 319 pounds since beginning the competition at 373. In all, Chris has shed an astonishing 54 pounds from his 6’7” frame by staying strict to the Herbal Magic diet and remaining consistent with his portion sizes when meal-time comes around.

Walby has been disciplined enough to give up his favourite comfort foods but is realistic when assessing his overall transformation.

“I don’t believe you can ever change your life 100 per cent. Without having something to look forward to, I would go stir crazy, so I allow myself one day (to have) beer.”

With the occasional frosty beverage in tow, Chris kindly reminisces about his playing days at Maroons Road.

Having made a living protecting the quarterback, when asked which QB best commanded the huddle, it wasn’t an easy question given the solid signal-callers Walby defended during his heyday.

“I was blessed. I started with Dieter Brock then I moved to Tommy Clements, Johnny Hufnagel, Matt Dunigan and Danny McManus. They’re all brilliant, they saw the game so well,” responded the No. 22 player on TSN’s all-time list of top CFL players named in 2006.

During Walby’s reign anchoring the Bombers offensive line, Winnipeg never missed the playoffs, appearing in five Grey Cups and winning three championships in 1984, 1988 and 1990 respectively. He also earned two CFL Most Outstanding Lineman awards in 1987 and 1993 for his exceptional play.

Individual accolades aside, Walby has endured a career that has taken a toll on his body but it’s something he would never trade for the memories he has enjoyed with teammates.

“(I miss) the locker room. What we had at the time was pretty special. I miss the guys and the stories and the laughter. I don’t miss practicing, I don’t miss playing, I miss my teammates.”

The future is bright for Walby as he embarks on a new chapter in his life and improving his outlook on eating healthy will only lead to more promising results.

After a valiant effort, the contest wrapped up this week with Chris falling just short of former Calgary Stampeder Gerry Dattilio, placing second in the 2010 Herbal Magic Weight Loss Cup.

But regardless of his final standing in the competition, one thing is for sure, Chris has found a system that works best for him.

He can still kick back with a cold beer at the cottage and watch some great CFL football on the weekend, but now he is more aware of taking things in moderation.

“You have to have bits and pieces of what you really like and (this diet) allows me to have a couple cold ones and still have a life, so I would recommend it absolutely. Check your pride at the door, you have nothing to lose.”

Cheers to maintaining a healthy and active lifestyle.