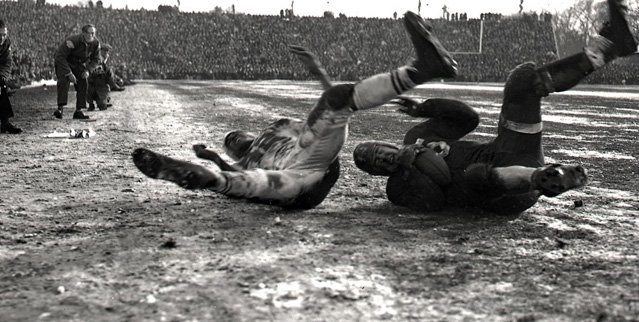 Today marks the 60th Anniversary of the 1950 Grey Cup game where the Argonauts defeated Winnipeg in what is now known simply as the ‘Mud Bowl’. The Boatmen celebrated anniversary of the storied game at the club’s October 29th contest versus the Montreal Alouettes with a halftime presentation and concourse exhibit.

More About The Mud Bowl:

The 1950 Grey Cup is remembered more for its poor field conditions than the actual game itself.

The Mud Bowl featured two teams facing each other for the sixth and final time at the Canadian football classic. The muddy conditions at Toronto’s Varsity Stadium made for a lacklustre game, but didn’t prevent the Argonauts from winning their eighth Grey Cup title.

The Argos kicked for what turned out to be the winning point in the first quarter. Winnipeg’s Tom Casey misjudged Joe Krol’s punt from the Blue Bombers 49-yard line, as the ball went over his head and into the end zone for a rouge.

Krol avoided a potential turnover later in the half when he dropped the ball on an attempted kick in Bombers territory. Krol picked it up and raced around the end for 10 yards, putting the ball on the Winnipeg 15. After failing to make another first down, Nick Volpe kicked a 21-yard field goal to put the Argos up 4-0.

Before the end of the first half, the Argos increased the margin to 7-0. Toronto’s Billy Bass recovered Indian Jack Jacobs at the Winnipeg 19. After two running plays from Ulysses ‘Crazy Legs’ Curtis and Teddy Toogood, Volpe was successful on a field goal from the Winnipeg 23.

The Argos completed the scoring in the third quarter. Toronto’s Jake Dunlap blocked Jacobs’ kick which the Boatmen recovered at the Winnipeg 20. Billy Bass and Al Dekdebrun carried to the four-yard line, and Toogood to the one. On third down Dekdebrun slid across the goal line for the only touchdown of the game. Volpe missed on the convert, but Krol later kicked a single for the final point of the game.

As for the Canadian Rugby Union, they were criticized for the poor field conditions. Some pointed to a lack of tarpaulin at Varsity Stadium; others believed the game could have been played a week earlier to avoid adverse weather conditions. Wrote one writer, “Because the field was like a pig’s wallow, what should have been a football classic turned into a slogging show.”

It was the last time a team has been shut out in the Grey Cup final.

– With files from CFL Grey Cup