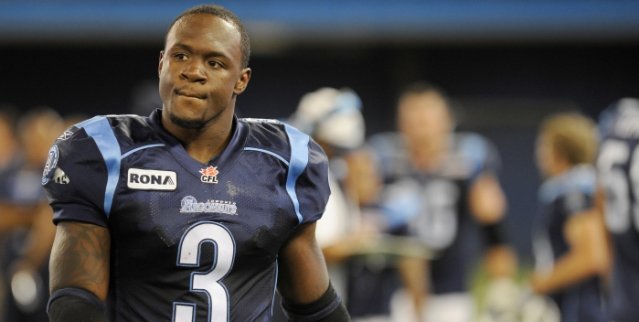 TORONTO — Cory Boyd paces across a stage during an assembly at Sandalwood Secondary School. One hand is gripping a microphone while the other is in his pocket. He looks ahead as he walks back and forth, but when he wants to emphasize a point, he looks at the 400 high-school students sitting in front of him.

The 25-year-old Toronto Argonauts running back is talking about a deeply personal issue. Boyd grew up in the slums of Orange, N.J., where he was bullied by kids at school and also by family members at home. Having made it out, he is now a spokesperson for the Argos’ Huddle-Up Bullying Prevention Program. This week he delivered his first speech as part of the program.

“A lot of his stories are just overwhelming, just incredible,” said Jason Colero, who founded the Huddle-Up program 10 years ago and now serves as the Argos manager of community relations. “His stories are up there with some of the craziest things I’ve ever heard.”

Boyd grew up as the only child of a single parent. His mother, a drug dealer, was arrested and went to prison where she died of a heart attack. Boyd was raised by his grandmother.

“When you think of family, you think of love and support, and that’s not what I had at first,” Boyd says. “I had people pushing me around and telling me I’d be dead or in jail by the age of 12. They did not have belief in me. To hear those words, it kind of pushed me into a sad head space and kind of got me down.”

From home, Boyd went to school where the bullying continued.

“In elementary school, I was afraid to go to school with lunch money, toys or even Christmas gifts because there were these two guys who would pick on me.”

One day Boyd decided to exact revenge on the bullies via a dodge ball game during gym class. He was a team captain and made sure the bullies did not end up on his team. Then he dominated them on the court. Boyd felt good about himself, but that feeling did not last.

“An hour later reality set back in,” he said, eyes glued to the ground. “I got beat up really, really bad.”

Boyd decided something had to change, so he became close with one of the kids who had been picking on him. He figured this would offer him protection.

“My story is unique because I went from being bullied to being a bully myself.”

The plan backfired. One night Boyd and his new friend were walking around causing trouble when they picked on the wrong guy. A fight broke out and Boyd and the bully were taken into police custody. His friend was charged while Boyd, who did not throw any punches, was released.

“The guys we had started up with were angry, and when I got out they beat me down seriously. They beat me down to the point where I wasn’t recognizable. My face was lumped all up.

Boyd started playing football and used the sport as an outlet for his angst. He earned a scholarship to the University of South Carolina, where he played well enough to garner attention from NFL teams. Boyd was selected in the seventh round of the 2008 draft by the Tampa Bay Buccaneers.

Boyd struggled to find his place in the NFL. He got in a fight with Tampa Bay’s top draft pick during an orientation session and was released quickly thereafter. He ended up in Denver where he spent most of his time on the practice roster. He was released in 2009.

“My experiences in the NFL weren’t good, but I know it’s a business. If an opportunity presented itself now, I wouldn’t be eager to jump toward it. The grass isn’t always greener on the other side. I liked this last year in the CFL and I’m looking forward to more.”

After suffering a concussion early in the Argos training camp in 2010, Boyd was released. He rejoined the roster a couple weeks later after recovering. He is grateful head coach Jim Barker gave him a chance.

“What I love about Barker is he’s all about giving us opportunities. Barker could have wrote me off a long time ago when I got my first concussion, but he cared. I admire that about him and that’s something I wish a lot of the NFL teams would do is have that head-coach-to-player relationship with an open door always there. I didn’t get that in the NFL.”

That is why Boyd, the Argos outstanding player nominee during his rookie season, opted to live in Toronto during the off-season. He is hoping to sign a contract extension with the Argos soon. He wants to get more involved in the community.

And while Boyd is enjoying life in Toronto he is not doing much these days other than working out and preparing for the 2011 season.

“I haven’t really been out honestly. I’ve been locking myself in the house only because I don’t want to let my fans down. I don’t want to let any of my friends down. This the time, right now, when things happen because you’re out there partying and drinking and stuff and I want to stay out of that. I’m tired of the negative.”

During his speech to students, Boyd decided to leave out some of the darker stories about his life.

Boyd’s cousin died of a gunshot wound in 1996. He raced to his side after hearing about the incident, but arrived just in time to watch him die.

After getting cut by Denver, Boyd was broke and considered working in the adult-film business to make ends meet. His relationship with his wife Brittany was on the rocks and at one point they separated. They are still together now although Brittany lives in Denver.

Then, during the 2010 season, Boyd learned that his good friend Kenny McKinley, a receiver with the Broncos, had taken his own life after suffering from depression.

“When I was going through everything I was like, ‘Man, why is this happening to me,’ but God reveals all things and I’m here to do his work,” Boyd said. “He didn’t bring me to Canada just to play football. He brought me here because there are a lot of ears that want to hear something positive. They want to hear about success. They want to hope.”

At the end of the assembly, Boyd asks a group of students who are involved in the Sandalwood Heights Alternative Re-engagement Program to join him on stage. The students in the program have struggled to find their way at the school. Boyd shakes hands with each of them before asking the other students at the assembly to applaud them.

When the assembly ends, students surround Boyd. He signs autographs and answers questions. Moments later, Boyd admits there is a degree of selfishness in his desire to be part of the Huddle-Up program. He is using the experience to help him launch the next stage of his life.

“If I can talk to a group of kids and have them relate to what I’m saying, they don’t know it, but they’re helping me grow just as much as I’m helping them grow.”