Haiti: Journey of a lifetime for CFL players 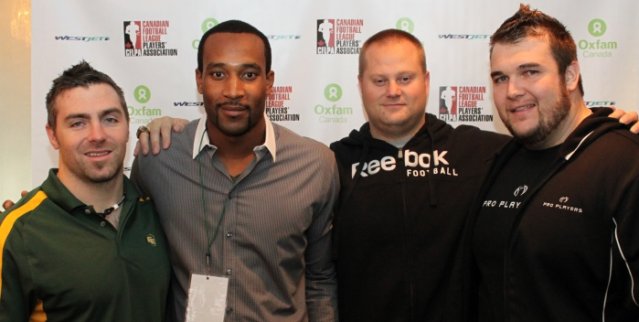 Haiti: Journey of a lifetime for CFL players

EDMONTON — Eskimo offensive linemen Kelly Bates and Aaron Fiacconi as well as fullback Graeme Bell, are among seven CFL players taking part in a humanitarian journey to Haiti as the nation gets set to observe the one year anniversary of the earthquake that devastated the country.

On January 12th, 2010 a 7.0 magnitude earthquake hit 25 km outside Haiti’s capital Port-au-Prince leaving an estimated three million victims in its wake. With an estimated 230,000 deceased by January 24th, the earthquake and its subsequent 52 aftershocks left an estimated 300,000 injured and another estimated 1,000,000 homeless. Since then, the nation, which was already one of the poorest countries in the Western Hemisphere, has been trying to rebuild what the natural disaster destroyed.

Bates, Bell and Fiacconi will be joining BC Lion FB Rolly Lumbala, LS Chris Cvetkovic and RB Yvenson Bernard of the Winnipeg Blue Bombers and Hamilton Tiger Cat OT Jason Jimenez for the 10-day humanitarian journey as they depart from Miami on Saturday, January 8th for Port-au-Prince. The group will visit several communities including Leogane, the town where the earthquake originated (known as an epicentre). The players will be joining members of CARE Canada, who have set up shop in Leogane to provide a community-based program that provides support and counselling for Haitian children and their families traumatized by the earthquake. The CFL members will facilitate a sports day with the children, as well as tour the facilities and programs CARE Canada has set up to provide support for the Haitians.

The trip to Leogane is one of several visits the Huddle for Haiti team will be making. They will also attend several memorial services including the one-year memorial service in Port-au-Prince on Wednesday, January 12th.

Throughout their journey, Kelly, Graeme, Aaron and all the other players will document their journey through photos, videos and blogs, which will be posted on the official Huddle for Haiti Facebook page, www.facebook.com/huddleforhaiti. The Edmonton Eskimos encourage fans to support the players by becoming a fan of the Huddle for Haiti Facebook page.

Dave Naylor of TSN will be joining the seven players on their journey to Haiti and will be providing stories, including live hits that will air on TSN Sportscentre on January 11th and 12th. Stories will air on TSN and TSN.ca.

The CFL wishes Kelly, Graeme, Aaron, Jason, Yvenson, Chris, Rolly and the entire Huddle for Haiti team the best of luck on their journey and look forward to their safe return. These individuals are great ambassadors for their respective clubs and the CFL and we wish them a safe and fulfilling journey.