Mullin: Changing the game – The Ratio 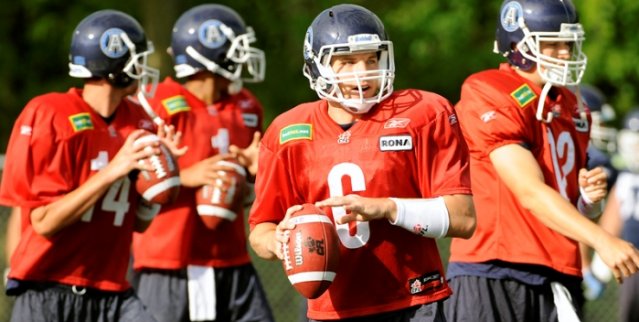 Mullin: Changing the game – The Ratio

What is a Canadian?

Better yet, what is a non-import?

One is a navel gazing question as old as confederation.

The other is a balancing act comprised of asterisks and italics.

Let’s try to answer a little from column ‘A’, and column ‘B’ to define just what a Canadian player is and what an import player is.

The simple definition is this:

A player who is a Canadian citizen and was physically resident in Canada for an aggregate period of five years prior to the age of 18 years qualifies as a non-import player.

He doesn’t have to be a Canadian citizen. According to that description, he doesn’t need to play in the Canadian football system. It doesn’t make any difference if you have one or both parents carrying Canadian passports. You just need to have lingered around long enough to qualify.

Before we dig much deeper than this a history lesson is required. Please excuse me if it reads like an academic dissertation, since the number of imports and the definition of a non-import in the CFL has undergone 32 significant changes since 1936. An offering of change requires context.

The rules on imports were wide open in the CFL’s formative years, until the Winnipeg ‘Pegs became the first western team to win the Grey Cup in 1935 with eight imports on the roster, led by the legendary Fritzie Hanson.

Residency requirements were established the following year, which led to the 1936 western champ Regina Roughriders declining their trip to the Grey Cup rather than play without five key imports.

Finally in 1946, the Canadian Rugby Union – the precursor to the CFL – allowed five imports. In 1950, the limit was raised to seven. In 1952 it was changed again to allow seven imports as well as allowing Americans with four years of experience to be counted as non-imports.

In 1954 – generally recognized as the start of the modern era of Canadian football – the quota was raised to 10 non-imports. In 1955 the four year rule was scrapped but western teams carried 12 Americans. By 1959 both the Eastern Big Four and the Western Interprovincial Rugby Football Union were up to 12 Americans on a roster of 27.

A landmark decision was made in 1961 with the ‘Naturalized Canadian’ rule, a.k.a., the ‘Canadianized American’. The rule granted non-import status to players who had acquired Canadian citizenship after five years of residency in the country. Essentially this meant that rosters were set at 34, with 15 imports.

Of course, teams started to take advantage of this rule, so in 1965 number of Naturalized Canadians on each roster was limited to three. However, one player who was released due to this new quota went marching off to the Ontario Human Rights Commission, which ruled that it was unlawful to discriminate employment based on citizenship, threatening all roster management.

Cue Bora Laskin, who was the Dean of Law at Osgoode Hall in Toronto, and later the Chief Justice of the Supreme Court of Canada. Laskin found a way out for the newly formed Canadian Football League. The solution was to base any distinction not on a player’s nationality, citizenship or residence but on his early football training.

If the training was received inside Canada, he was a “non-import”. Outside of Canada, he was an “import”. The definition has withstood challenges from the Canadian and Ontario Human Rights Commissions since 1965.

From there, through the 1970’s, the number of imports slowly crept upward. From 14 to 15 in 1972, to removing quarterbacks from the ratio mix in 1986 with the import number falling to 13, then edging its way upward to the present day of a roster ratios. Today teams are made up of 42 players, including three quarterbacks and 39 other players, of which 19 may be imports. Essentially this leaves teams with 22 imports total and only seven Canadian starters.

Understanding the background, the question is: Is it time to blow up this rule and review of what it takes to be a Canadian in the world of professional football on this side of the line?

The ‘Naturalized Canadian’ designation is not an option. That path was unfortunately washed out in 1965. It hardly seems fair, since it’s hard to think of Pinball Clemons, Angelo Mosca, or anyone else in the long line of Americans who migrated to the Home and Native as anything less than Canadian.

The common goal at hand is to make the game stronger at the professional and amateur level. If the player and participation rate increases there will be corresponding competition for jobs. For that, you have to go to a Made in Canada solution.

Across all four NCAA divisions there are in the neighbourhood of 12,600 seniors graduating into the football workforce. It’s a large pool to choose from and it doesn’t include undergraduates, or the turnover of NFL, UFL and AFL rosters.

In the CIS there are 26 teams which have done a credible job generating the backbone of talent for the CFL, and in more recent times have provided supplementary talent for the NFL.

And for those of you who have followed the league for decades, you are well aware that the Canadian player is the element that brings the continuity to the CFL that is the cornerstone of tradition.

So, how do we make the CIS system stronger, supply more non-import players to the CFL, and maintain and even grow the number of Canadians on a roster while the league expands to nine and possibly 10 teams?

1. Allow foreign players who have played four at least four years and graduated from a CIS program to count as non-imports.

In this case, it isn’t an American who comes to mind at first. It’s actually a Mexican running back by the name of Jeronimo Huerta-Flores who led the Laval Rouge et Or to the Vanier Cup.  He was well known to football fans in Quebec, and got a look from the Montreal Alouettes after graduation in 2004. If he was a non-import he would have been given the opportunity to develop into a starting position like an Andre Durie or Calvin McCarty.

The rookie-of-the-year in the CIS in 2010 was a true freshman by the name of Erik Dzwilewski, from Boise, Idaho who went 4-1 as quarterback of the Calgary Dinos.

Dzwilewski – who spent several seasons as a water boy for the Boise State Broncos – scrambles, can throw on the run and is perfectly tailored for the Canadian game.

There are foreign players throughout the CIS, who provide depth in the place where many Canadian kids would have been if they hadn’t left for the NCAA.

Canada is a country of immigrants and our campuses are filled with foreign students. Why would we not provide the opportunity to take what they’ve learned in our institutions and apply it to the work force in our country, while strengthening the caliber of the main feeder system of the game?

The hope for Canadian quarterbacks has to start somewhere.

Quality athletes at the amateur level who show pro potential are forced to ask themselves a question: ‘Do I want my career to end in my senior year at quarterback at university or do I want to be drafted as a receiver or defensive back?’

We know what the answer to that is. Five years from now, I hope that any aspiring QB on this side of the 49th never has to ask himself that question again.

CFL coaches and GMs will argue that there’s not enough quality Canadian QB’s to go around for eight teams. There would be more than enough talent for teams to make a decision on if it was developed over a five-year period with goal in mind.

Working from east to west, would the game not have benefited from Jean-Philippe Shoiry of Sherbrooke attending Montreal’s camp over the last few years? Marc Mueller of Regina and Laurence Nixon of the Saskatchewan Huskies could have gone to the Bombers and Riders camps from their third year on.

UBC’s Billy Greene is going into year four, and is right in the Lions back yard as a camp arm.

The secondary effect of having our best amateur QB’s exposed to pro speed in a camp is the impact it would have on the play in their respective conferences. That’s a level the CFL relies on for just about every other position in the game.

There has been much discussion of offering teams an extra designated import if they were to carry a non-import quarterback. In my opinion, there needs to be more Canadian and Canadian developed players for CFL fans to identify with, not fewer.

An incentive for a team to carry a non-import quarterback should be $60,000 worth of added cap space, not the sacrifice of another Canadian on the roster in the medium term.

In the long term, there should be a spot set aside for a non-import quarterback.

If it was good enough for NFL Europe to bring international players into their camps and onto their rosters for the development of the game in those regions, why is it not beneficial for the CFL to bring players from their own country into the mix in the most important position on the field?

The Canadian quarterback question is one of patriotic self-respect.

In recent years, the league has been chipping away at the role of the Canadian player. When a whiff of a rumour circulated before the 2009 Grey Cup that the number of non-imports may be reduced, the message from the public and media was loud, clear and heard by the league.

If the league were to make these changes to the non-import rules with these two simple measures, we would have a more competitive domestic university system. That would justify an increase of non-imports on CFL rosters. And, it would also give aspiring players a chance to shoot for excellence in key positions, rather than settle for a compromise.