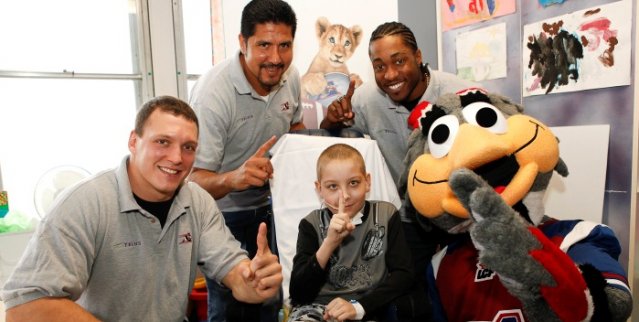 A very special afternoon was organized by the Alouettes and TELUS, featuring games, stories and the presence of their favourite players, who brought some sunshine into an otherwise dreary day for hospitalized children. The players took time to chat with the kids, sign autographs and take photos. To highlight this initiative, gift bags were also distributed.

“It’s really an honor for us to receive the Alouettes at Sainte-Justine,” said Isabelle Péan, Director, Major Gifts and Strategic Research of the Sainte-Justine UHC Foundation.

“Children are often hospitalized for long periods. This initiative not only breaks their isolation, but also provides them with magical moments in their daily routines. Thanks to Telus and the Alouettes for this wonderful initiative.”

The hospital visit was made possible through the support of TELUS, who took the opportunity to donate $10,000 to the CHU – Sainte-Justine Foundation. The donation will be used to support the Foundation’s mission of remaining on the cutting edge of technological innovation, contributing to research and education, and maintaining a high-quality and compassionate approach to health care.

“TELUS partnered with the Alouettes to bring some happiness to the kids in the hospital. This partnership is lined up with one of our deepest convictions, which is to contribute to the development of Quebec’s health system via not only our community involvement, but also through our technological innovations,” declared Kasra Moozar, Vice-President of Sales and Business Development at TELUS health solutions. “We hope this day at the CHUS with the Alouettes will make a difference for these kids.”

This was the fourth and final hospital visit within the Touch de Hearts tour, supported by TELUS, in 2011.