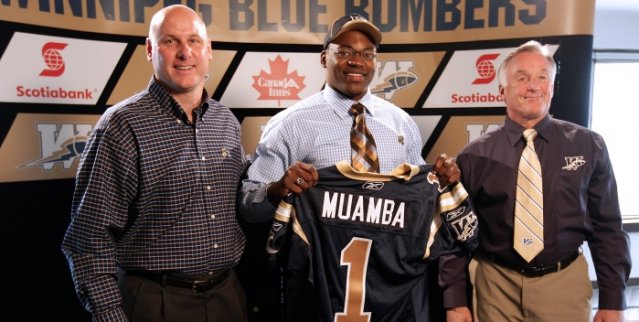 “I’m thrilled to get this deal completed, and officially become a Winnipeg Blue Bomber,” said Muamba.  “From the moment I was drafted earlier this month, the Blue Bomber organization has been great to me and my family, and I’m really excited to head to Winnipeg and compete for a roster spot in 2011.  I’m looking forward to getting to know my teammates; meeting all the fans and helping the Blue Bombers win a Grey Cup this season.”

The 6’0″, 230 lbs. Muamba was the President’s Trophy winner last season, which is given annually to the top defensive player in the CIS.

He leaves St. F-X as the school’s all-time leader in tackles with 149.5 and enjoyed a tremendous senior season which saw him finish second in the Atlantic University Sport Conference (AUS) and fourth in the country with 63.5 total tackles.

He also ranked in the top 10 in his conference with 11 tackles for losses and 3.5 sacks, while adding one interception, one forced fumble and one fumble recovery.

His performance earned him All-Canadian status for the third straight season, including first-team nominations two years running.  Muamba participated in the CIS East West Bowl and was also the AUS nominee for the President’s Trophy in 2008.

“We’re thrilled to get Henoc signed and a part of the Blue Bomber family,” said Vice-President and General Manager, Joe Mack. “He is someone who possesses tremendous talent and has all the tools necessary in order to be successful in this league.  He’s a great person, and we welcome him to the organization.”