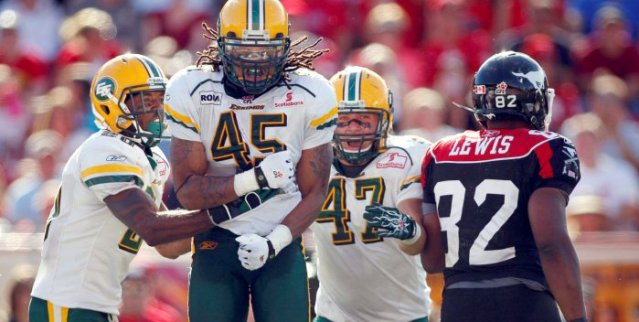 CALGARY — The Edmonton Eskimos ended a nasty losing streak by completely dismantling the hottest offence in the CFL.

The Eskimos made life miserable for Calgary quarterback Henry Burris while winning for the second time this season at McMahon Stadium. Burris was sacked three times and forced into committing four turnovers.

Edmonton vaulted into a tie with Calgary at 6-3 atop the CFL’s West Division, but rank higher because they’re 2-0 versus the Stamps this season. The two clubs meet again in their regular-season finale Friday in Edmonton.

Edmonton was coming off their bye week and ended a three-game losing streak with the win, while ending Calgary’s winning streak at four.

“When you’re not playing well and on a three-game skid, there’s not a lot to be happy about,” Edmonton quarterback Ricky Ray said.

“We’re playing the hottest team in the CFL in their place in a Labour Day game and to come out with a big victory, it’s big for us to get back moving in the right direction.”

Edmonton backup quarterback Kerry Joseph, Andrew Nowacki and Adarius Bowman scored touchdowns for the visitors in front of an announced sellout of 35,650 on a hot, sunny day at McMahon. The stadium began to empty at the start of the fourth quarter when it was apparent the hosts couldn’t catch Edmonton.

Edmonton had several starters out of their lineup due to injury during their skid. Two returned Monday and were impact players. Both linebacker Greg Peach (knee) and receiver Bowman (ribs) hadn’t played since July 23 when the Eskimos beat the Stamps 24-19 in Calgary.

Peach forced a fumble and recovered another that led to a pair of touchdowns for the visitors. Bowman scored a fourth-quarter touchdown and ran 44 yards run on a second-quarter gadget play that put Edmonton in scoring position.

“That’s why they’re starters in this league,” Ray said. “They make a lot of plays for us.”

Edmonton was still without leading receiver Fred Stamps, who suffered an abdominal injury Aug. 5 versus Winnipeg.

Edmonton also tightened up its offensive line. After giving up 18 sacks in their previous three games, the Stampeders recorded none on Ray.

Instead, it was Burris who was under pressure from an Edmonton defence that sacked him three times. After throwing for over 400 yards the previous week against Montreal and earning the CFL’s offensive player of the month for August, Burris had two fumbles and two interceptions that Edmonton converted into 24 points.

“It’s one of those situations where, my momma always said there would be days like these,” a frustrated Burris said. “They came down here and played like a ticked-off team and we went out there and we were on vacation all day.

“I’ve got to play better. I started pressing there towards the end when we weren’t getting some things done and got a couple of interceptions, but hey, it’s a long journey. There will be games like this throughout the season.”

Burris completed 13 of 23 passes for 132 yards and one touchdown. Backup Drew Tate replaced Burris midway through the fourth quarter and completed a pass on three attempts for 19 yards.

With better protection, Ray was 14-for-21 for 131 yards and two touchdowns. Joseph was 3-for-4 for 36 yards and third-stringer Eric Ward competed a pass for a yard.

Calgary didn’t help their cause with 130 yards in penalties to
Edmonton’s 62.

“Edmonton came down here a hungry football team and they took it to us,” Calgary head coach John Hufnagel said.

After opening the season 5-0, Edmonton lost their next three, including 27-4 and 36-1 losses to Montreal and B.C. Monday’s performance provided a much-needed boost to Edmonton’s confidence.

“It really sets us up for (next) weekend, but really, it sets us up for the year too,” Peach said. “Everyone talks about the second half is the real season. Those first eight games, we set ourselves up pretty well and now we’ve got the momentum to finish off.”

Hufnagel took Burris out of the game after a fourth-quarter interception by Chris Thompson. Damaso Munoz picked off a Burris pass late in the third quarter and Bowman scored on a 31-yard pass to make it 32-7 for the visitors.

“I took Henry out because of his last play,” Hufnagel said of the Thompson pick. “The plays before that wasn’t Henry’s fault. We need to protect the quarterback. He doesn’t have eyes in the back of his head.”

After Schiavone’s third field goal of the game, Marcus Howard hit Burris hard and Peach recovered the fumble. Nowacki scored on a seven-yard catch at 11:53.

Edmonton returner Jason Armstead caught Calgary’s punt coverage flat-footed with a lateral pass to Bowman on the sidelines. Bowman ran the ball into Calgary territory, but the Eskimos settled for a field goal.

Calgary coughed up the ball on their own 16-yard line in the second quarter. Joseph drilled the ball through Calgary’s line for one-yard touchdown at 10:01 to give the visitors a 10-7 lead. Peach had knocked the ball loose from Burris on the run and T.J. Hill recovered it.

Burris marched the Stamps 99 yards and finished with a seven-yard touchdown pass to Lewis with 18 seconds remaining in the first quarter.

Notes: The Stampeders have added import receiver Marquay McDaniel to their practice roster . . . Calgary is 3-2 versus Edmonton in their last five Labour Day games and 5-5 in their last 10 . . . Lewis extended his run of consecutive games with at least one catch to 131.