Landry: How the Argos acquired the Rocket 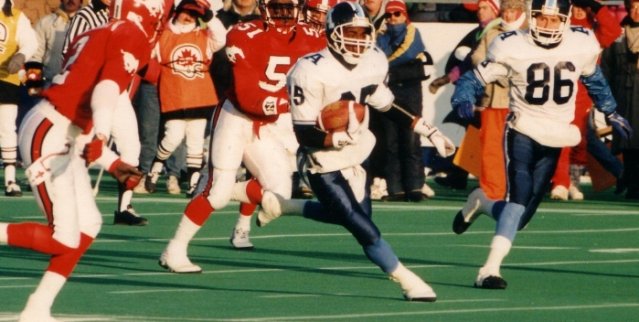 Landry: How the Argos acquired the Rocket

It was the biggest news in the world of sports that year. An incredible coup, an unlikely marriage, an impossible dream.

When Raghib “Rocket” Ismail touched down in Toronto in 1991, it may have been money that played the most major of roles in the jaw-dropping deal, but it was former General Manager Mike McCarthy’s connections and fancy front office footwork that got it all rolling in the first place, and kept it rolling towards Ismail’s fabled launching with the Argonauts.

Now a scout with the Montreal Alouettes, McCarthy has long been known for his extensive football network, one that he fostered as he traveled his way through the NCAA, USFL, AFL, NFL and CFL over the course of his 35 years as a football executive.

Not one to shy away from big moves (he traded six starters to the B.C. Lions for quarterback Matt Dunigan prior to the 1990 season), McCarthy was ready when new owner Bruce McNall, along with co-owners John Candy and Wayne Gretzky, told him to “think big.”

Even before they’d hit the scene, he remembers pipe dreaming about the speedster from Notre Dame. A month before McNall, Candy and Gretzky bought the team, McCarthy watched Ismail perform in the Orange Bowl.

“I said to by wife Robyn: wouldn’t it be great to have a guy like that, if it was possible?”

Just a few months later, the smoke cleared and the dream was reality.

Although the deal to purchase the Argos was made official on February 25th, 1991, as McCarthy remembers it, the agreement was made in principle on Valentine’s day.

It was shortly thereafter that McCarthy was instructed to do that “big thinking.” By March, he was ready with a plan. That’s when he called McNall Sports and Entertainment Vice President, Roy Mlakar, and dropped the Ismail bomb.

“I said, even if we don’t sign the guy, we’re gonna get a lot of publicity. Rocket’s predicted to be the first pick in the NFL draft, which would be huge, media wise.

“I know people at Notre Dame. My lawyer and agent is a Chicago guy, but he’s a big-time Notre Dame alumni guy. We can get inside and talk to this kid and see if there’s an interest from him in playing in Canada.”

McCarthy then waited to see if he’d get the go ahead to start tapping his connections. He didn’t have to wait long. But, he didn’t hear it directly from Mlakar, McNall, Candy, Gretzky, or anyone else with the organization.

Instead, like hundreds of thousands of others, he got the news while watching Hockey Night in Canada.

“The L.A. Kings are in Edmonton and they’re interviewing Bruce McNall. Out of the blue he says something like ‘I was talking with my general manager and we’re gonna pursue Rocket Ismail, who’s projected to be the number one pick in the NFL draft….’

“All of a sudden all hell breaks loose. My phone rings off the hook ’til three in the morning, from the West coast to the East. It was like a wildfire spreading across North America.”

“And we hadn’t even had a conversation with the guy yet,” said McCarthy laughing robustly at the memory.

That same night, McCarthy placed a call to Ray Newman, the point man heading up a battery of Ismail lawyers, agents and advisors known as “Team Rocket.”

Funny thing about all of that is that McNall had set the wheels in motion, without even knowing how costly it might be to sign Rocket Ismail. But he’d already illustrated a “money is no object” sensibility less than three years previous, when he made the biggest deal in hockey history, landing Gretzky for the Los Angeles Kings.

McCarthy gave his owner a financial breakdown of what Dallas quarterback Troy Aikman made as the number one pick in the 1989 draft, as well as the contract numbers for the top five picks in the 1990 draft. He then informed McNall on how the contract would have to be structured.

“To sign this guy, he would have to sign a standard CFL contract, for any number we want… I’d just put a low number on the player contract and the personal services contract through McNall Sports And Entertainment and Candy and Gretzky – however they’d want to set that up – would be guaranteed. I told him this is the only way we’re gonna get this guy.”

There was more to the deal, however, than money. Ismail could have been a very, very rich young man had he stayed the course and opted to be selected first overall by the Dallas Cowboys. Maybe not quite as rich, but rich nonetheless.

That’s where McCarthy’s recruiting sensibilities and connections came in. With help from some of the Argo players, the courtship of Raghib Ismail was about to become something even Leo Cahill would have been proud of.

While McNall’s California money people were working on an offer that would be difficult to refuse, and one that would ultimately see the New England Patriots deal the rights to the first overall pick to the Cowboys (“We scared the Patriots”), McCarthy set out to lure Ismail north by making him feel loved.

The Rocket was getting news about his Argo possibilities in his South Bend locker, almost every day. In an era just prior to widespread internet access, some extra work was necessary to get the job done.

“A trainer who’d worked with me many years before at another university was my inside guy,” said McCarthy. “We were putting newspaper clippings…
anything we could. I said just put it in his locker and just leave it there.

“So, there’s articles from the Boston Globe, all the newspapers in Canada… I’m Fed Exing them down there to Notre Dame so he knows what’s going on up here.”

It paid off. In his first telephone conversation with McCarthy, Ismail apparently let him know that he was a little taken aback by all the excitement, all the stories being generated by the possibility of him heading to the CFL. Time to make the next move: get the Rocket to visit Toronto.

“I told him…We gotta get you up here. You’ve gotta see this place. You gotta see SkyDome. You gotta go out and see what’s here. This is Europe in North America. This is Paris, this is London, this is New York City all in one nice little package.”

But then there were the inevitable scheduling problems. Ismail was involved in running track and had training and meet obligations. But, finally, he called McCarthy and told him he was ready to come up for a look.

Ismail spent four days in Toronto, touring the city with future teammates Pinball Clemons, Matt Dunigan, Harold Hallman and Darrell K. Smith. McCarthy kept an arm’s length relationship at that point, and to this day doesn’t really know all the details of the visit.

And that was the next step in the process. “We got mom on our side,” said McCarthy.

Fatma Ismail accompanied her son on his next visit to Toronto. McCarthy wanted her on side because not only did the Argos plan to land Rocket, they wanted to sign his little brother Qadry. “The missile,” as he was known, was playing football at the University of Syracuse.

“I remember she was really warm and gregarious, loving and hugging. Just a great gal. And Rocket had such a great time. He felt that the black-white issues weren’t here, because of Canada’s multiculturalism. I think his mother saw that. They felt so much at home and very comfortable here.”

It was at that juncture that a deal appeared to be very close. However, as mentioned, the New England Patriots had peddled their first overall pick to the Dallas Cowboys. The Argos wanted Ismail to sign his contract on the day of or the eve of the NFL draft. “To get the big splash,” said McCarthy.

However, “Team Rocket” felt compelled to see
what the Cowboys might have to offer, before making a final decision. McCarthy heard the Cowboys didn’t like the asking price.

“They (Team Rocket) put a number on the table. I heard it was 16 million dollars, and Jerry (Cowboys’ owner Jerry Jones) said ‘that’s too much.’ That’s when Team Rocket got on the plane and went to L.A.”

The visits over, the negotiating complete, the competition cast aside, Raghib “Rocket” Ismail was formally introduced as a member of the Toronto Argonauts on April 20th, 1991. McCarthy then had to ensure that all the players not nicknamed “Rocket” would be on board with a teammate who made more money than the rest of them combined.

“I said you’re all gonna get something out of this, guys. You’re all gonna have the time of your life. This is never gonna happen again. Never again will you be a part of something like this.”

What if Ismail had declined the Argos’ offer?

McCarthy says they were prepared to go after another high profile college star. He told McNall: “If this guy doesn’t bite, here’s two more names.”

McCarthy declined to give names, but did say that they were already set at quarterback and wanted either a receiver or running back. When you look at the 1991 NFL draft, you see that he’d have passed on quarterbacks (in descending draft order) Dan McGwire, Todd Marinovich and Brett Favre.