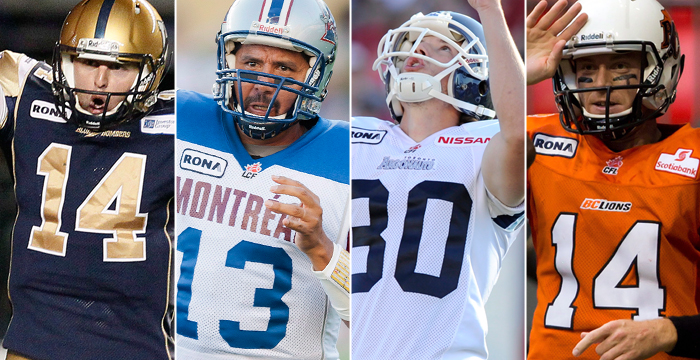 There is no other league in professional sports where in one week you can see every team in the league play. Now, sure, that may be because the CFL is the smallest of all the major leagues, but that brings us back to what makes the CFL the CFL.

The rules, the field, the ball, the fans, everything about the Canadian Football League make being a fan of truly special. If you are a die-hard fan, you more-than-likely have a bucket list. Be it attending 25 Grey Cup games, attending a game in every city, or even seeing your favourite team play on the road. Part of my CFL bucket list was crossed off this past week when I had the fortune of attending all four games played.

While the four games were played in four days, my week started out a couple of days earlier. I arrived in Winnipeg early Tuesday morning, and attended the Blue Bombers’ team practice that morning. After checking out parts of the city for the remainder of the day, the process was repeated on Wednesday by visiting the Bombers team walkthrough.

Thursday was game day in Winnipeg.

The Bombers hosted the Hamilton Tiger-Cats for the first of three meetings this season. I had been looking forward to this game for quite some time since booking the trip, not only because of the developing rivalry that is Winnipeg vs. Hamilton, but also because of the fans. Canad Inns Stadium has grown a reputation of having arguably the loudest crowd in the CFL. Naturally, I was eager to see how they would affect the game.

It wasn’t a thrilling start for the home-town team. The Tiger-Cats controlled the pace for the first half and took a 14-7 lead into the break. Despite the fact that Hamilton was so dominant in the first two quarters, it seemed like the half was essentially a win for Winnipeg, despite the fact that they trailed by seven points.

That observation came true in the third quarter, as the Bombers got their first touchdown of the game on a Chad Simpson carry, and the two teams entered the fourth quarter tied at 17. The Bombers rode that momentum into the final frame when they grabbed the lead for the first time on a Chris Matthews touchdown. Chants of “Joey, Joey, Joey,” rang down from the stands as the Bomber faithful were pleased to see their offence have success under quarterback Joey Elliott.

After a back and forth quarter, the Bombers held off Hamilton in the final minute of the game and sent their fans home happy with their second win of the season.

The Winnipeg fans played their part in the game, and lived up to the expectations that they have placed over the past couple of seasons. It turned out to be the best of the four games played in the week, and that was aided by the atmosphere at Canad Inns Stadium.

On Friday, it was off to Edmonton to see the Montreal Alouettes battle the Eskimos on Friday night. I was already excited to see the game, not only because it was Friday night and Anthony Calvillo was in town against a tough Esks D, but also because of Commonwealth Stadium.

My first trip to the stadium was at the 2010 Grey Cup, and I adored it instantly. The set-up inside the stadium allows you to pick a spot from any seat and any row and still have a great line of sight towards the action on the field.

While I was looking forward to seeing the Bomber fans in action, truthfully, I was curious to see the atmosphere in all four stadiums where the games were being played. It is always interesting to attend other games and see how the fans react to the play on the field.

For this game, it wasn’t exactly pretty.

The Esks got behind early and trailed the Alouettes 28-0. While the game did eventually even out to a 38-25 loss, it really wasn’t close at any point. Of course, that didn’t please the fans and you could hear their displeasure through boos and clamours for back-ups to enter the game.

Seeing Calvillo play the game of football in person is truly a great experience. Sure, you can get a good view of his play while watching on television, but that doesn’t give you the full story. You get to see the way he handles himself on the field, on the bench, the way he controls the play, the offence, everything. There’s a reason why Calvillo is one of the greatest players to ever set foot on Canadian Football turf, and it shows itself during the game.

This was my ninth time seeing Calvillo live, and I definitely hope it was not my last.

With the first two games in the book and the journey halfway over, the shortest part of the trip came next; a quick sprint down the QE2 to Calgary came on Saturday as Ricky Ray returned to McMahon Stadium.

This time, of course, in the Argos double blue.

It was also the first game for the Argonauts following the big news earlier in the week where the team released its starting running back Cory Boyd. The move was of course talked about all across Canada and in every CFL city.

The biggest beneficiary of the Boyd news was new starting running back Chad Kackert. And for at least the first game, so to were the Toronto Argonauts. Kackert compiled 135 yards from scrimmage in the game, and huge plays in the passing game from Jeff Johnson, Chad Owens, Jason Barnes, Dontrelle Inman and Andre Durie paved the way for the Argos 22-14 win over the Stampeders.

For the most part, the game was a battle between the two placekickers and defensive teams as Swayze Waters and Rene Paredes combined for seven field goals in the game. The Argos got their first and only touchdown in the third quarter, while the Stampeders only major came late in the game.

With the game not overly thrilling, I spent some time watching the Stampeders all-star mascot Ralph the Dog. Ralph can definitely throw his name into the “Best Mascot” category.

With the trip heading to the fourth quarter (so to speak), a short 70 minute flight took me from Calgary to Vancouver International Airport. The Saskatchewan Roughriders were in town looking to erase their current three game losing streak. I was met at the airport by Jay Mayede (Follow him on Twitter @ThePrawnGuy), who I have come to know from the past two Grey Cups in Edmonton and Vancouver. Jay is a great Lions fan who took time out of his day to help me out with transportation and bring me to the grandest of all events on the trip.

I am of course referring to Tailgate Empire. The groundwork on this Lions home game event was put forward by Brian Wawryshyn. Chances are you already know him; Brian is one of the best and friendliest people I know, in addition to being a top fan of the Canadian Football League and the BC Lions. If you don’t know Brian, check him out at BCLionsDen.ca or on Twitter @BCLionsDen.

The tailgate itself was spectacular. The parking lot was full of fans and their grills, cooking up some pre-game meals and indulging in some beverages. If you plan on attending a Lio
ns game in Vancouver, I definitely would recommend you check these folks out at the corner of Quebec Street and Terminal Avenue.

As for the game itself, my first experience at BC Place Stadium was at the 2011 Grey Cup, nine months prior to my most recent visit. Of course at that time, the renovations done to the stadium were fairly fresh, and I was amazed by the massive video board, as well as the new roof. On Sunday, the roof was open, and the stadium was just as charming as I remembered from November. In addition to Tailgate Empire, I recommend you check out BC Place at some point as well.

The clock struck midnight on my trip at about 7:30 PM Pacific Time after the Lions had defeated the Riders 24-5. A moment of sadness set in, knowing that the journey was over far too quickly, but I also had a chance to reflect on what a great ride it was. I completed something that few had done before, and not many will do in the future.

For more from Tyler, please visit his CFL Daily blog, and follow him @CFLDaily.