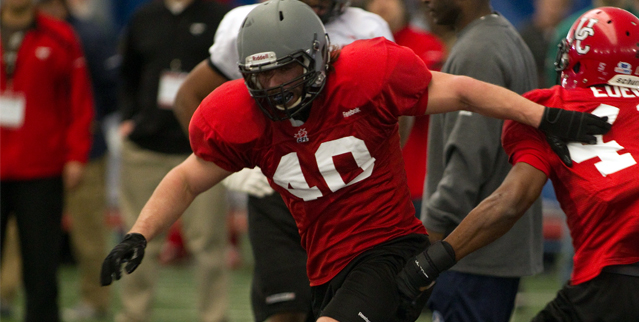 MONTREAL — The Alouettes went local last Monday, drafting four Quebec-born players out of the nine selected in the seven rounds of the 2013 CFL Canadian Draft as Steven Lumbala, Jesse Joseph, Nicolas Boulay and Simon Légaré were all drafted by their hometown team.

“We broke this draft down in three parts”, explained Alouettes General Manager Jim Popp. “In the first round, we drafted players that have a real chance of changing our ratio. In the middle of the draft, we drafted for the future. These are players we might see in a year or two. At the back of the draft, we took players at positions that we need to develop for the future and this also allowed us to draft two local guys who fit that mould.”

The Alouettes full 2013 CFL Canadian Draft class is as follows:

Edem (6’1”, 200 lbs.) led the CIS Canada West conference with 55 tackles while also adding four sacks and an interception in 2012. The Brampton, ON native helped anchor a Calgary Dinos’ defence that topped the Canada West conference in every category on his way to being named the Canada West defensive player of the year in 2012. Edem returns to Montreal having previously played the 2009 CIS season for the McGill University Redmen as well as one season collegiately at Champlain Regional College in Lennoxville.

Popp’s take: “He’s a great athlete and he will compete at the weak side linebacker position or as a free safety.”

Lumbala (5′,11″, 220 lbs.), was named a Canada West All-Star at running back for the second-straight year, seeing action in nine games last season and recording 993 combined rushing yards with eight touchdowns on 124 carries in combined regular season and postseason play. The versatile tailback also added 148 receiving yards and a major on just 16 receptions. The former standout from the University of Calgary amassed a career-best 251 rushing yards on 22 carries in a 38-14 win over Regina in the Hardy Cup on November 10, 2012.

Popp’s take: “He’s a great running back for our system. He’s a tremendous blocker and gives us the flexibility to change the ratio at that position.”

Shahin (6’3”, 290 lbs.), a defensive lineman out of Rice University, finished last season with a career-best 45 tackles and six sacks. The three-year veteran with the Owls suited-up for 34 games between 2010 and 2012 recording 71 tackles in the NCAA FBS (Division I).

Joseph (6’3″, 262 lbs.) played 37 games in four seasons with the University of Connecticut Huskies, recording 118 tackles and 13 sacks. His most dominant performance came against North Carolina on September 12, 2009 where he picked-up eight tackles in a single game.

Popp’s take: “He’s also a pick for the future. He’s recovering from injury and we look forward to seeing his progress at the collegiate level in 2013.”

Boulay (6’0”, 220 lbs.), a Magog, QC native emerged as the leader of the Sherbrooke Vert et Or linebacking corps in 2012, coming off his best season in the CIS, finishing fourth in the Quebec conference and sixth in the country for tackles with 58.5. Boulay also recorded two quarterback sacks in his nine games played last season.

Popp’s take: “We were able to provide a local guy with a dream come true. He will have every chance to compete for a special teams’ job in his first year.”

Klassen (6’5″, 275 lbs.), a defensive lineman, was the third Calgary Dino the Alouettes drafted on Monday. He led the team with 5.5 sacks last season and picked up his first career interception Week 3 against the University of Manitoba. The Calgary native recorded at least one defensive tackle in every regular season game in 2012.

Popp’s take: “He’s a player on the rise and has improved greatly last season. He’s a got a big frame and has the flexibility to play on the end as well as inside.”

Piotrowski (6’4″, 295 lbs.), showcased his versatility on the offensive line during his time spent with the University of Guelph Gryphons. The Shanty Bay, ON native started the 2010 and 2011 seasons at two different positions – right guard and left tackle respectively.

Légaré (6’4″, 275 lbs.) helped the Carabins finish the 2012 season with an 8-1 record and was a fixture on an offensive line which ranked second in the Quebec conference for points per game with 33.2. The 23-year-old Montreal native was named to the Quebec All-Star team in 2010. He played his Cegep AAA football with Cégep du Vieux Montréal and high school football with Collège Notre-Dame.

Popp’s take: “We are making a young man’s wish come true as he’s been drafted by his hometown team. We love the progress he continues to make at Montreal. He is a player on the rise.”

Damone Blackman (5’11”, 170 lbs.), an Oshawa, ON native, converted from defensive back to receiver with the Saint Mary Huskies in the CIS. He was invited to the Quebec City Regional Combine last March where he was able to show off his abilities.

Popp’s take: “He’s a great athlete who was moved from defensive back to wide receiver. He’s probably the fastest guy in the draft as he has world class speed.”

Last Monday’s draft was the first since 1999 in which the Alouettes held two picks in the first round. That year, General Manager Jim Popp selected receiver Sylvain Girard (5th overall) and cornerback Davis Sanchez (6th overall).