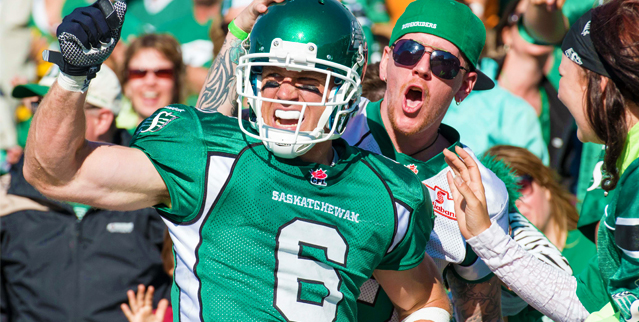 REGINA — If his sprained foot bothered him at all, Roughriders QB Darian Durant refused to show it in the slightest bit.

The 30-year old pivot was exceptional, completing 20 passes for 347 yards and 4 touchdowns, two to receiver Rob Bagg as the Roughriders beat the visiting Hamilton Tiger-Cats 37-0 on Sunday night.

Kory Sheets was also solid, rushing for 130 yards, eclipsing the 100-yard rushing mark for the fourth straight game in the process. Bagg, meanwhile, finished with 5 catches for 152 yards in addition to his pair of scores.

The win marked the first Roughriders shutout since they beat the Blue Bombers 52-0 on Labour Day of last season.

Tonight’s tilt had all the makings of being an offensive shootout, but it took some time for both units to gather their bearings.

In fact, it wasn’t until the final minute of the opening quarter when the Riders began to establish themselves offensively.

Sheets, who has been red-hot through three games this season, ran the ball seven times for 32 yards through the first frame and kick-started the Riders on their first scoring drive of the game, running the ball 11 yards to the outside for a  fresh set of downs.

From there, Saskatchewan’s offence moved downfield with a nice mix of runs and completions, one of which turned out to be Geroy Simon’s first as a Roughrider.

However, Durant wasn’t able to find the endzone, forcing the Riders to settle for a field goal, a 13-yard chip shot for Chris Milo.

On Hamilton’s ensuing possession, they seemed primed to reply with points of their own, as Burris quickly pushed his offence closer to Rider territory with apparent ease.

Heading into Week 4, the Riders defence had allowed a league-high 1,042 passing yards but countered that stat by registering the most interceptions with four.

True to form, when it looked like they were being victimized through the air, safety Craig Butler picked off Burris in the endzone, squashing the drive and any momentum it may have given the Ticats in the process.

Saskatchewan took advantage of the turnover, as Milo connected on his second field goal of the game, this time splitting the uprights from 47 yards out.

After a quick two-and-out by the Ticats, one that saw them hand the ball to running back Chevon Walker for the first time of the half, Durant and the Riders’ offence went to work on extending their lead.

First, Durant hooked up with two of his most reliable targets, as Taj Smith and Weston Dressler caught passes for gains of 32 and 12 yards respectively.

With a fresh set of downs, Durant then looked to Bagg, who hauled in a 28-yard pass in the endzone for his second touchdown in as many weeks.

The Riders would tack on three more points as the half expired, increasing their lead to 16-0 at the break.

The first half saw Durant complete 13 of his 23 passes for 187 yards and a touchdown, while Burris was solid as well, completing 11 of 17 attempts for 117 yards.

On the ground, Sheets ran for 36 yards on nine carries, while Walker had just one carry for five yards.

Until the later stages of the third quarter, there was little action to report offensively.

With less than three minutes to go in the frame, Durant took advantage of a costly pass interference penalty by Hamilton’s Rico Murray, one that negated what would have been the first interception thrown by the pivot this season.

But Durant quickly forgot about his slight miscue, as he proceeded to find Simon for a gain of 32 yards and followed that up immediately with a 12-yard strike to Dressler.

One play later, Durant hooked up with 310-pound guard Dan Clark for the big man’s first CFL touchdown, increasing their lead to 23-0.

But the Riders weren’t done just yet.

Following another quick two-and-out by the Ticats, Durant needed just one play to find the endzone again, this time finding Bagg for his second major of the game.

From there, the Riders offence never looked back, as Durant followed up four-straight carries by Sheets by finding Dressler wide open in the endzone for a 28-yard touchdown, increasing their lead to 37.

In the win, Simon hauled in just to passes for 38 yards. It was his first taste of action since last year’s Western Final, as he missed the first three games of the season with a hamstring injury.

On the defensive side of the ball, the Riders were simply unstoppable. With Rey Williams’ two sacks and three tackles leading the way, the Riders’ D played to arguably their most complete effort of the young season.

Next week, the Ticats will get their shot at revenge, as the two teams will square off once again at Alumni Stadium in Guelph.