First step: Top talent to be on display at 2014 Combines 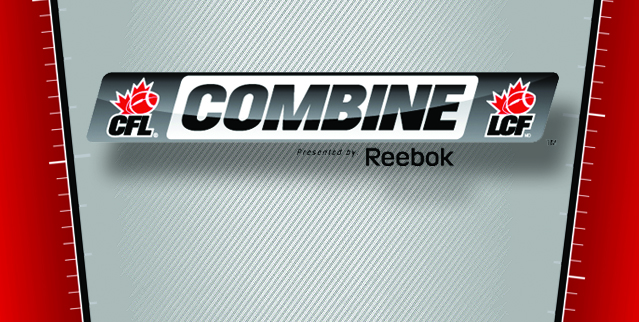 First step: Top talent to be on display at 2014 Combines

The national CFL Combine presented by Reebok will take place in Toronto from March 21-23.

“Last year we introduced the concept of regional combines with the objective of providing more players opportunities to work out in front of scouts and coaches from all teams and the results and feedback were very positive,” said Kevin McDonald, CFL vice president of football operations.

The CFL also announced that it has adjusted the invitation process for players.

The top 40 players eligible for the upcoming CFL Draft on May 13, as ranked collectively by the teams and the league office, are invited to attend the national CFL Combine presented by Reebok.

The CFL, with input from all teams, will then invite additional players from the regional combines depending on player performance.

There is no minimum or maximum number of players required to be invited to the national combine from the regional combines. But the expectation is that approximately 6-12 players will be extended an invite.

About the Regional Combines:

The one-day invitational combines are for players eligible for the 2014 CFL Draft. The top players from each combine could receive an invite to attend the national CFL Combine in Toronto from March 21 to March 23. The regional combines may also include non-import free agents and import free agents who play in the CIS. These players are not eligible for the draft and therefore cannot receive an invitation to the national CFL Combine. Each regional combine will invite approximately 30 to 40 football players. See below for the list of participants:

About the National CFL Combine:

The national CFL Combine presented by Reebok in Toronto will take place at the Park Hyatt Hotel and Varsity Stadium. The players will undergo medical examinations, performance, strength and speed tests, on-field football drills and team interviews over the three day combine in front of general managers, coaches and scouts from all teams. Here is the list of players attending this year’s combine:

Specific details, including timing, location and media opportunities for each event will be distributed over the coming days.

Regional Combine Players Invited to National Combine in 2013:
Jermaine Gabriel, a defensive back from the CJFL’s Calgary Colts, who also spent two years at Bishop’s University (Edmonton Regional Combine). Selected by the Toronto Argonauts in the second round, 17th overall, in the 2013 CFL Draft.

Michael Klassen, a defensive lineman from the University of Calgary (Edmonton Regional Combine). Seclted by the Montreal Alouettes in fourth round, 32nd overall, in the 2013 CFL Draft.

Kristopher Robertson, a defensive back from Concordia University (Quebec City Regional Combine). Selected by the Winnipeg Blue Bombers in the second round, 11th overall, in the 2013 CFL Draft.