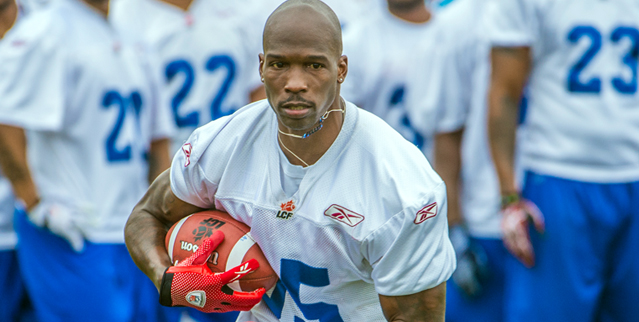 MONTREAL — The Montreal Alouettes announced on Thursday that they have signed veteran receiver Chad Johnson.

Johnson joins the Alouettes after spending 11 seasons in the NFL, including the first ten with the Cincinnati Bengals. The elite receiver amassed 11,059 receiving yards, which ranks him 30th on the NFL all-time list. He also caught 766 passes while scoring 67 receiving touchdowns. He averaged 14.4 yards per catch in his 166 career games played South of the border.

“Chad Johnson did an outstanding job the last three days. As we added him into the mix, it was to see how he communicated with the players, how he held himself, the way he physically held up, his true interest in coming to the CFL,” said Jim Popp.

“It was a total evaluation so that it’s a good fit. He was very happy and very excited to be on the field again and we are happy to welcome him to the Alouettes,” added Popp.

Johnson cracked 1,000 receiving yards with Cincinnati in seven out of eight seasons from 2002 through 2009. He also snagged eight or more touchdown receptions in five separate occasions during his tenure with the Bengals.

Drafted in the second round (36th overall) by Cincinnati from Oregon State University, the Miami, Florida native reached the Pro Bowl five straight years from 2003-2007 and again in 2009 with the Bengals.

The now 36-year-old last played in 2011 with New England, where he made 15 catches for 276 yards and a touchdown. He caught one pass in Super Bowl XLVI for 21 yards as New England lost 21-17 to the New York Giants. Most recently he took part in the Miami Dolphins training camp in 2012.