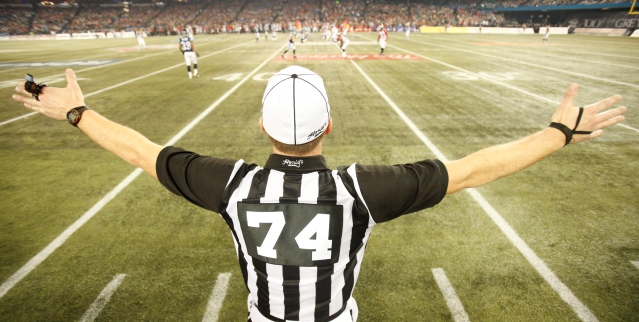 TORONTO — Today is an historic day in the world of football as the Canadian Football League announced that its Board of Governors has approved making pass interference subject to video review.

“We are constantly looking for ways to make our great game even better and I believe we have done that today with the approval of this rule change,” said CFL Commissioner Mark Cohon. “Being progressive and using technology to compliment the excellent work our officials already do on the field is positive for our teams, players, and ultimately, our fans.”

The Board of Governors also approved all other rule changes that were proposed by the Rules Committee. All rule changes will be implemented for the 2014 season and are listed below.

“We are very much looking forward to implementing the rule changes for the 2014 season now that we have received final approval from our Board,” said Glen Johnson, CFL Vice President of Officiating. “We went through a very rigorous and inclusive process this off-season and we strongly believe that all of these rule changes will have a positive impact on our game.”

The CFL is the first football league to subject pass interference to video review.

The role of the Command Centre has also been expanded to automatically review specific turnovers of fumbles lost and interceptions, and can now detect illegal participation fouls during a play (when a player returns to the field after voluntarily leaving it).

Approved rule changes to further protect the health and safety of CFL players:

•    Eliminating low blocks below the waist, other than those delivered to the front plane of a player, in all areas of the field except in the area between the tackles and two yards on either side of the line of scrimmage.

•    Outlawing peel back blocks, which occur when a play changes direction in the backfield, forcing the defender to modify his pursuit, making him susceptible to blind low blocks executed by an offensive player moving toward his own end zone.

•    Clarifying the rules that make it illegal to “deliver a blow” to an opponent’s neck or head, and when it is illegal for a player to use their helmet to hit an opponent, standards already followed by officials but not yet codified in the rule book.

Other approved changes to promote scoring and improve the flow of the game:

•    Allowing quarterbacks for each team to use their own team supplied Wilson footballs, provided they have met the “new ball” quality standard established by the league.

•    Allowing centres to bob their heads multiple times in an effort to signal timing of the snap of the ball (to be used by visiting teams coping with noise in stadium).

•    Allowing offences to further dictate the pace of play by no longer requiring the Head Referee to hold the 20 second clock for the defence to substitute.