Pedersen: Elberg the one that got away 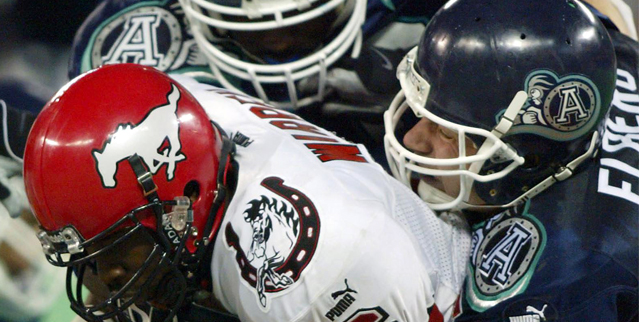 Pedersen: Elberg the one that got away

It’s always fun during Draft time in the CFL to browse the selections of the Saskatchewan Roughriders over the years. It’s all right there in the club’s media guide and there’s one name that jumps off the page.

Regina born and raised Brad Elberg was the Riders’ first round selection, #2 overall, in the 1993 CFL Draft. The product of the Thom Trojans and Queen’s Golden Gaels was coming home even though they weren’t quite yet Canada’s Team.

Every time Draft day rolls around, it brings up memories for Elberg.

“It sure does,” Elberg reflected on 620 CKRM’s SportsCage. “It was a wonderful day and it was really exciting to get drafted by the Riders. It’s not just draft day that brings back some good memories though. It was all of draft week and the things that led up to it.”

“It was 21 years ago and that was in the era where if there were some consensus first round picks, the CFL actually brought them into the draft city. In ’93 it was in Calgary so I was there hanging out with Patrick Burke and Mike O’Shea and some of the other first rounders.”

But a funny thing happened on the road to a happy marriage. After participating in camp and playing in two pre-season games, Elberg was inexplicably cut by the Riders’ braintrust of coach Don Mathews and GM Alan Ford. So Elberg became the answer to an odd trivia question; which Regina native was a first-round pick by the Riders but never played a game for the club?

“I’m not sure I like being the answer to that, but it’s accurate!” Elberg laughed. “It was the circumstances at the time. There was a period where it upset me a lot more then than it does now. What upsets me now is I never had an opportunity to play in that environment. Living and working in Toronto now, Regina will always be home. Regina and Saskatchewan is such a special place.

“What disappoints me now is I never got a chance to be a hometown guy who grew up a really enthusiastic CFL fan and get to play for the hometown team. When I look back now I don’t have sour grapes at all.”

“I was a tailback but I was asked to come into training camp and be a fullback. It’s a quantum leap to go from college to the CFL in the first place, never mind trying to do it at a position you haven’t played before. The rosters were only 37 players and the coaching staff made the decision I wasn’t one of their best 37. They seemed to do just fine without me and I’d like to think that I did okay playing nine years elsewhere.”

Elberg went on to flourish as a defensive back and special teams ace with the Winnipeg Blue Bombers, Toronto Argonauts and Hamilton Tiger-Cats in the 90’s and into the next decade.

However all good things must come to an end and for Elberg it came 12 years ago in Toronto. When he took the field for the last time, Elberg knew it would be his final game in the CFL.

“I did. At that time I was just finishing my law degree and I got offered the job I wanted and it was a fork in the road. I knew I had to make a decision between the CFL and starting my law career and I knew it was time. We made it to the Eastern Final that year and played before 57,000 at Skydome where Anthony Calvillo marched the Alouettes down for a touchdown late. It was funny, I was fortunate to play for some good teams and win a lot of games. But I remember how it felt to lose that game and walk off the field. The great thing about football is you always get to redeem yourself but 12 years later, that loss still stings.”

To update Rider fans, Elberg is now living and working in Toronto, but manages to get back to the Queen City regularly.

“I’ve been a lawyer since 2002 and I’m at a firm called Miller-Thompson. I’m a partner here and I get to practice out of the Regina and Toronto offices, so I’m home about once a month. It’s the only national firm with offices in Regina and that means a great deal to me.”

In life everything happens for a reason but it’s too bad Brad has to live with the gnawing regret of never running out of the tunnel at home at Taylor Field. It’s sad his family, friends and fans were denied that opportunity as well.