CFL Replay: A look back at Week 20 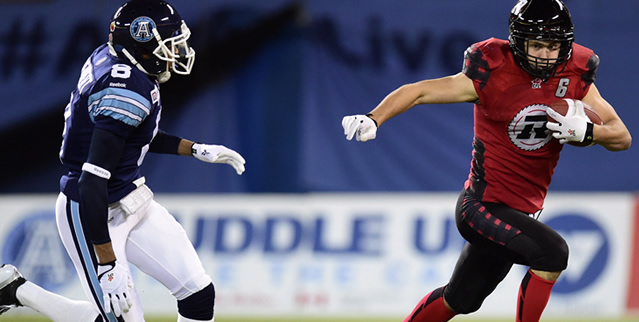 CFL Replay: A look back at Week 20

TORONTO — The 2014 CFL season is officially in the books after a wild finish in Week 20. Miss anything over the weekend? Don’t worry, CFL.ca’s Replay has got you covered.

In a must win for the Argos, the team did not disappoint the home side crowd on fan appreciation night, as the Argos won 23-5 to keep their playoff hopes alive.

Trevor Harris made his first career start for the injured Ricky Ray, and it was a memorable one as he filled in admirably.

Harris threw for 282 yards on 26-for-36 passing and two touchdowns in the winning effort.

In a game that meant little for the Calgary Stampeders, the league’s top team was all business, as they stormed into BC Place and defeated the hometown Lions 33-16 in the final game of game of the regular season for both teams.

Even though Drew Tate started the game, Bo Levi Mitchell came in the second quarter, but both Calgary pivots were effective.

Mitchell finished the game with 208 yards passing on 13-of-18 passing and threw a touchdown, while Tate passed for 206 yards and threw for a major.

Marquay McDaniel had success with both pivots as he compiled 165 yards on twelve receptions.

The Hamilton Tiger-Cats earned their first division title since 1998, after outlasting the Montreal Alouettes for a 29-15 victory on Saturday afternoon at a sold out Tim Hortons Field in Hamilton.

Needing an eight-point margin of victory, the Ticats opened things up in the fourth quarter to earn a decisive win over the Alouettes, clinching not only a playoff spot over the idle Argos but the right to host the Eastern Final on Nov. 23, in a stadium where the Ticats are now 6-0 this season.

After defeating the REDBLACKS on Friday night, the Argos needed a Hamilton loss in order to make the post-season. The Ticats needed to win outright to make the playoffs, while a win by eight points or more would put them in the Eastern Final.

The Saskatchewan Roughriders enter the 2014 CFL Playoffs on a high note, after running all over the Edmonton Eskimos on the way to a 24-17 win on Saturday night at Mosaic Stadium.

The Riders built a 16-4 halftime lead after rushing for 172 yards in the opening 30 minutes, while the defence held off Matt Nichols to end a seven-game losing streak and head into the post-season with some momentum.

Nichols led the Esks on a late comeback bid, pulling them to within just seven with a few minutes remaining — but given the ball with under a minute left, couldn’t march his team 105 yards for the tying score as the Green and White held on for a win in their season finale.