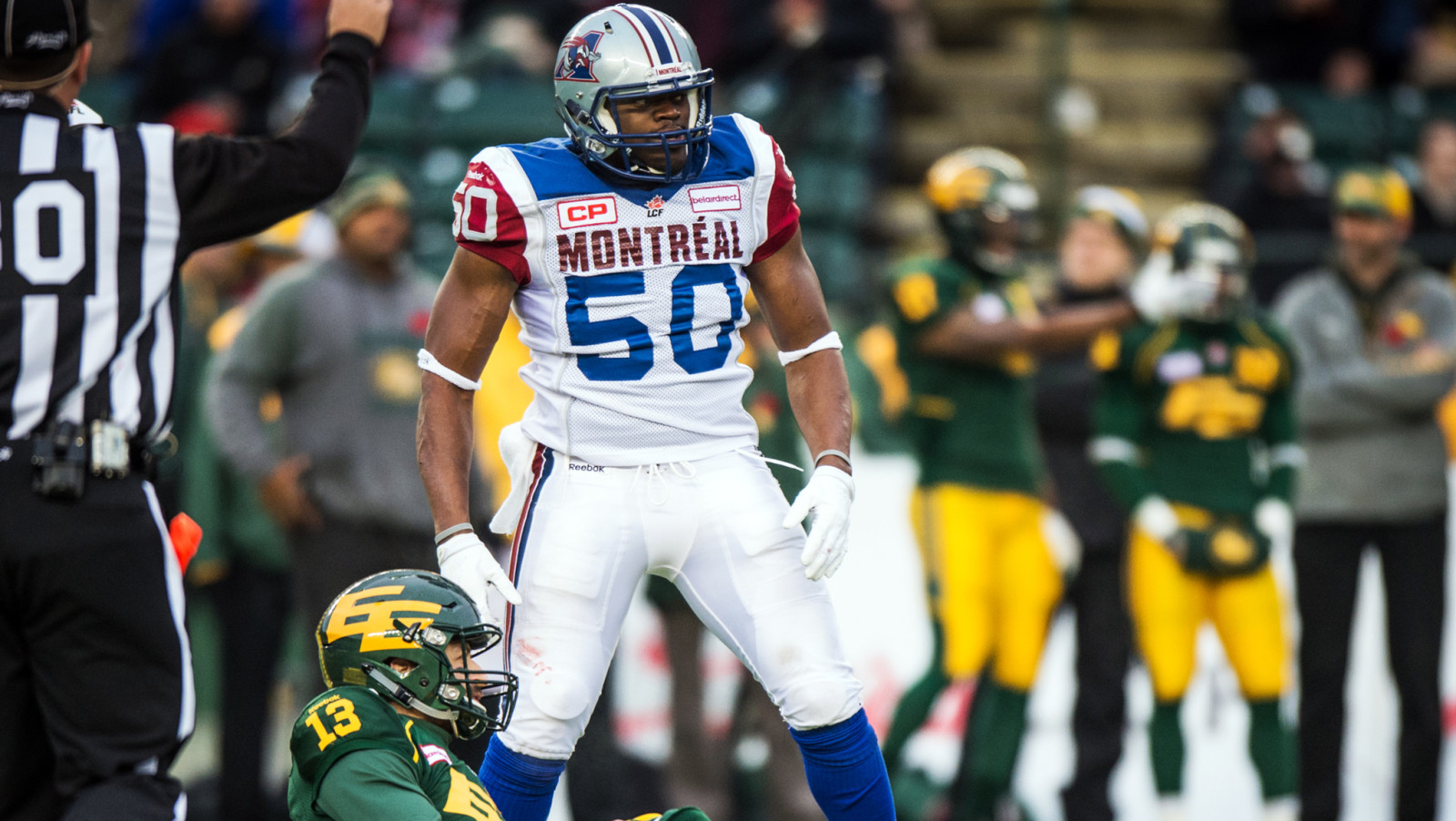 TORONTO — CFL.ca has you covered with all the latest chatter and rumours regarding free agency from CFL.ca writers, players and FL insiders.

Als shopping Muamba?: Herb Zurkowsky of the Montreal Gazette is reporting that the signing of former San Diego Charger Vaughn Martin may have made former all-star linebacker Henoc Muamba available on the trade market:

Raymond set to join Stubler in Toronto: Keon Raymond has made a decision, as the Calgary Sun‘s Scott Mitchell says the veteran SAM linebacker is headed to Toronto to join Rich Stubler’s defence:

Keon Raymond is signing with the Toronto #Argos. Ends an amazing eight-year run with the Stampeders. #CFLFA

Fuller takes flight?: Is Jeff Fuller on his way to the NFL? According to Scott Mitchell, the Stamps’ free agent has a deal in place with the Seattle Seahawks:

Receiver Jeff Fuller has a deal in place with the Seattle #Seahawks, per source. #CFLFA

Waters flowing south: The Argos won’t be getting kicker/punter Swayze Waters back in the fold, as he’s landed a contract with the NFL’s Carolina Panthers:

Flyin’ Elsewhere: According to reports, Chad Owens has elected to sign with the rival of his now former club, inking a deal with the Hamilton Tiger-Cats.

According to multiple #CFL sources, Chad Owens will sign with the #Ticats. — Matthew Scianitti (@TSNScianitti) February 11, 2016

Bulcke closing in on decision: National DL Brian Bulcke has offers from a pair of Ontario clubs and is expected to land on a decision Thursday according to Gary Lawless:

Waters hoping patience pays off: International kicker Swayze Waters will not decide on whether or not to re-sign with the Argonauts or another CFL team until he has completed a tryout with the Carolina Panthers.

Swayze Waters #CFLFA plans on hold until he has his #NFL tryout with Carolina on Wed. — Farhan Lalji (@FarhanLaljiTSN) February 10, 2016

Riders add two more on defence: The Riders have added Otha Foster and could reportedly be set to add Justin Capicciotti as well:

The Justin Capicciotti deal to the #Riders, reported by @SUNMitchell, is confirmed. Four teams apparently in the running. #CFLFA — Kirk Penton (@PentonKirk) February 10, 2016

Three teams bidding for Sherritt’s services: According to Kirk Penton, the Argonauts, Stampeders and Eskimos are all still in talks with JC Sherrit’s camp.

Bombers had shot at Cappiciotti: Penton also states that the Bombers’ signing of Keith Shologan came after they made an offer for coveted FA Justin Cappicotti.

I’m told #Bombers yesterday put in an offer to DE Justin Capicciotti, who said no. So they turned to Shologan. #CFLFA — Kirk Penton (@PentonKirk) February 10, 2016

Laurent decides to stick with Ticats: It seems like after taking offers from Montreal and Saskatchewan, Ted Laurent has signed a deal with Hamilton.

Bombers bolster D-line — again: The Bombers continued to be a powerhouse on the first day of free agency, this time reportedly coming to terms with interior defensive lineman Euclid Cummings according to CFL.ca’s Justin Dunk:

Fantuz staying home: According to the Hamilton Spectator‘s Drew Edwards, local receiver Andy Fantuz has agreed to stay in the Hammer:

Stewart, Edem set to join Lions’ secondary?: The BC Lions could be getting some help in their defensive backfield, as they’re reportedly closing in on former Ticats Brandon Stewart and national Mike Edem:

Hearing the #Als have made an offer for @REDBLACKS CB Jovon Johnson. Also am told #Als continue working on a deal for Winston Venable. — Herb Zurkowsky (@HerbZurkowsky1) February 9, 2016

Meanwhile, CFL.ca’s Justin Dunk is reporting that Samuel Giguere has signed a two-year contract with the Montreal Alouettes.

Stamps could be in on JC Sherritt: According to the Calgary Sun‘s Scott Mitchell, the Stamps have kicked the tires on free agent linebacker JC Sherritt:

White Headed To BC?: According to reports RB John White is NOT on his way to BC, but offer for Jeremiah Johnson is real…

Reports that RB John White has signed with #BCLions are false. They haven’t made him an offer. Have offered RB Jeremiah Johnson though. #CFL — Farhan Lalji (@FarhanLaljiTSN) February 9, 2016

Lions in on Capicciotti?: According to the Calgary Sun‘s Scott Mitchell, the Lions have made an offer to defensive end Justin Capicciotti, a Simon Fraser graduate who has 23 sacks over the last two seasons:

BC Lions have made an offer to 26-year-old DE Justin Capicciotti. #CFLFA — Scott Mitchell (@ScottMitchellPM) February 9, 2016

Medlock Winnipeg Bound?: The Hamilton Spectator‘s Drew Edwards has confirmed that Justin Medlock is signing with the Bombers:

Ottawa leading Trevor Harris sweepstakes?: According to TSN’s Matt Scianitti, the REDBLACKS may have landed themselves the biggest fish in the market.

Andrew Harris heading home? Andrew Harris may be on his way to his hometown of Winnipeg, according to reports.

Bourke getting offers from Argos: Josh Bourke may join his old offensive coordinator in Toronto as reports indicate they have had talks:

Sources tell me #Alouettes and Josh Bourke have made progress, but Argos are very interested and have made an offer #TSN690 — Joey Alfieri (@joeyalfieri) February 9, 2016

Harris A Top Target: Multiple Offers In for Trevor Harris as deadline hits:

Riders Making Late Push On Ainsworth: As per Gary Lawless…

Natey Adjei to test Free Agency: Another Canadian WR to hit the market.

#Argos receiver Natey Adjei told me he’s likely going to test the market despite getting what he calls a fair offer from team. #CFLFA #CFL — Mike Hogan (@tsnmikehogan) February 9, 2016

Chad Owens has not yet received an offer from #Argos. He told me “just waiting for 12 o’clock.” #CFLFA — Mike Hogan (@tsnmikehogan) February 9, 2016

Who Gets Big Fish?: No read on Ted Laurent and where he will land.

Don’t get the sense any @cfl team has a bead on Ted Laurent and reported 300 k price tag. He’s biggest fish. Not sure he lands today #cflfa — gary lawless (@garylawless) February 9, 2016

REDBLACKS set to lose plenty: As per Tim Baines…

Ryan Smith To Test: As Per Gary Lawless Riders will not reach a deal with Smith.

sounds like @sskroughriders receiver Ryan Smith will hit market. Riders worked for a deal but he wants to see what’s out there #cflfa @cfl — gary lawless (@garylawless) February 9, 2016

Gillanders Headed To Ottawa?: Is the local boy headed home?

as of right now both Josh Bourke and Winston Venable appear headed for #cflfa unless a deal with @MTLAlouettes comes together fast @cfl — gary lawless (@garylawless) February 9, 2016

Getzlaf won’t re-sign: According to Gary Lawless, WR Chris Getzlaf will not reach a deal with the Riders prior to noon ET.

Stafford hoping to stay put: Breakout star receiver Kenny Stafford is a pending free agent on Tuesday, but he tweeted Monday that he hopes to stay in Edmonton:

Fans of Edmonton I have expressed my feelings to stay in the green and gold — Kenny Stafford (@Kstaff07) February 8, 2016

Messam back with Stampeders: Jerome Messam has all but confirmed his re-signing with Calgary, tweeting this picture Monday evening:

Lions not done there: After expressing hopes to come to terms with both Lulay and Chris Rainey, it appears the Lions have done just that as Lalji also reports the team has reached an extension with Rainey:

Time running out for Ticats?: While some time still remains before noon on Tuesday, TSN‘s Gary Lawless says things are quiet between the Ticats and their pending free agents, including the much talked about Ted Laurent:

Argos lock up Greenwood?: The Argos have locked up another key piece of their national nucleus according to CFL.ca’s Justin Dunk, agreeing to terms with linebacker Cory Greenwood:

Bombers could be after Waters, Medlock: Winnipeg could be looking to make a big splash in the kicking game, as the Hamilton Spectator‘s Drew Edwards reports the Bombers are interested in Swayze Waters and Justin Medlock:

S.J. making a push?: With Winston Venable less than 24 hours from becoming a free agent, Als star receiver S.J. Green is pushing for the team on Twitter so sign the veteran linebacker:

I really hope the @MTLAlouettes aren’t silly enough to let Winston Venable slip away. He needs to be on our team. Make the necessary moves — SJ Green (@SJ19_19SJ) February 8, 2016

Still waitin on Winston’s name to pop up on the CFL site saying he resigned. This decision can’t be that hard to make. Make room for the guy — SJ Green (@SJ19_19SJ) February 8, 2016

Fans of Edmonton I have expressed my feelings to stay in the green and gold — Kenny Stafford (@Kstaff07) February 8, 2016

Hoffman-Ellis hitting free agency: It’s all but certain Lions linebacker Alex Hoffman-Ellis will become a free agent on Tuesday, as the 26-year-old linebacker tweeted Monday that he will not be back in BC in 2016:

In this airport just thinking… I’m pissed I won’t be in BC this season. But someone’s gonna get a baller. And I’ll embrace wherever I go. — Alex Hoffman-Ellis (@Hofftimus_Prime) February 8, 2016

Lulay, Lions come to terms: According to TSN‘s Farhan Lalji, the BC Lions and Travis Lulay have agreed to terms on a two-year contract extension:

Stephen, Ticats getting closer: Both Gary Lawless and Justin Dunk are reporting that a deal between national DB Courtney Stephen and the Hamilton Tiger-Cats is essentially complete:

New deal for Courtney Stephen with @Ticats is in finishing stages. Will be announced before #cflfa begins on Tuesday @cfl — gary lawless (@garylawless) February 7, 2016

If Laing hits the market, Eskimos will have a good shot at him.#CFLFA — Don Landry (@CFLLandry) February 6, 2016

Lions zeroing in on Lulay, Rainey before Feb. 9: According to the Vancouver Sun‘s Mike Beamish, the BC Lions are zeroing in on two pending free agents ahead of Tuesday’s start of free agency:

All quiet on the Als/Bourke front: It looks like Montreal’s prized offensive lineman and the club are far apart on talks according to Gary Lawless:

Latest out of Montreal is things are all quiet between OL Josh Bourke and @MTLAlouettes look for a last minute push on this one #cflfa @cfl — gary lawless (@garylawless) February 7, 2016

Chambers’ days in Edmonton done?: Last season’s Most Outstanding Canadian in the Grey Cup will likely find another club, this according to Don Landry:

Harris and Argos negotiating?: Arguably the biggest name in the free agent market come Tuesday will be quarterback Trevor Harris.  Argos GM Jim Barker said last December that they were hopeful he would be back.   As the deadline nears, could negotiations be back on between the two parties?  TSN’s Matthew Scianitti reports they may have:

Also hearing from #CFL sources negotiations between #Argos and Trevor Harris have picked up. Sides are talking hoping to get process moving — Matthew Scianitti (@TSNScianitti) February 5, 2016

Owens, Argos not so much: Sticking with the Argonauts, Mike Hogan reported earlier in the week that star slotback Chad Owens wishes to remain in Toronto the two sides are far apart in contract negotiations, GM Jim Barker told TSN‘s Mike Hogan. Owens is due to become a free agent on Feb. 9.:

Messam could avoid free agency: According to Scott Mitchell, Jerome Messam re-joining the stamps is a real possibility.  The bruising tailback said a month ago that he would welcome a return to Calgary:

Huff also says he thinks a deal with RB Jerome Messam could get done by the time #CFLFA bell rings at 10 a.m. MT on Tuesday. — Scott Mitchell (@ScottMitchellPM) February 5, 2016

REDBLACKS defence will likely see turnover: REDBLACKS GM Marcel Desjardins conceded in an interview with TSN 1200 that the team will have some holes to fill on the defensive side of the ball with some of this off-season’s departures, some of which may be filled through signing new talent from south of the border. Justin Capicciotti, Jovon Johnson, Keith Shologan and Brandyn Thompson are all defensive starters set to hit the market on Feb. 9.: