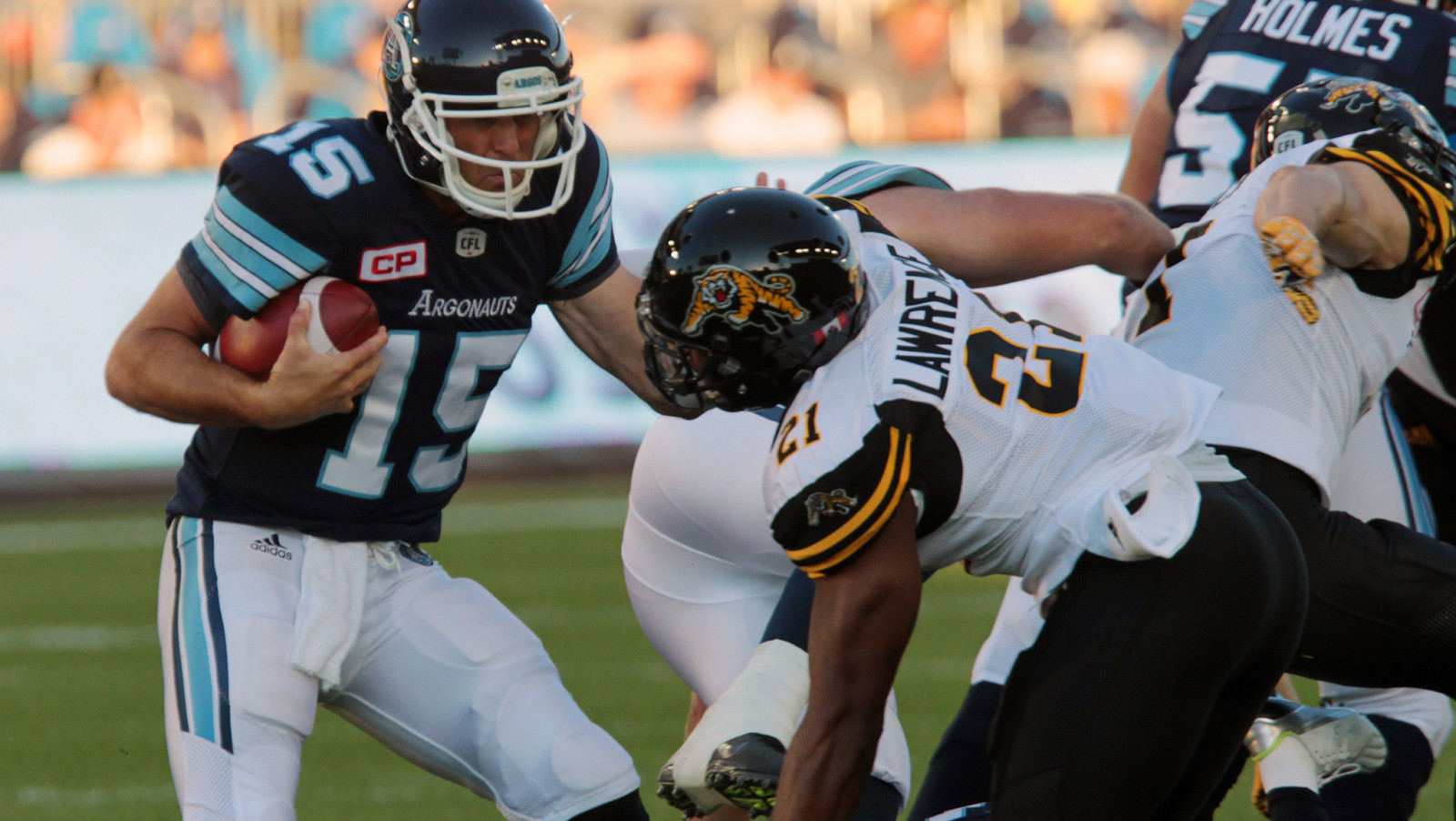 That was Ottawa’s first win in Edmonton since 1983. Bet they celebrated by blasting some Duran Duran in the locker room afterward. Maybe some Eddy Grant, too.

Here are the Week 1 takeaways:

1. Punt teams can be your worst enemy and your best friend in any given game. 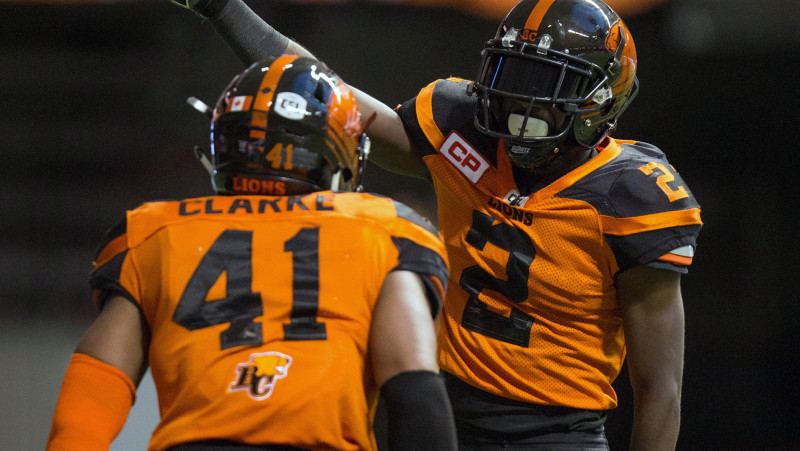 The BC Lions and their kicker, Richie Leone, had a nightmare of a first half against the Calgary Stampeders. Three blocked punts. Three. In one half. Returner Chris Rainey (by the way, if you’re still underrating Chris Rainey, that’s gotta stop) turned those frowns upside down as he jetted through the seams with a second half punt return touchdown to give the Lions the lead. BC’s punt units went through more mood swings than Freddie Highmore in a typical episode of Bates Motel.

2. Do not take your eyes off Simoni Lawrence if you’re dining with him. 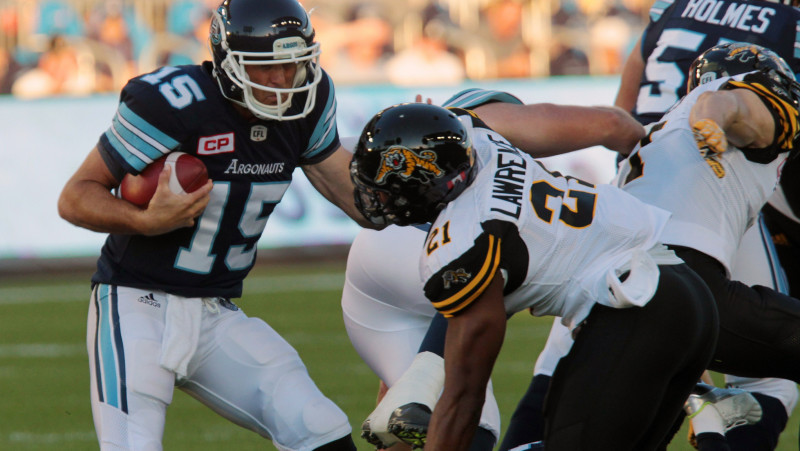 Simoni Lawrence bears down on Ricky Ray during the season-opener at BMO Field (CFL.ca)

He’ll take ALL the food off your plate. Guzzle your beer. Scarf your dessert. Probably grab your napkin and cutlery, too. When Simoni Lawrence wants it all, he takes it all as he did on Thursday night against the Toronto Argonauts. Seven tackles. Two sacks. A fumble recovery. A pass knockdown. An interception return for a touchdown. The Ticats defence must have at least four players with the number 21 and the name “Lawrence” on their back. How else can one explain stats like that?

Last year’s East Division Most Outstanding Defensive Player can’t be getting better, can he? I’d write more about his game one dominance but he just walked in and took my notes before I could react. On the way out he tackled my stove just for the hell of it. I can’t use it when it’s lying on its side like that.

3. Anthony Calvillo and Kevin Glenn will be making beautiful music together this season. 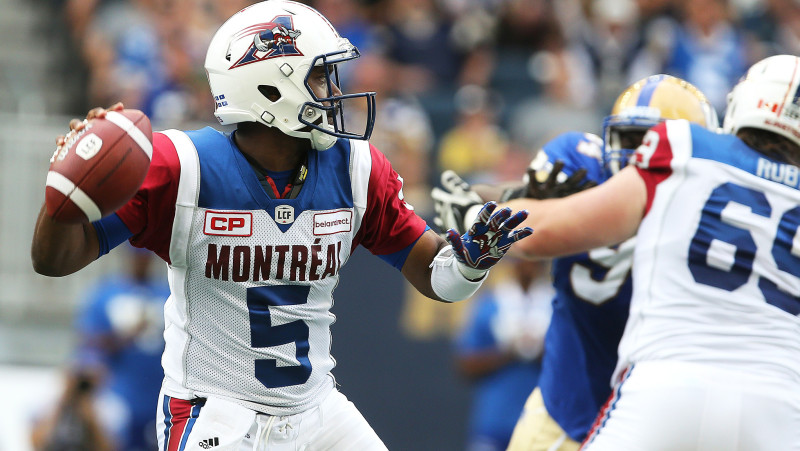 Not that there aren’t others in the orchestra. In Friday’s win over Winnipeg, receivers Duron Carter and S.J. Green played masterfully for the Montreal Alouettes’ offence and veteran Nik Lewis helped make it go with the occasional booming presence of a kettle drum. With running back Tyrell Sutton providing quality solos again and again, an Als’ offence that has been searching for answers since Calvillo’s retirement seems to have found them.

Montreal’s win over the Winnipeg Blue Bombers showed that Calvillo’s got the right idea as an offensive coordinator, no doubt taking ideas from his hall of fame playing career and mapping them out for Glenn to execute. That Calvillo has a quarterback whose smarts echo his own but who has a stronger arm in addition to that makes for intriguing possibilities for the Als as the season progresses.

4. Jerome Messam needs to be fed. 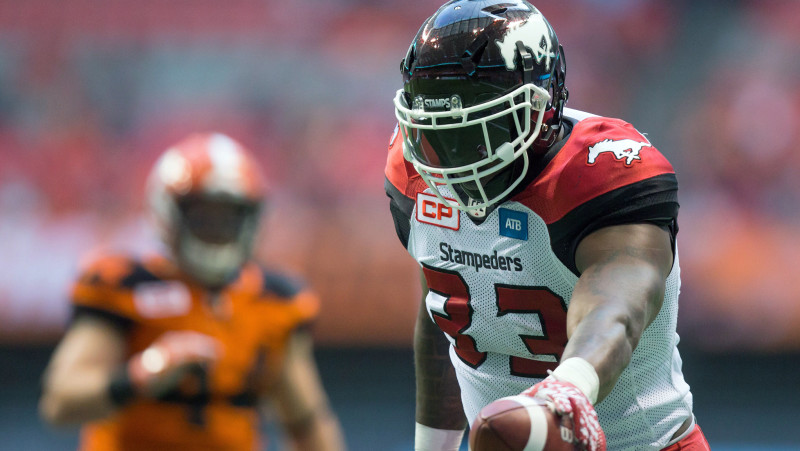 The big, bruising back was an afterthought for a big chunk of Calgary’s loss in Vancouver. He reportedly showed some frustration on the sideline, too, after his third quarter, two-yard run into the end zone widened the Stampeders’ lead to 16-6, saying something about giving him the ball near the goal line instead of trying quarterback sneaks (Calgary got stymied on a third down rush by QB Drew Tate in the second quarter).

In all, Messam rushed just seven times in the game. The big guy wants the rock and he does seem to be like one of those goaltenders who’s at their best when they get a lot of shots.

5. A CFL game can sometimes be like crock pot cooking. 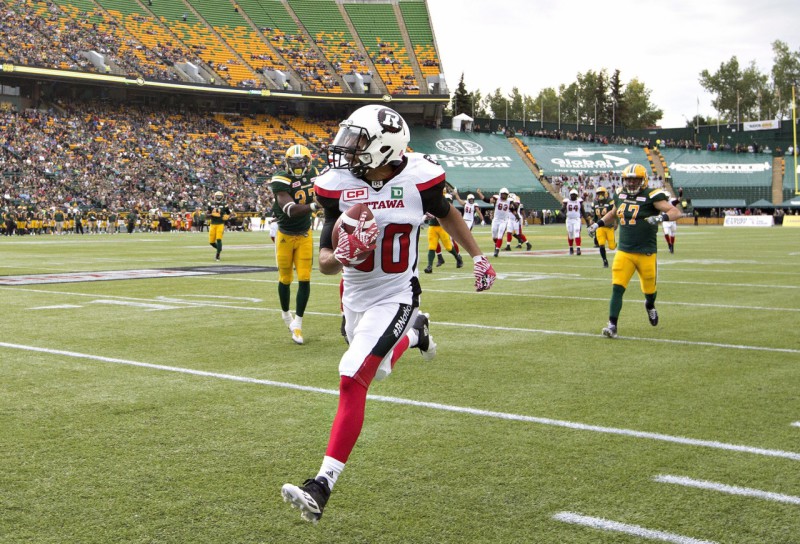 Chris Williams puts on the after-burners during one of his two touchdowns vs. Edmonton (The Canadian Press)

Saturday night’s tilt between Ottawa and Edmonton was a good example of that. All the ingredients were there for something good. Two powerful teams, one of them with the other’s former offensive coordinator now as its head coach. A Grey Cup rematch. High-powered offences. A little taunting from the home side’s front office and fan base. Toss all those ingredients into the pot and start ‘er up. After half an hour, you look into that crock pot and it seems like nothing is happening. That’s so disappointing. Have faith, though. It’ll happen. At the end of it all, you pop the lid off and you are greeted with all that glorious deliciousness.

In the case of the Eskimos vs. the REDBLACKS, we ended up with a perfect pot of chili, spiced with a Chris Williams/Adarius Bowman receiving display mixed in with three quarterbacks who combined for a QB rating of 121.8 as well as five touchdowns and over 900 yards in passing. Overtime was like finishing it all off by melting some grated cheddar on top.

And Finally: The Ticats’ defence looked like that WITHOUT Ted Laurent in the line-up. Yikes.