Landry: #CFLWired will give us unique window into sounds of the game

Landry: #CFLWired will give us unique window into sounds of the game

Well, this should be fun.

This Sunday night, when the Hamilton Ticats take on the Calgary Stampeders at McMahon Stadium, we’re going to get a good idea of what quarterbacks Bo Levi Mitchell and Zach Collaros as well as head coaches Kent Austin and Dave Dickenson have to say during a game.

It’s being called the “Live Mic Broadcast” and it will bring football fans closer to the heat of regular season battle than ever before.

I think we’ve all been very, very curious as to what’s being said by the quarterback as he gathers his offence just before they jog to the line of scrimmage to set up a play. Often wondered what he might be saying, if anything, to a receiver that’s either just made a spectacular grab or – gulp – just dropped an easy one. Wondered what a QB might be saying to a defensive lineman as he pats him on the head after getting up from a sack. Or – and this is a good one – what his breath sounds like as he’s scrambling for his life on a broken play. Wondered what a coach was saying under his breath – or bellowing out – during a play.

Sunday night, we wonder no more. It’ll probably feel weird at first, but we’ll get used to it quickly, I’m sure, as we get a flavour of a CFL regular season game that we’ve not experienced before.

What I’m most looking forward to is getting a better idea of the on-field demeanor that quarterbacks Zach Collaros and Bo Levi Mitchell display. We already know that they are great leaders, everybody says so.

But just what does that leadership sound like during a game? How do they manage not only the play-calling, but their teams’ respective psyches as a game rolls on with its inevitable peaks and valleys? Are Mitchell and Collaros primarily carrot or stick guys? In other words, do they mostly coax the best out of their teammates with encouragement or admonishment?

“Everybody knows they’re the most important players on the field,” said Paul Graham, TSN’s Vice President and Executive Producer, Live Events, adding that the back-up quarterbacks will also by mic’d, just in case they are pressed into action.

“We will pick and choose when the mics are on and off,” said Graham, who will have his audio team work within guidelines that have been agreed upon by both teams in order to be certain everybody’s comfortable with the situation.

The TSN crew will also work to ensure that the sound matches the pictures, so you might not hear Collaros, say, talking about one thing while the screen is showing a replay of another thing entirely. As well, if you’re wondering about spicy language, Graham says the game will actually be broadcast on a ten-second delay, to ensure that no extra salty verbiage gets through.

Graham went on to say that if this Live Mic Broadcast proves to be successful, it could very well lead to more down the road, although that is far from being determined. All parties will wait to see how Sunday goes first.

It’s the immediacy of this exercise that’s so intriguing. We have, in the past, gotten the odd bit of sideline thankfulness from a player who’s just scored a major but beyond that, most of the in-game audio we’ve been privy to has come to us after the fact. Locker room pre-game speeches shown to us later in the game. Quick conversations between players are sometimes relayed to us, but usually later that night or in the days that follow.

This will offer us a very good glimpse into personalities, I think. 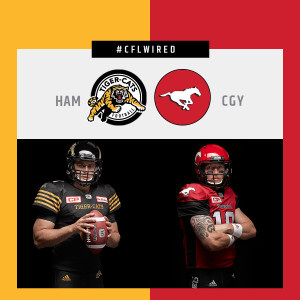 From the sidelines to the huddle, CFL ON TSN will take fans deeper into the game this weekend with a special Live Mic Broadcast featuring in-game sound from the Calgary Stampeders and Hamilton Tiger-Cats’ quarterbacks and coaches when the two teams face off this Sunday … READ MORE.

While the mics will not be open for play-calling or conversations between coaches and quarterbacks that are deemed strategic in nature – understandably so – the super-heated moments of a football game will be laid bare and that is precisely where we can learn more about a player’s competitive personality. Collaros and Mitchell are, of course, well aware that they will be mic’d up but I’ll wager that will not be top of mind the moment something very good or very bad happens.

Fans in few other sports get this kind of live action insight. The sport of curling has had players mic’d up on a live basis for years and the practice quickly became vital to helping viewers understand the strategies and thought processes of the players. (By the way, although a generation of curlers has entered the sport with the expectation they’ll be mic’d up for big events, you still get the occasional moment of emotion blurted out.) Once in awhile in golf you get a snippet of a conversation between a player and caddy although it is not by any means a usual occurrence. When we do get it, though, it’s terrifically insightful.

Just what kind of new insight the Live Mic Broadcast will provide us is yet to be seen.

I’m hoping, for instance, that Ticats’ linebacker Simoni Lawrence – reputed to be one of the best chirp artists out there – gets close enough to Mitchell so that we can hear him. Even if we don’t, eavesdropping on Mitchell’s responses should be compelling. Provided, you know, he offers them. I’m kind of counting on that from a quarterback who’s shown us that he’s no shrinking violet whether it be in interviews or on social media.

While the quarterbacks will be the only players wearing the microphones, I am thinking we’ll likely have Lawrence and others in close enough proximity to pick them up too. Will we hear a receiver complain “c’mon, man, I’m open ALL DAY”? Maybe we get a nice little back and forth between Charleston Hughes and Zach Collaros. Also, we’ll maybe get to hear which of Collaros or Mitchell likes to try to work the refs to their advantage.

With the coaches’ microphones going live from the snap to the finish of each play, we will have a smaller window of opportunity to glimpse the emotions of Austin and Dickenson. Being coaches, it’s understandable they’ve decided that they don’t want to give up too much of their strategic conversations on the sidelines. Not yet, anyway. As guinea pigs for this new initiative, I’m sure they (and all coaches for that matter) would like to get the results before deciding whether to loosen the reins on any future version of this experiment.

On that, I wouldn’t hold my breath, however. With football being a highly strategic game counting, in a large way, on an ability to surprise the opponent with what you’re doing at any moment, it might not be prudent to ever open up those microphones beyond what we’re getting on Sunday night. Again, that’s fully understandable. However, there will be no hiding behind clipboards for Dickenson and Austin during plays and I feel fairly certain we’re going  to get some kind of colourful display in there somewhere.

Mic’d up quarterbacks and coaches. Like I said off the top, this should be fun.