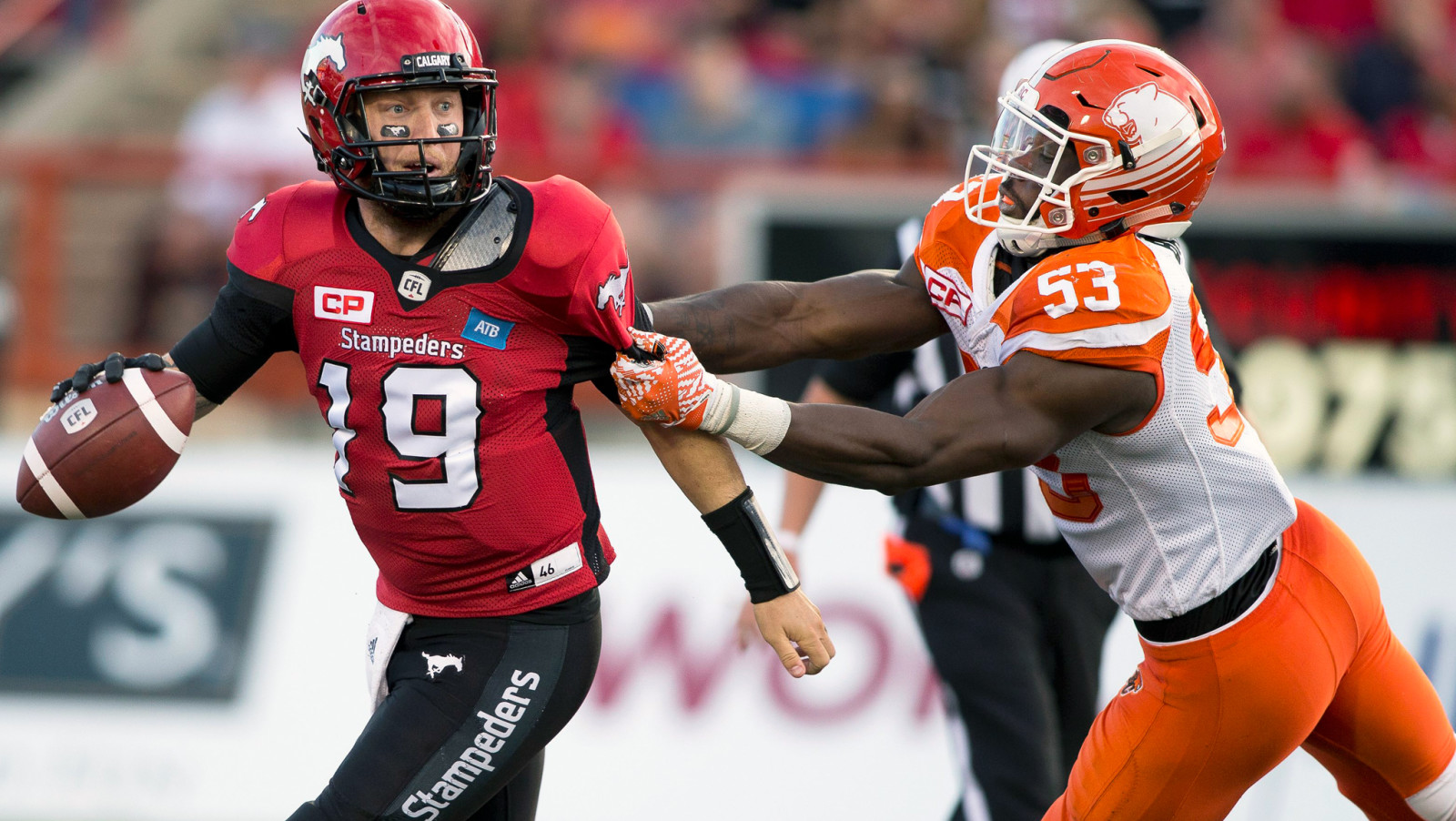 TORONTO — It appears Bo Levi Mitchell has some competition.

The Stamps’ gunslinger looks like the leading candidate for Most Outstanding Player through 11 weeks of the Canadian Football League season, but it’s not without dispute.

Mitchell has guided the Stampeders to an 8-1-1 record out of the gate and thrown a sterling 17:5 touchdown to interception ratio, taking the fewest sacks in the league and helping Calgary play mistake-free football week in and week out.

Until the Stampeders lose or Mitchell shows signs of struggle, the year-end honour is his to lose but there are still eight games to be played.

Mitchell will be pushed over the second half of the season by the likes of Mike Reilly, Trevor Harris and Zach Collaros, the latter of which has done nothing but light up the scoreboard in four starts since returning from a torn ACL.

Reilly, meanwhile, leads the CFL in passing yards as the Eskimos look to heat up over the second half of the season while Harris has the number one quarterback rating in the league after a torrid start to the season.

Quarterbacks have been king in what’s been a pass-heavy year, but no one should be ruled out with so much time to play.

With that, we look at the top candidates for Most Outstanding Player.

After losing his receiving title to Eric Rogers in 2015, Bowman is back to his number one spot again with an outrageous 1,008 yards through 10 games. What’s most impressive is that he’s posted these numbers despite cooling off considerably lately, failing to reach the 100-yard plateau in five of his last six games including three in a row.

Bowman’s impact on the Esks’ offence is instrumental, but he faces some stiff competition from the likes of Chris Williams, Naaman Roosevelt and teammate Derel Walker.

After flirting with an MOP-type season in 2015 with the Argos before being benched for Ricky Ray, Harris picked up exactly where he left off this year when Henry Burris went down in the opening game at Edmonton. An injury kept him sidelined for just over a month, but Harris continues to lead the league in quarterback rating, completion percentage, average and interception rate.

He’s supplanted a now-healthy Burris as the starting quarterback in the nation’s capital, and at this rate Harris has a chance to break a record for completion percentage and also win Most Outstanding Player.

In four games since returning from the torn ACL that sidelined him nearly a full calendar year, Zach Collaros has shown no sign of being stopped. Tough road losses to the league’s top two teams aside, the veteran pivot picked up exactly where he left off following an MOP-calibre season that was suddenly interrupted by the devastating injury last September.

Collaros has thrown for 377.5 yards per game and compiled an 14:2 touchdown to interception ratio in four games, most recently guiding the Ticats back from a 20-point deficit to beat the Argos on Labour Day. If you pro-rate his numbers over the remainder of the season? In 12 games, Collaros would finish with 4,530 yards, 42 touchdowns and six interceptions.

If that doesn’t scream MOP, what does?

Williams has slowed down after racking up 493 receiving yards in just his first three games, but his numbers this season say all you need to know. He’s eclipsed 100 receiving yards only once over his last seven games since that torrid start, but as we all know, the 28-year-old burner is capable of going off at any time.

Almost at 1,000 yards already and second in the league in that category, if Williams can get on a hot streak like we saw early in the season, an MOP isn’t out of the question — especially if it helps the REDBLACKS win the East Division.

Reilly set the pace early for CFL quarterbacks, putting himself on pace to break Doug Flutie’s all-time single-season passing record after four weeks of the season. He’s cooled off considerable since then, his worst performance coming on Labour Day against Calgary when he threw for a season-low 219 yards and just one touchdown to go with two interceptions.

With five interceptions in the last three weeks and his team sitting fourth in the West with a 5-5 record, Reilly isn’t a top option for MOP right now. That could change quickly, of course.

While five players have set themselves above the rest, there’s a lot of football left and there are many that can jump in the race at any time.

Andrew Harris and Jerome Messam are running backs that weren’t listed above and have put up strong numbers this season, despite 2016 being a pass-happy year.

Derel Walker would have been in the running a few weeks ago and could jump back in the discussion with one monstrous game. And if the Riders can start winning some ball games, don’t count out Naaman Roosevelt, who leads the league in targets and statistically has been as good as anyone out there.

Plus, who are some defensive players that could throw their name in the hat?

Below are some players on the bubble that could move up on the list at any time: