Berg vs. Ferg: Is it too late for the Alouettes? 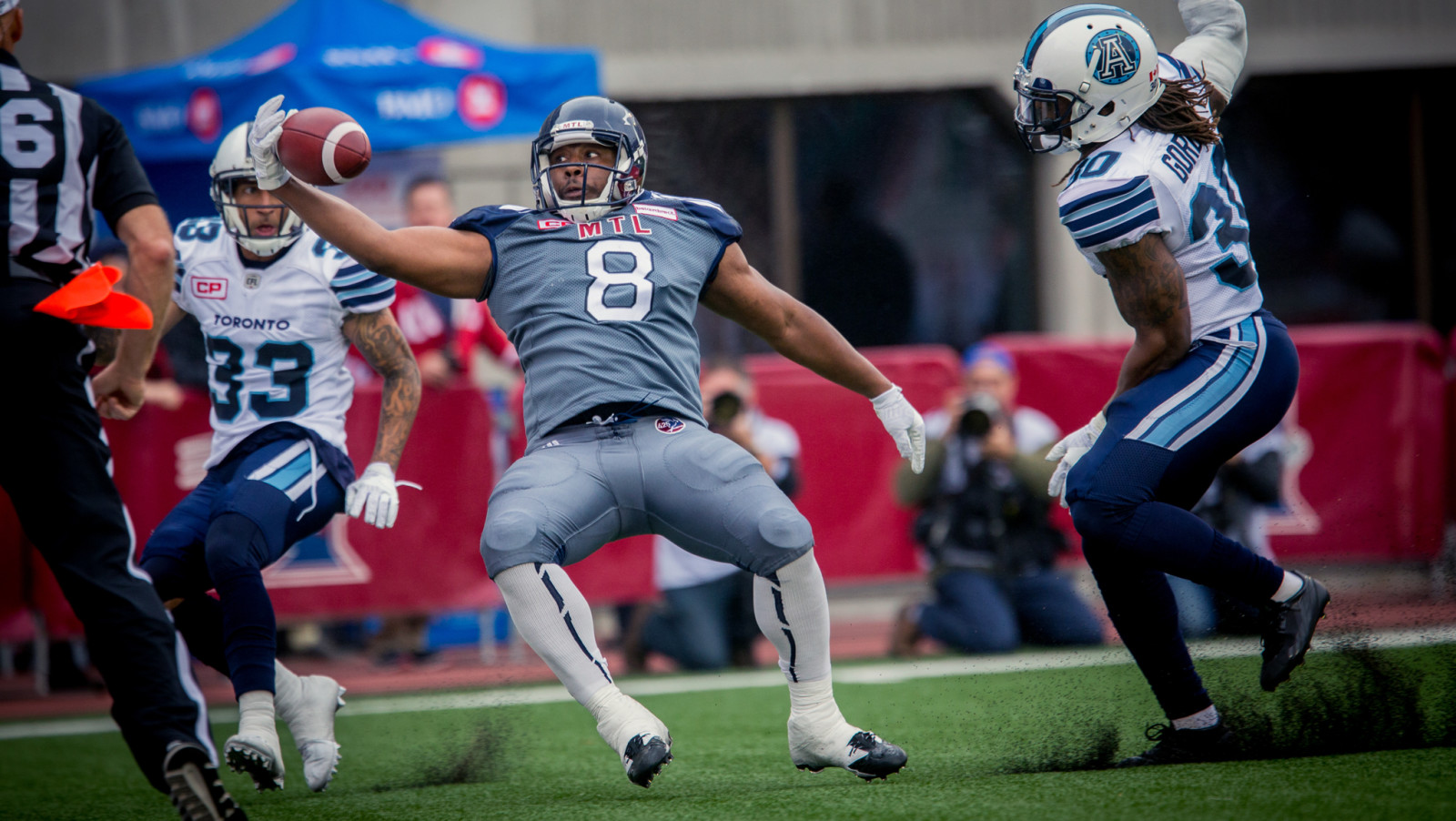 Berg vs. Ferg: Is it too late for the Alouettes?

Every week of the 2016 season, CFL.ca columnists Pat Steinberg and Marshall Ferguson debate over one of the league’s most contentious storylines. In Week 16, we ask the question: Have the Montreal Alouettes run out of time?

They might finally have a spark, but is it too late for the Alouettes to make a run?

That’s one of the questions as Week 16 arrives with all nine Canadian Football League teams still in the playoff picture. The Riders, Alouettes and Argos are on the outside of it all looking in, but some teams have better odds than others.

The three-win Riders are eight points back of a playoff spot and could be eliminated with a loss this weekend — only a minor miracle would see them make the post-season.

» Related: Alouettes among teams to get mic’d up for Thanksgiving 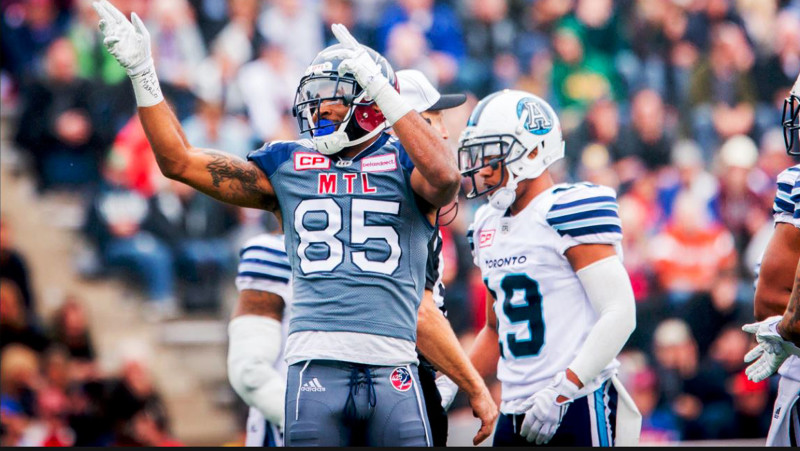 B.J. Cunningham celebrates during a Week 15 win over the Argos (MontrealAlouettes.com)

Toronto just released three of its top receivers and is going through a change at quarterback while losing seven of its last eight games.

The Alouettes? Maybe they have the best odds of any of the outsiders, entering Week 15 play with five games remaining — a game in hand on Toronto, Hamilton and Edmonton — and only four points back of the Ticats for a playoff spot.

It won’t be easy and the odds are against them, but the Alouettes have life. Jacques Chapdelaine has brought changes to la belle province and the team was dominant on both sides of the ball in his debut on the sidelines.

With a young Rakeem Cato, an aggressive defence and an ‘us against the world’ mentality, is it too late for the Alouettes to make some noise and jump back into the East Division playoff picture?

Pat Steinberg and Marshall Ferguson debate in the latest Berg vs. Ferg.

Listen, I wrote off the Montreal Alouettes just like the rest of you. I thought the CFL’s East Division had way too much fire power to keep Montreal in the conversation for a playoff spot.

The Argonauts traded for their future franchise quarterback; the Ticats were getting their star pivot back from a major knee injury and the REDBLACKS are defending East Division champions with a great amount of continuity and offensive fire power.

Something strange happened over the last month or so though. The Argos struggled to assimilate Drew Willy; the Tiger-Cats didn’t run away from the pack when Zach Collaros returned; and the REDBLACKS fumbled around searching for an identity while Ottawa football fans fear Trevor Harris might have hit the wall in the same way he did as the Argos’ starter by fall of 2015.

The Alouettes’ improved chances have quite honestly relied on the dominance of the West Division over the East and East Division teams’ back and forth squabbling where no team runs away with the crown.

The Alouettes play the Stampeders twice still this season which should be a daunting task, but we aren’t sure when the historic Stamps will start to take their foot off the gas in hopes of lining up playoff excellence. If Calgary backs off and the Alouettes can take a game from the Stampeders they will have achieved something no other team has been able to in the East this season which would lend a major upper hand in becoming a playoff team.

The Alouettes also play a struggling Tiger-Cats team and a defunct yet reborn Riders roster to finish the season – both winnable games – but the true caveat to the Alouettes somehow scrounging together a playoff appearance in 2016 will come this weekend.

Edmonton appears to be in line for the crossover spot by taking away third place from the East. Montreal must handle Edmonton at home in order to keep hope alive. With a passionate fan base reignited by Jacque Chapdelaine’s appointment as head coach, anything is possible.

Too little, too late…but that’s okay

There should be renewed excitement surrounding the Montreal Alouettes right now. In their first game with a new coach and a new offence, the Als crushed the Toronto Argonauts 38-11 to finish off Week 15 of the season. Unfortunately, I just can’t see that excitement translating into post-season football in 2016; Montreal has too steep a hill to climb with added obstacles in its way.

The sheer math of the situation is daunting to begin with. At 4-9 and with five games to go, the Alouettes need to close a three-game gap to the 7-7 Edmonton Eskimos who, thanks to the crossover, currently hold down an East Division playoff spot. That means the absolute worst Montreal can do down the stretch is 3-2 while hoping the Eskimos lose their final four games. That in and of itself is pretty unrealistic and that’s before we analyze schedules.

At first blush, you might like the way Montreal’s remaining five games fall. Week 16 sees the Als go head to head with the team they’re chasing in a home date against Edmonton on Monday afternoon. The problem is, Montreal’s remaining schedule from there is about as tough as it gets.

The Alouettes finish their season with two games against the powerhouse Calgary Stampeders and finish their year against an always-dangerous Hamilton team. Knowing that final game against the Tiger-Cats is likely going to mean a ton to the opposition, that game becomes even more difficult. Just meeting the bare minimum requirement of three wins down the stretch is going to be tough for Montreal.

Edmonton’s schedule isn’t easy down the stretch, either. Following Monday’s game against the Als, the Eskimos finish with the Lions, Ticats, and Argos. Knowing the makeup of the defending champs, and knowing how they’ve played the last couple of weeks, going 0-4 to close out the season just doesn’t seem in the cards.

As much as I don’t see the Alouettes doing what they’d need to to punch their post-season ticket, there’s no harm in finishing the season strong. Jacques Chapdelaine is in as head coach and the Als can put their final five games to good use regardless of their playoff fate. Montreal has a chance to get Chapdelaine’s offence down pat while also building up a much-needed new identity.

If Montreal ends up playoff bound then great. By finishing the season strong, though, at the very least the Alouettes will put themselves in a much better post-season spot for 2017.

Fan Poll
Is it too late for the Alouettes to make a run?
Yes
Vote
No
Vote
Submit View Poll Results