TORONTO — After his most effective season to date, and winning the Most Outstanding Player award on Thursday night, Calgary’s quarterback Bo Levi Mitchell wouldn’t take complete credit for the success he had in 2016.

In his fifth year in the Canadian Football League, the Katy, TX native drove the offence that helped take the Stamps to the 104th Grey Cup presented by Shaw and to a 15-2-1 regular season record.

“It’s cool to get recognized for all of the hard work that you’ve put in not just this year but over your life and your career to get yourself to this point,” Mitchell said after beating the East’s nominee Ernest Jackson for the nod. “I know it’s cliché but as an athlete, you feel selfish being up here because there’s been so many people that have been a part of what it is to get me here including guys like my high school coach.” 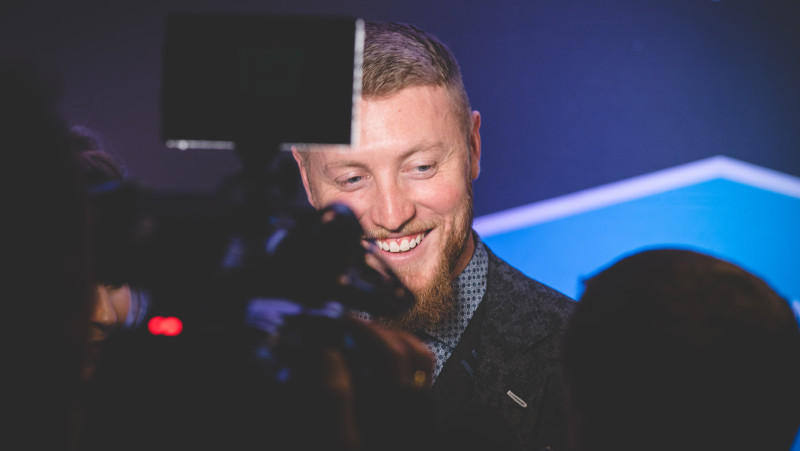 Bo Levi Mitchell poses for the media after winning the Most Outstanding Player award (Johany Jutras/CFL.ca)

Someone else that helped Mitchell to his first MOP honour and finish the year with the second most passing yards in the league – along with 32 passing touchdowns, the most in the CFL through 20 weeks – was his teammate Derek Dennis, who was also a winner on Thursday night, being named Most Outstanding Offensive Lineman.

Dennis helped anchor an offensive line that only allowed Mitchell to be sacked 20 times throughout the entire season – the least amount in the CFL.

His current coach, Dave Dickenson, who took home the trophy for AGF Coach of the Year, and two other Stampeders, Jerome Messam and DaVaris Daniels, who won Most Outstanding Canadian and Most Outstanding Rookie respectively, also aided Mitchell to reach his full potential in the 2016 campaign.

“We put in the work,” Mitchell said of why so many of his teammates won awards. “We read the newspaper clippings in the beginning of the year and in preseason and took to heart what people said about us and what we were going to be. We all took it to heart individually but more as a team.

“We talk about those things. We said, “we know people don’t want us to succeed, we know they want us to fail and let’s go prove them wrong.’”

After the flashes of the cameras and the excitement of the Shaw CFL Awards ceremony at the Art Gallery of Ontario in downtown Toronto fades, Mitchell’s focus shifts to the 104th Grey Cup, where he’ll hope to prove all of the naysayers that he, and his team, were the best team of 2016.

“I’m going to go home and put this trophy and this suit in the closet and pull out my game plan and get ready for Sunday.”