Gray makes the most of his Pro Day

Gray makes the most of his Pro Day

He lifted weights. He jumped vertically and horizontally. He ran around cones and, later in the day, flashed the footwork that has already made the University of Manitoba guard one of the best pro prospects to come out of the Bisons program since defensive tackle David Onyemata did the exact same thing last year before being drafted by the New Orleans Saints.

But it was at the end of his Pro Day at the Subway South Indoor Soccer Complex when Gray did something seldom – if ever – seen a combine-type workout.

The 6-foot-6, 318-pound engineering student hopped up on a unicycle and twirled around on the thing in front of brass from 10 pro teams – eight NFL organizations and both the Winnipeg Blue Bombers and Saskatchewan Roughriders. 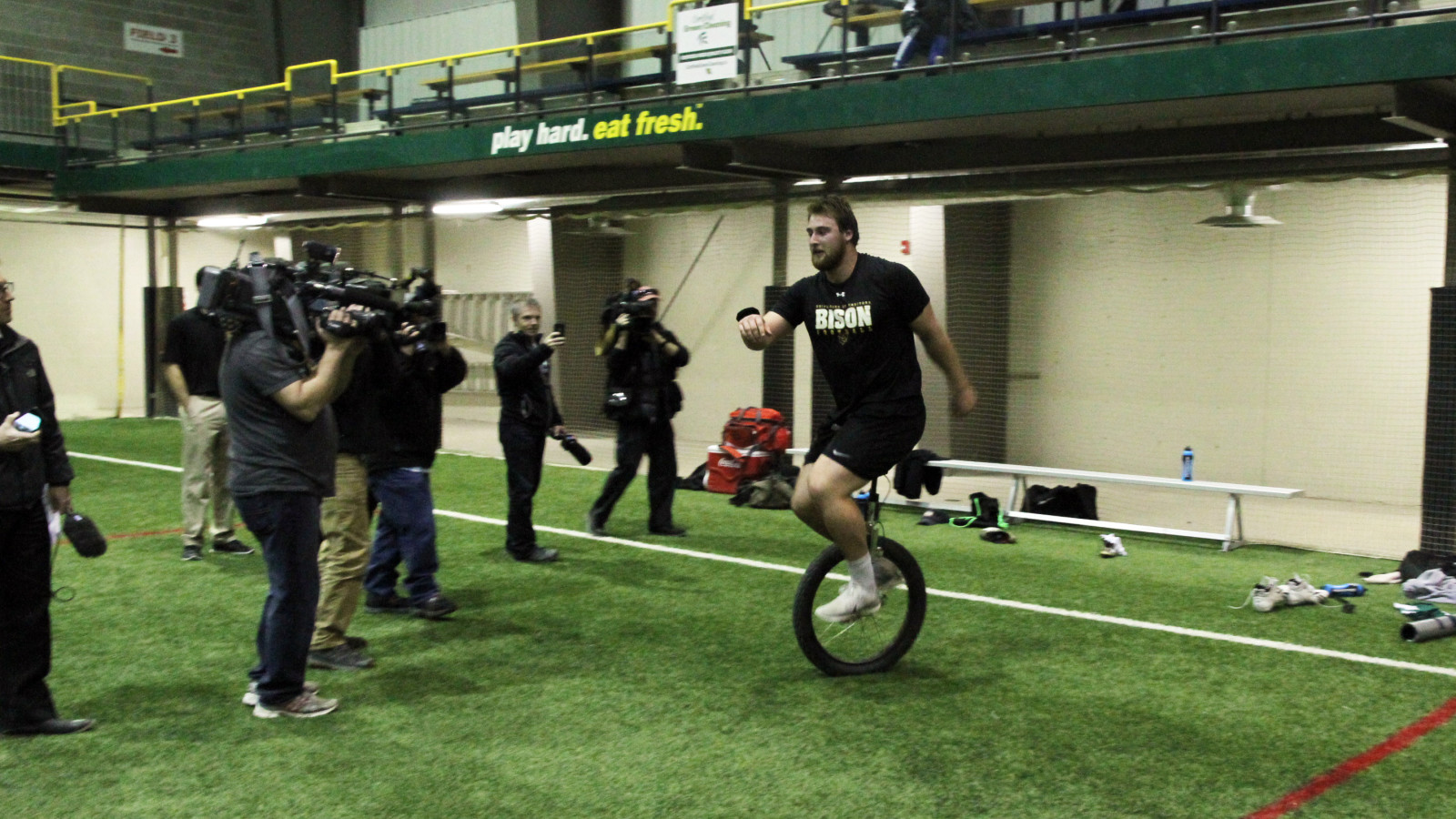 While it’s unconventional, Gray turned heads with his performance on the unicycle (Chris Zuk/CFL.ca)

“For a 315-pound man,” said a scout from the Green Bay Packers, “that’s impressive.”

“I actually started that in grade nine,” Gray told a swarm of reporters after his workout. “I was a lot thinner then. Unfortunately, I don’t get to do it as much but it comes back to you.

“I just mentioned it in passing and thought it would be something to distinguish me from anyone else. Even if isn’t football related they’ll be like, ‘Hey, that was a crazy thing… that guy rode a unicycle’.

“It’s just a little more recognition from your name and coming from a small school, it can’t hurt.”

Asked if he could also juggle while riding, Gray grinned and added:

“I can’t juggle… that’s what’s stopping me from the circus.”

As for the feedback he might have received from scouts during the day-long testing, Gray joked “I haven’t talked much to them in detail yet. But, as you could see, they didn’t leave halfway through so that’s a good sign.”

Gray, 22, was a U Sports All-Canadian last year with the Bisons and was the sixth-ranked prospect for the CFL Draft by the league’s scouting bureau last December. But he opted to pass on attending last weekend’s CFL combine in Regina to concentrate on holding his own pro day.

And here’s where Gray’s situation gets fuzzy for all the CFL teams who have him on their radar. The interest from the NFL should be clear by the CFL Draft on May 7 – the NFL Draft goes April 27-29 with free-agent signings of those not selected coming immediately after that – but that uncertainty can affect where he is drafted in Canada.

Given the level of NFL interest, Gray would best be termed a ‘futures’ pick for a CFL team – a player who could be in Canada before training camps start here, or after NFL camps are completed in early September, or somebody who heads south and never looks back. 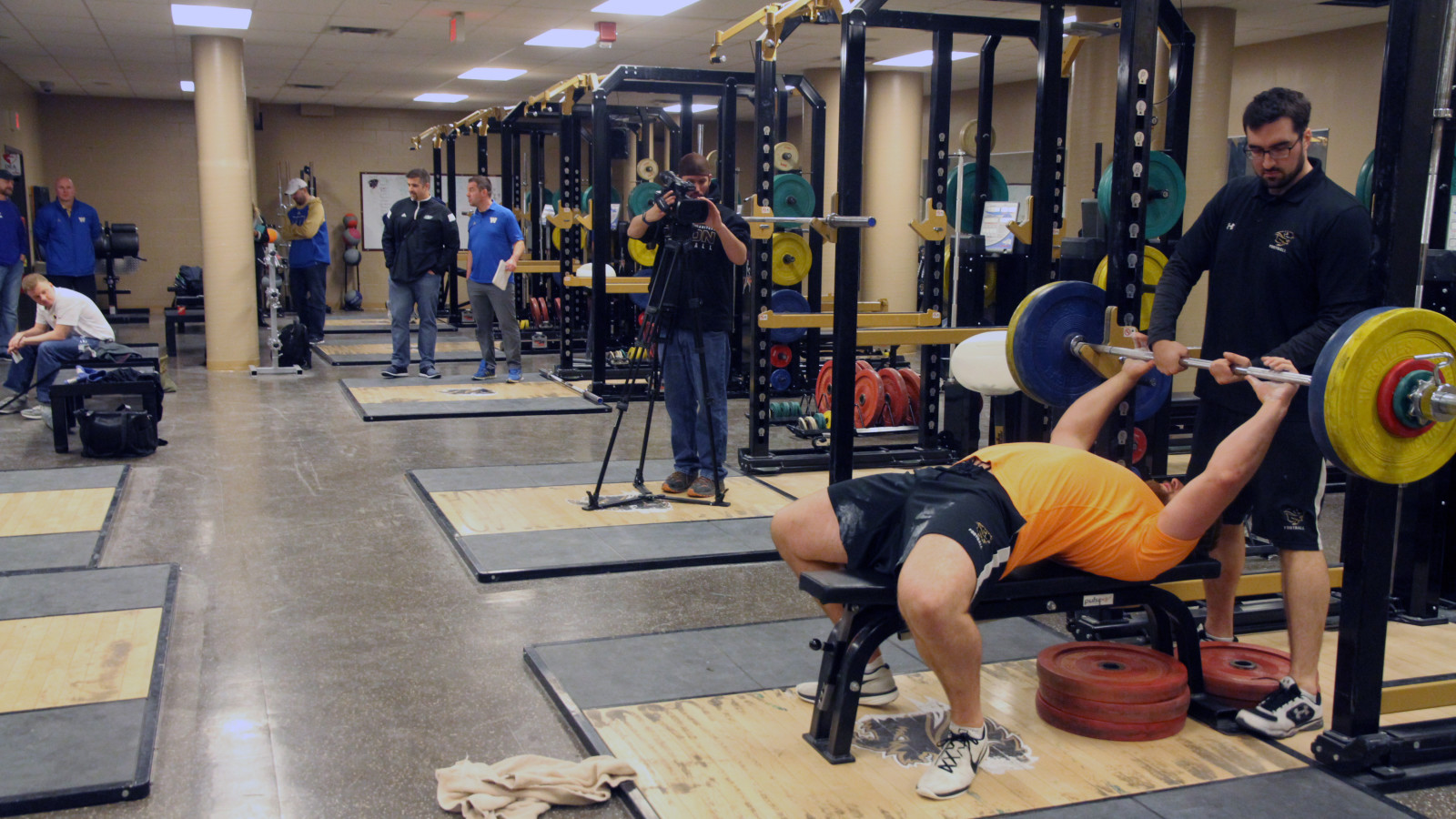 All that is out of Gray’s hands now.

“I definitely want to play pro football somewhere and I’m lucky to have two leagues where I can play football so it just improves my odds,” he said. “I’m going to be happy no matter what team I end up with. There would definitely be some advantages playing for the Bombers… I know a couple of guys on (the team) and hear good things so it would be nice.

“But I’ll be happy wherever football takes me.”

A Mechanical Engineering student with a 3.8 GPA, Gray had several of his Bisons teammates in attendance for his Pro Day. He said he hopes to watch some, not all, of the three-day NFL Draft in April – he has a previous engagement on April 28.

“I actually have an exam on the 28th. So up until the 28th I’ll be in my basement studying for my machine design exam,” said Gray. “If I get a phone call it might brighten up my day, but I still have to do well on that exam.”