I hope you have enjoyed all of the #CFL social media posts and videos from our visit today with members of the Canadian Navy! It was the second and final stop of our trip which took us to Marseille France where the H.M.C.S St. John’s was docked. The ship is massive and has over 200 Canadian Navy and Air Force aboard. H.M.C.S St. John’s  is on it’s way back out to sea very shortly so we only had a few hours to spend with the sailors but we made the most of it! After being greeted by a group of sailors we had a chance to tour a good portion of the ship; from the front of the ship where the captain handles a portion of the commands, the missile deck and the machinery control room. 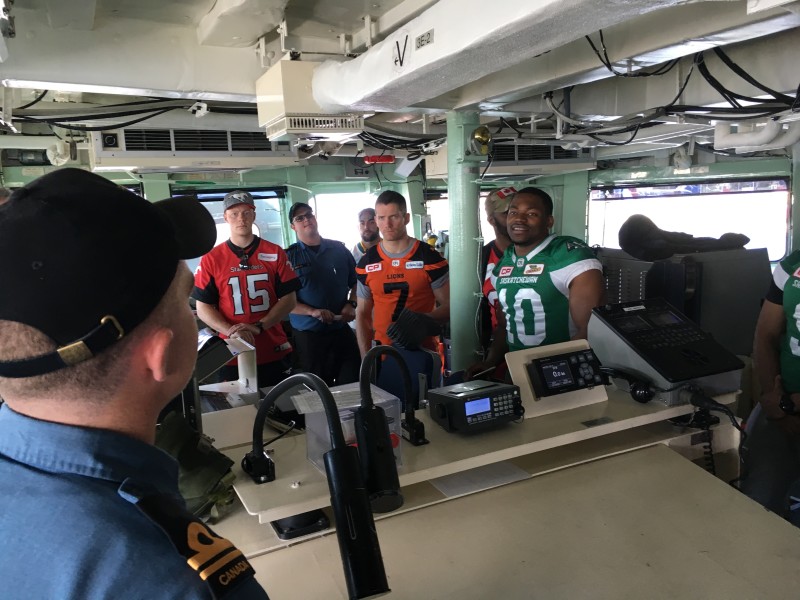 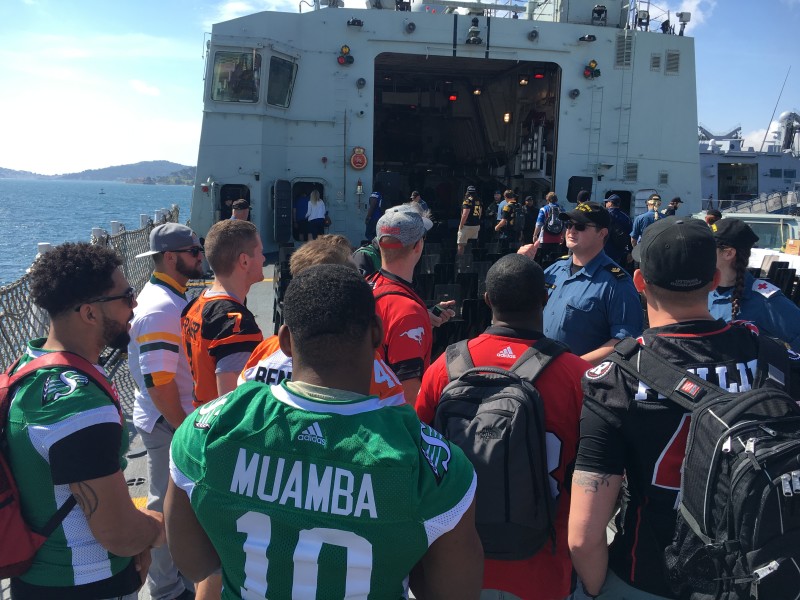 We were also able to go into the living quarters of the sailors which are, if you can believe it, even more claustrophobic than you can imagine. There are generally three bunks and each sailor gets one typical school-type locker to keep ALL of their belongings!

Much different than in Ukraine where the troops stuff was stacked and stuffed everywhere. I learned however that this makes perfect sense because on a ship things can get pretty rough. Each bed actually has a seat belt on it for when the seas are rough and I was told by multiple sailors that they sometimes wake up ‘hovering’ as they call it above their beds. I’m told they wake up in the middle of the night wondering why they woke up and realize the waters are rough and they are essentially bouncing up and down as they sleep….hovering does sound nicer. The whole locker situation made a lot of sense after that explanation – plus space is tight!

One of the coolest parts of the tour was the top secret we-couldn’t-bring-our-phones-in room where much of the above and below ship controls take place . In here the sailors are scanning for other radars, submarines etc. It was a lot to take in and extremely complicated stuff. All to say these ships are far more powerful, capable and…sneaky than I ever imagined.

From there we had the chance to eat lunch in the mess with the sailors. Lunch was awesome and as I mentioned in my last post an unique opportunity to experience something so natural under such bizarre circumstances. Meals have been the best time to actually get to know the members of the Armed Forces we have met during our trip and we’ve all taken advantage and split up across all the tables. 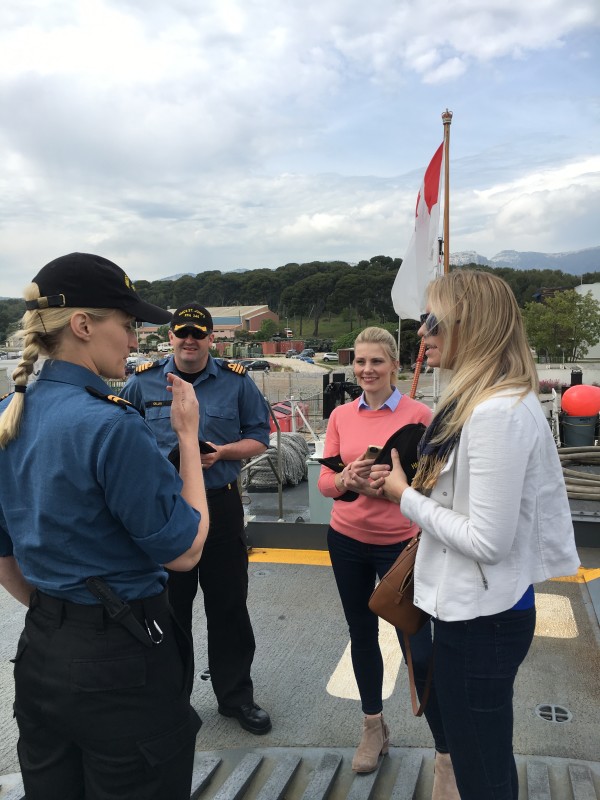 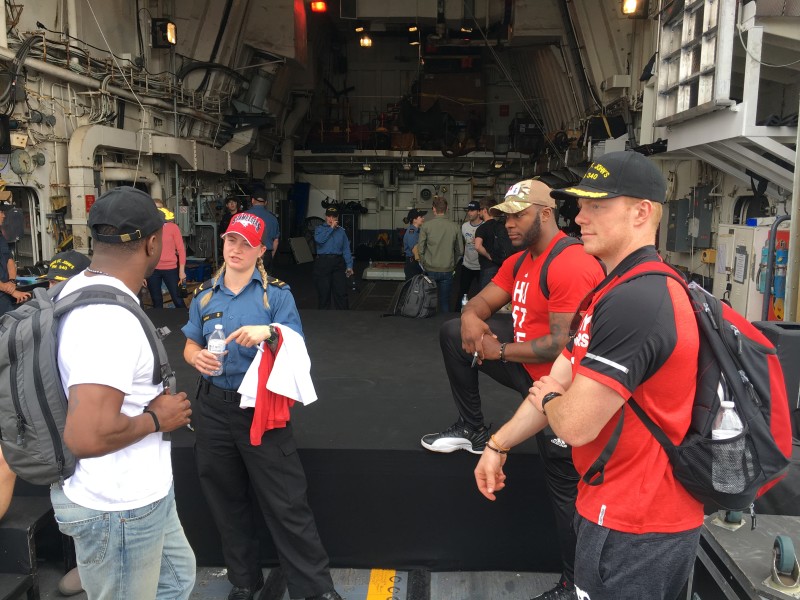 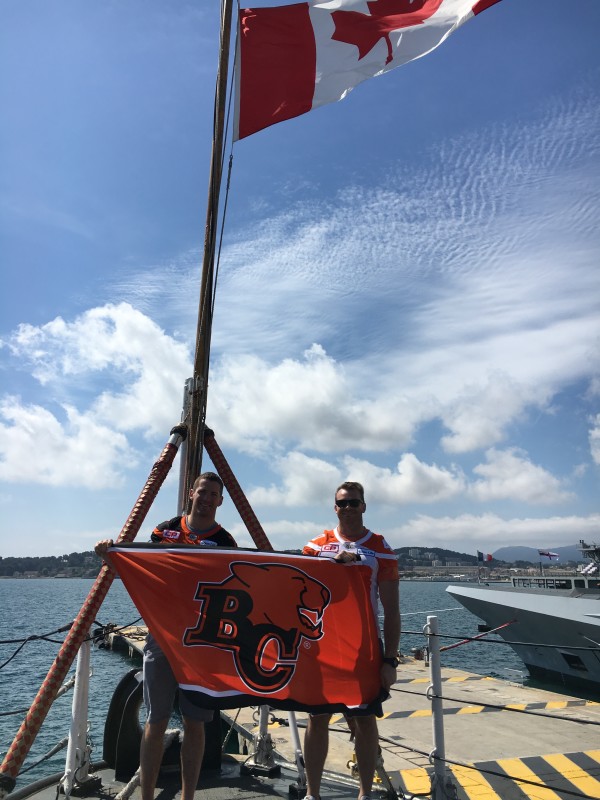 After that we had the privilege of hosting another show for the sailors, very similar to the show we did at the base in Ukraine. Players gave away a bunch of #CFL swag  that put some pretty major smiles on many faces. Dallas Smith and John Sheehan were incredible once again! John’s stuff is a little too…full of cursing to publish but here’s a clip from Dallas Smith!

Also Charleston Hughes got some time on the mic which was hilarious. After the show in Ukraine, Charleston, the joker he is kept singing this song (mainly just the chorus)c to Dallas…all the time. So Dallas gave him a shot and we were all hysterical.

Finally the sailors had a chance to get their photo taken with the Grey Cup – a major highlight for everyone! The crew on H.M.C.S St. John’s were so gracious with their time and gave us a ridiculously warm welcome. Added perk, we were given amazing hats which I am told are usually for captains so I will be hanging on to mine tightly! As with our last stop I was sure to pass along all of your well wishes and thanks. Today was the last stop for us and we will be returning home tomorrow. I cannot begin to express how powerful this trip has been for me and I know many of the players feel the same way. I look forward to writing one final post to give a few extra thoughts on our visit in the days to come. 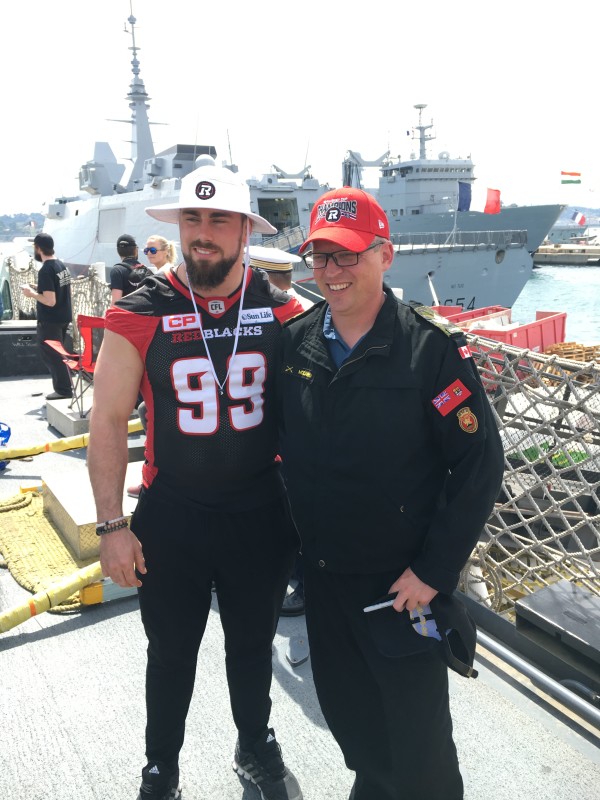 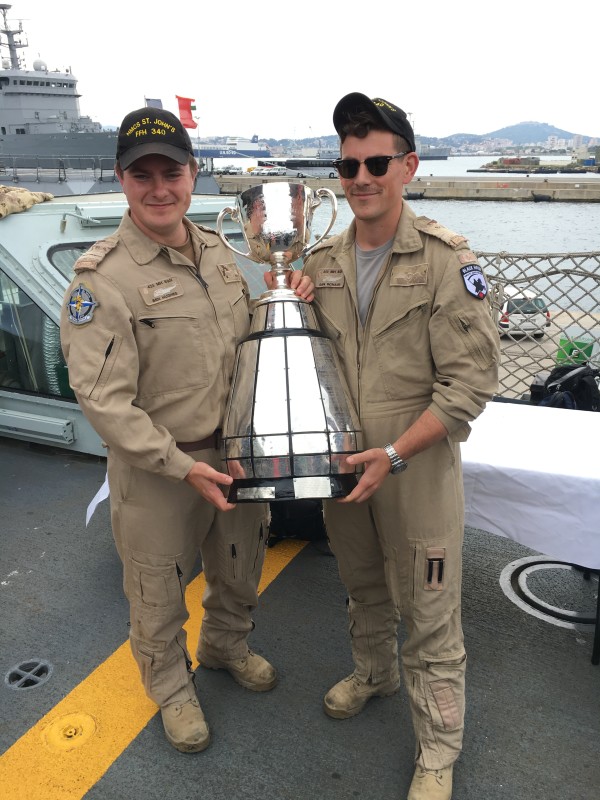 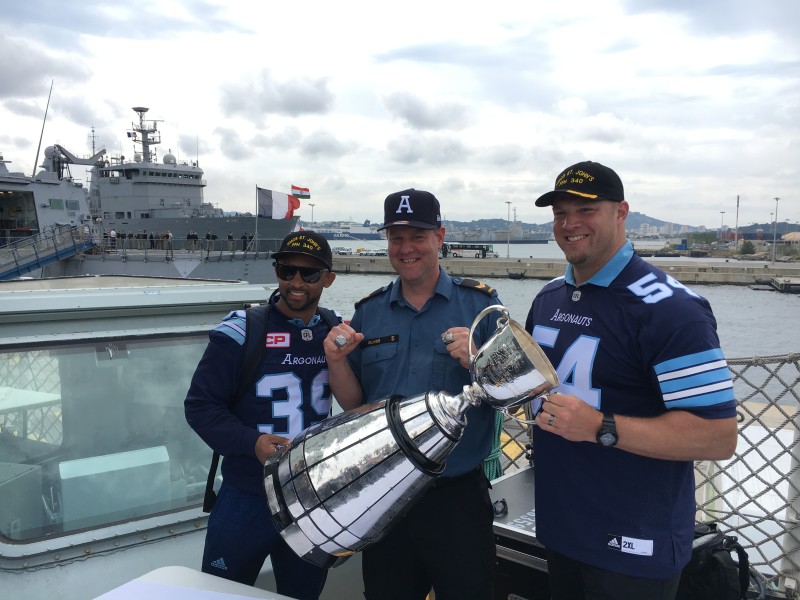 As usual please head over to @CFL for all of the photos and videos for today and if you’d like to see more from me @BrodieLawson.