More Than a Game: Welcome to Panda 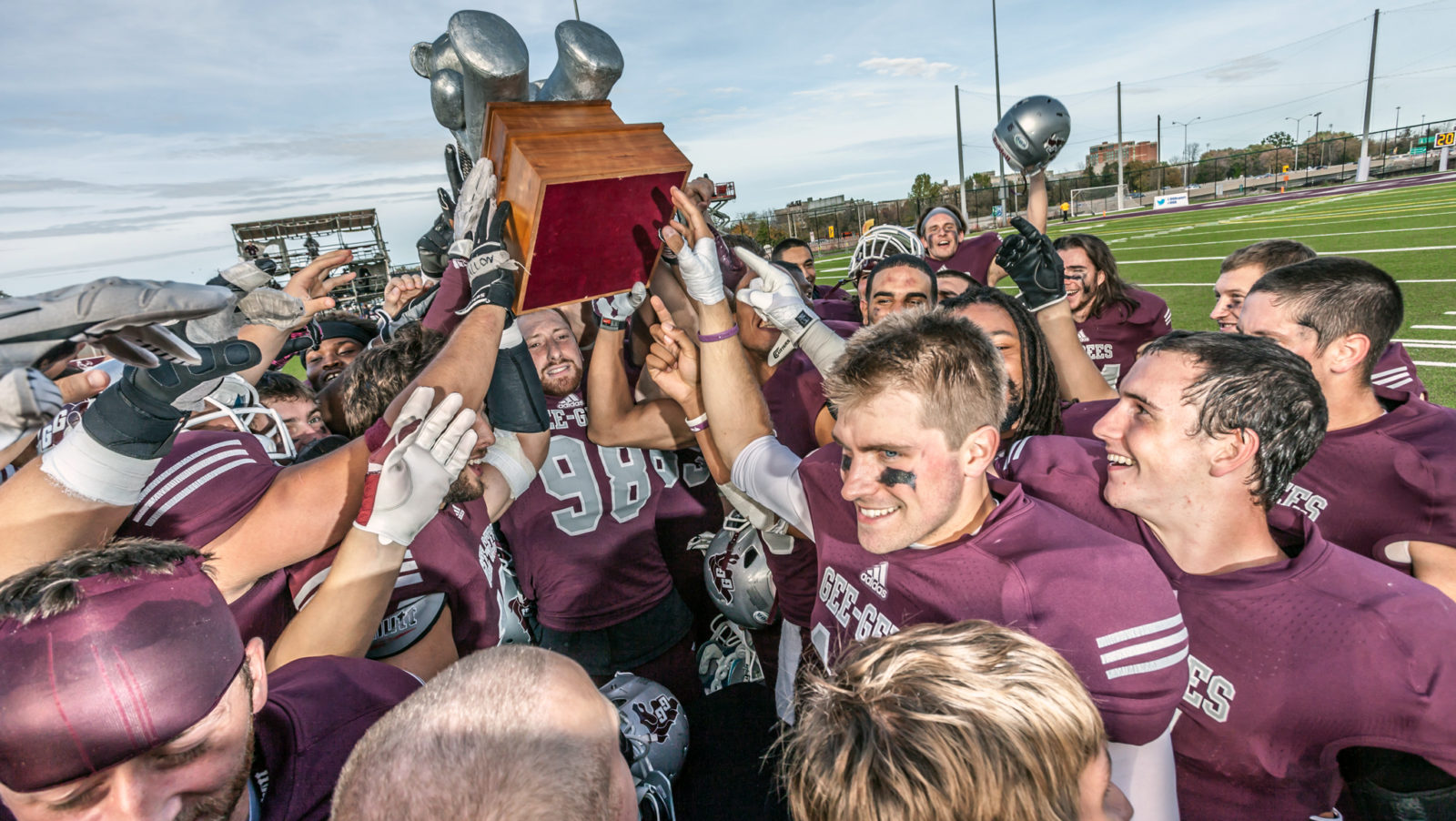 More Than a Game: Welcome to Panda

OTTAWA — They march in like members of a religious congregation at a service.

Thousands upon thousands of rowdy university students, decked out in black and garnet colours, descending upon the stadium along the banks of the Rideau Canal.

Some years, it’s warm. Others, fall’s unmistakeable chill sweeps across the stadium.

This is Panda Game: The annual pinnacle of Canada’s best university sports rivalry played out on the turf in front of 24,000-plus.

On Saturday, the Carleton Ravens and Ottawa Gee-Gees will meet at TD Place for its 49th edition.

“The moment from catching the ball to getting back to the locker room felt like three days…in the best way imaginable.” 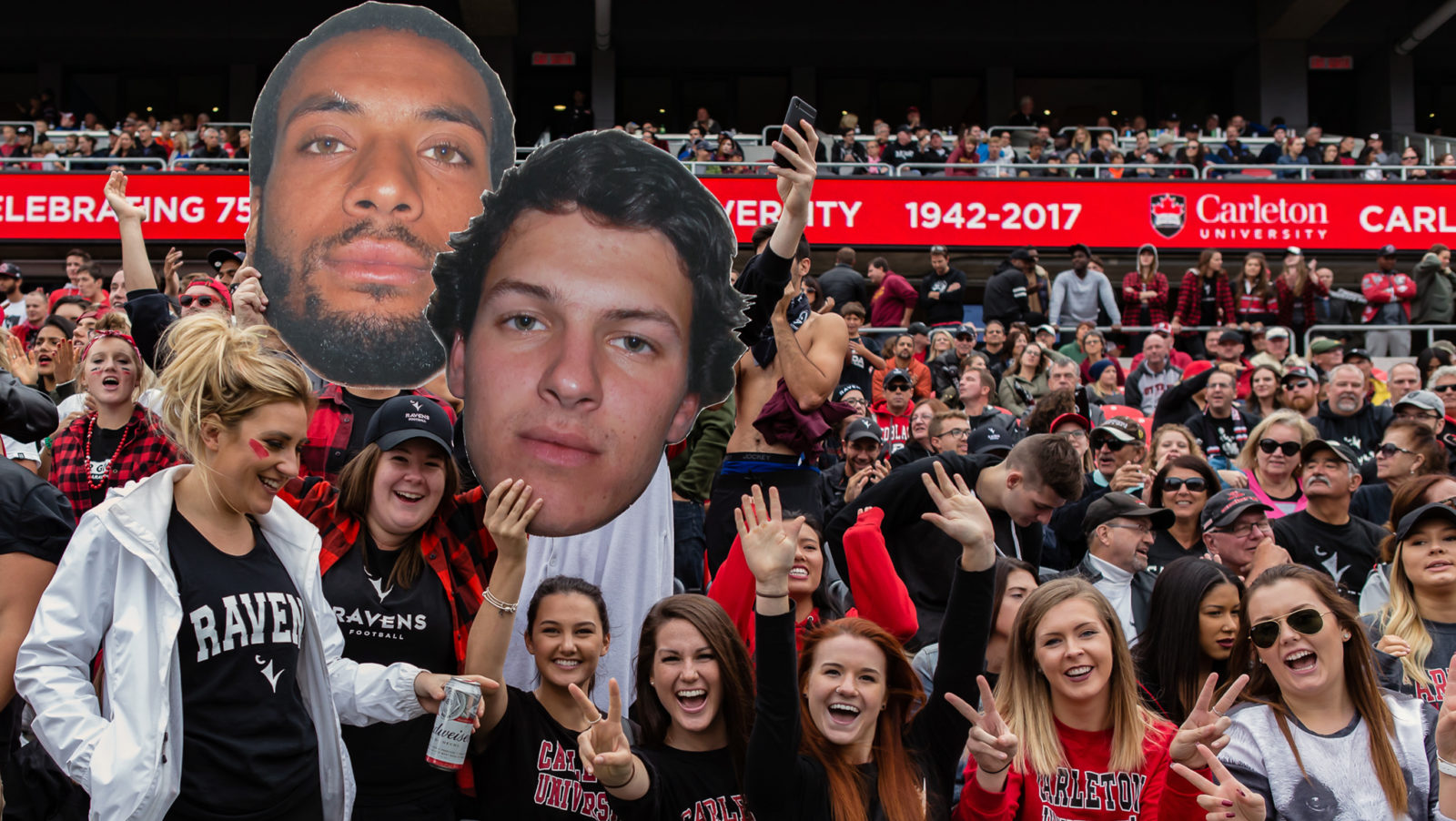 Nate Behar, whose cutout head is pictured above, is a Panda Game legend after his catch in 2014 (Photo: Carleton University Athletics)

Edmonton Eskimos receiver Nate Behar knows a thing or two about the culture of the modern-day Panda Game; on a cloudy day in October 2014, Behar — then the top receiver with the upstart Carleton football program — hauled in a game-winning Hail Mary touchdown which grabbed national headlines for its sheer ridiculousness and the field rush which ensued.

“It’s huge, there’s so many levels to (the rivalry),” Behar, now in his rookie season with the Esks, told CFL.ca. “A lot of the guys have grown up knowing each other, training together. It’s a big city but that not big.”

Behar’s last-second touchdown in 2014 started a chain effect which culminated in a sell-out crowd of 23,329 at last year’s event.

“In the moment I didn’t realize the impact, but in the hours and days after, I realized that it wasn’t a regular Saturday,” reflected Behar. “From that, you fast forward a year (or) two, and you feel how the finish and excitement of that game has snowballed and somehow the game has become even more (meaningful).”

Carleton — currently 1-3 — will put its three-game Panda streak that Behar and co. began in 2014 on the line this Saturday against the 4-1 Gee-Gees.

For the first time since that fateful October three years ago, the Ravens are firm underdogs.

“Talking to the guys, they’re going to relish the opportunity to come in and surprise people,” chuckled Behar. “Blowouts suck for pretty much everybody involved, (so) the closer the games are, the more fun they are.”

A history of triumph and tragedy

The history of the game, which was rebooted in 2013 alongside the return of Carleton’s football program, bears tales of triumph and tragedy.

Triumphs like that of the undefeated 1975 national-champion uOttawa team; tragedies like 1987’s grandstand collapse, which injured 30 and put one fan in a coma.

The names on those Gee-Gees teams of the mid-70s are remarkable: Neil Lumsden, who went on to collect 51 CFL touchdowns; Miles Gorrell, who played 19 seasons of pro football with five CFL teams; Head Coach Don Gilbert had previously played in the league as a defensive back.

“Panda is pretty unique,” laughs Jeff Avery, a receiver on those powerhouse uOttawa teams and now, decades after a seven-year CFL career, a well-known voice in the CFL alumni community. “The combination of local bragging rights, the huge crowds — it’s massively important to the two student bodies and the players on each team.”

The Gee-Gees celebrate with the Pedro the Panda, the infamous trophy awarded annually to the winner of the Panda Game (Photo: Richard A. Whittaker)

The return of ‘Panda’ in 2013 roughly coincided with the completion of the new stadium at Lansdowne — TD Place — and the return of CFL football to Ottawa. All three combined to once again make football king in the nation’s capital.

“Step one was the REDBLACKS bringing football back to the forefront here in town,” says Avery, a longtime colour commentator on Ottawa football radio broadcasts. “When Carleton brought their team back, (and did) such a first-class job building it from scratch, that built interest in Panda even more.”

The game’s high profile also allows homegrown talent to shine on a larger stage than a typical university game; whether it was Behar’s Hail Mary grab in 2014 or Calgary defensive back Tunde Adeleke‘s ridiculous 120-yard punt return in 2016, high-end CFL draft prospects seem to step up in the game.

“It’s a really good product that deserves more attention as far as people watching it and televising it,” says Avery. “You look at Tunde: when he was given the opportunity, he returned a few punts in Calgary and now is playing in the secondary. There’s more of those kids across the country.” 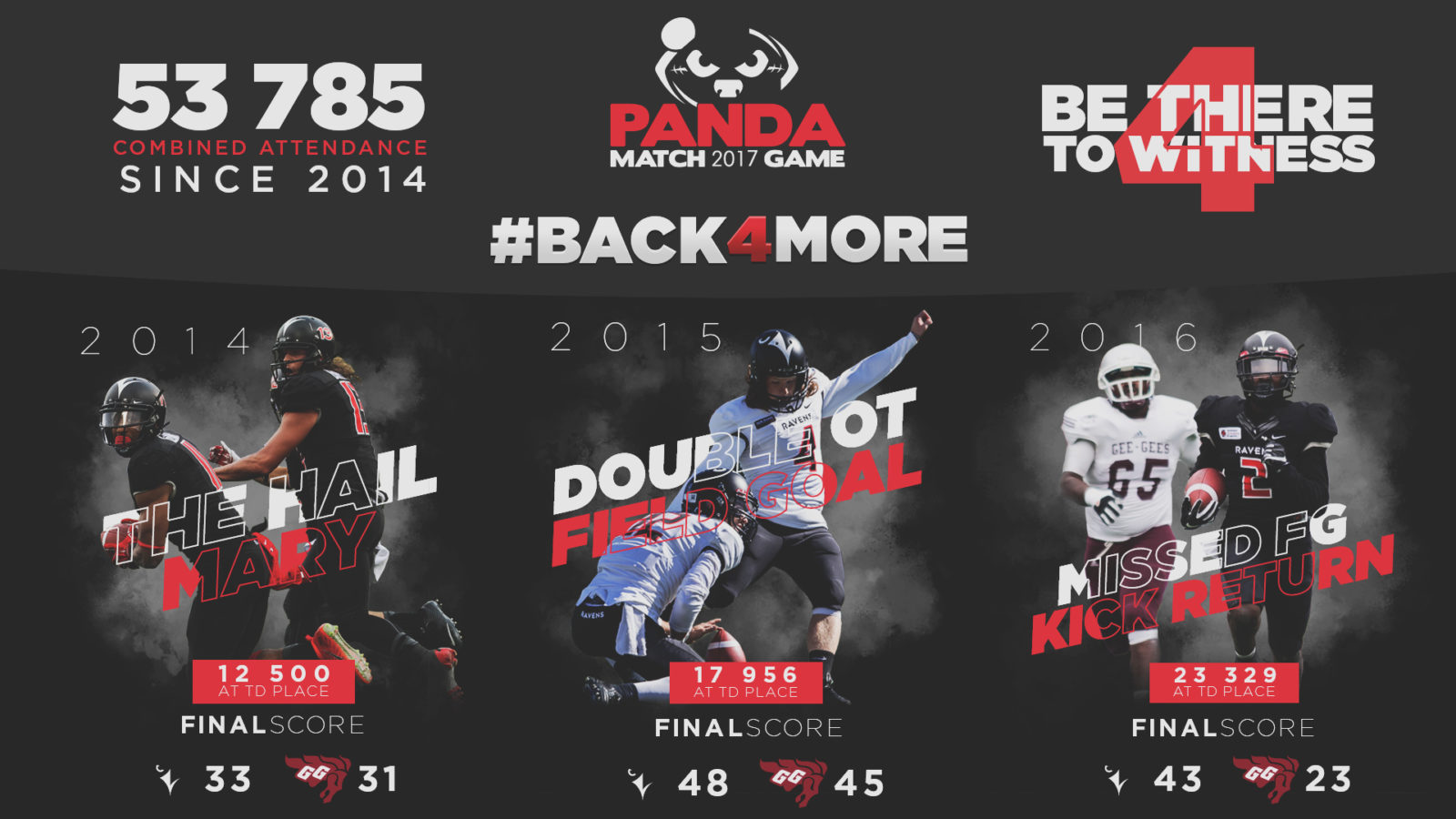 Attendance continues to grow at the annual Panda Game, from 12,500 in 2014 to 23,329 last season (Infographic provided by Carleton University)

The voice of the REDBLACKS on TSN 1200, he’s watched the game roar back to life in the national capital region in the span of a few short years.

“It’s gotten to the point now where people know this is a game that’s going to attract 20,000-plus, and they want to be a part of it,” explains Jakubec. “It’s managed to capture the hardcore football fan, but also people that just want to go and support their school, or just want to go and party — it’s hit all the checkmarks you want to hit to try and drive interest in university football.”

The long-time Ottawa radio man believes the game’s popularity is a sign of what could be possible for university football in Canada.

“We’re never going to see a time when university sports in this country will be at the same level as the NCAA,” admits Jakubec, “but it sure would be nice, even just baby steps, where every home game for Carleton or Ottawa was a 4- or 5,000 person sellout.”

That process begins with getting people in the door at major events like Panda.

“All it takes is one person to go to one game and say ‘hey, I enjoyed that, I’m going to go to more games,'” says Jakubec. “Hopefully they want to come back for more games — football, basketball, hockey, whatever — (and) that school spirit starts to grow from this one game.” 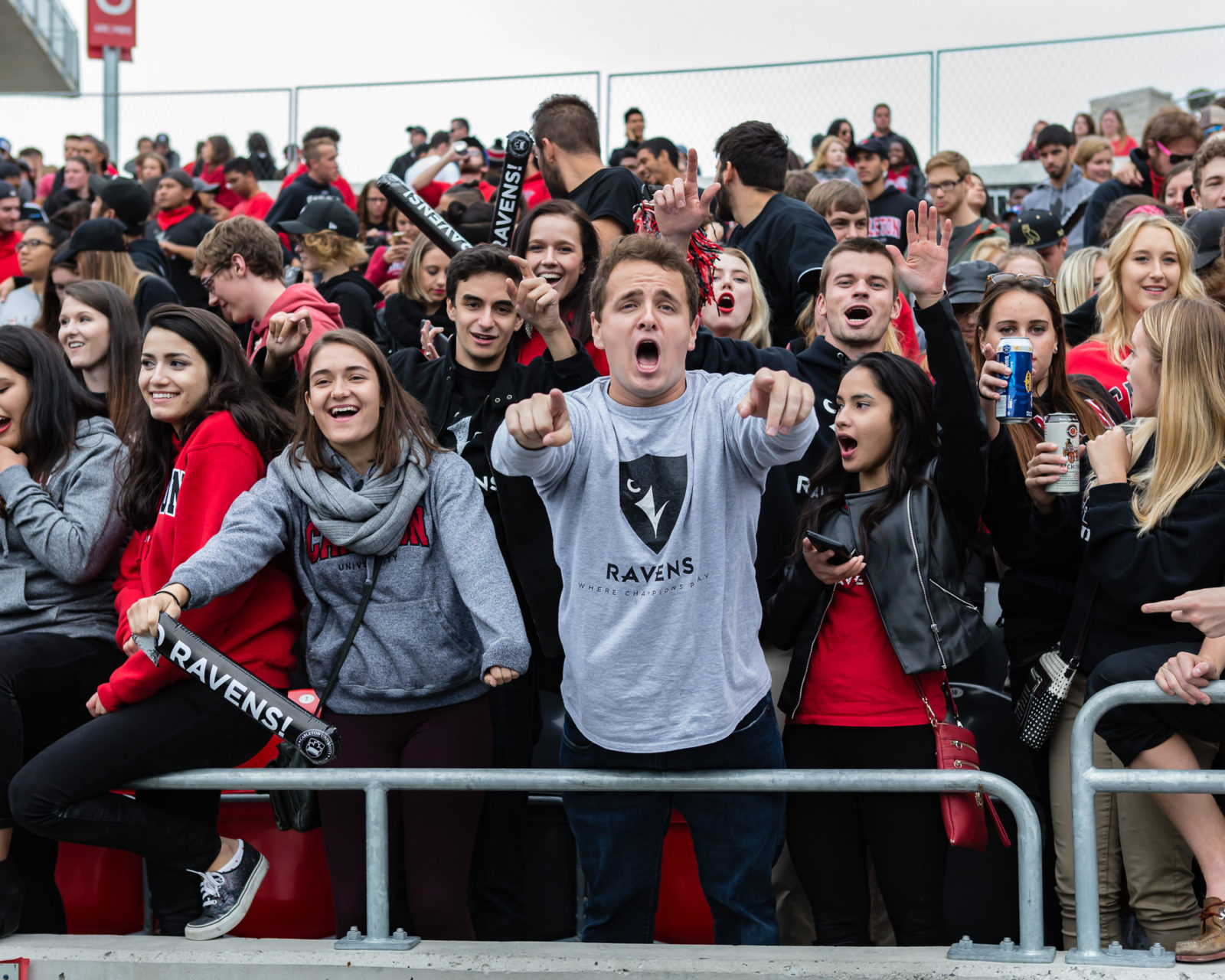 Carleton and Ottawa students have made the Panda Game an annual must-attend event for football in the city (Photo: Carleton University)

You can be sure they will be there, in droves, this Saturday.

Making the pilgrimage to the bright lights and rowdy atmosphere of the stadium on Bank Street.

They will come from everywhere: first-year students from residence dorms, families from across Ontario and Quebec, and alumni from across the nation.

They will fill the stands and be part of an atmosphere that is unmatched anywhere else in the country at this level.

The garnet-clad Gee-Gees, chasing down a playoff spot and shaken to their core by the tragic passing of teammate Loic Kayembe last weekend, will surge onto the turf in search of their first Panda win since the game moved to TD Place.

The Ravens, donning their all-white uniforms, will sprint onto the gridiron with every intention of engineering an upset and keeping their slim playoff hopes alive.

Every player on the field will know that they’re capable of turning the tide of thousands of voices on one play, etching themselves into Ottawa football history in the process — just as Behar and co. have done before them.