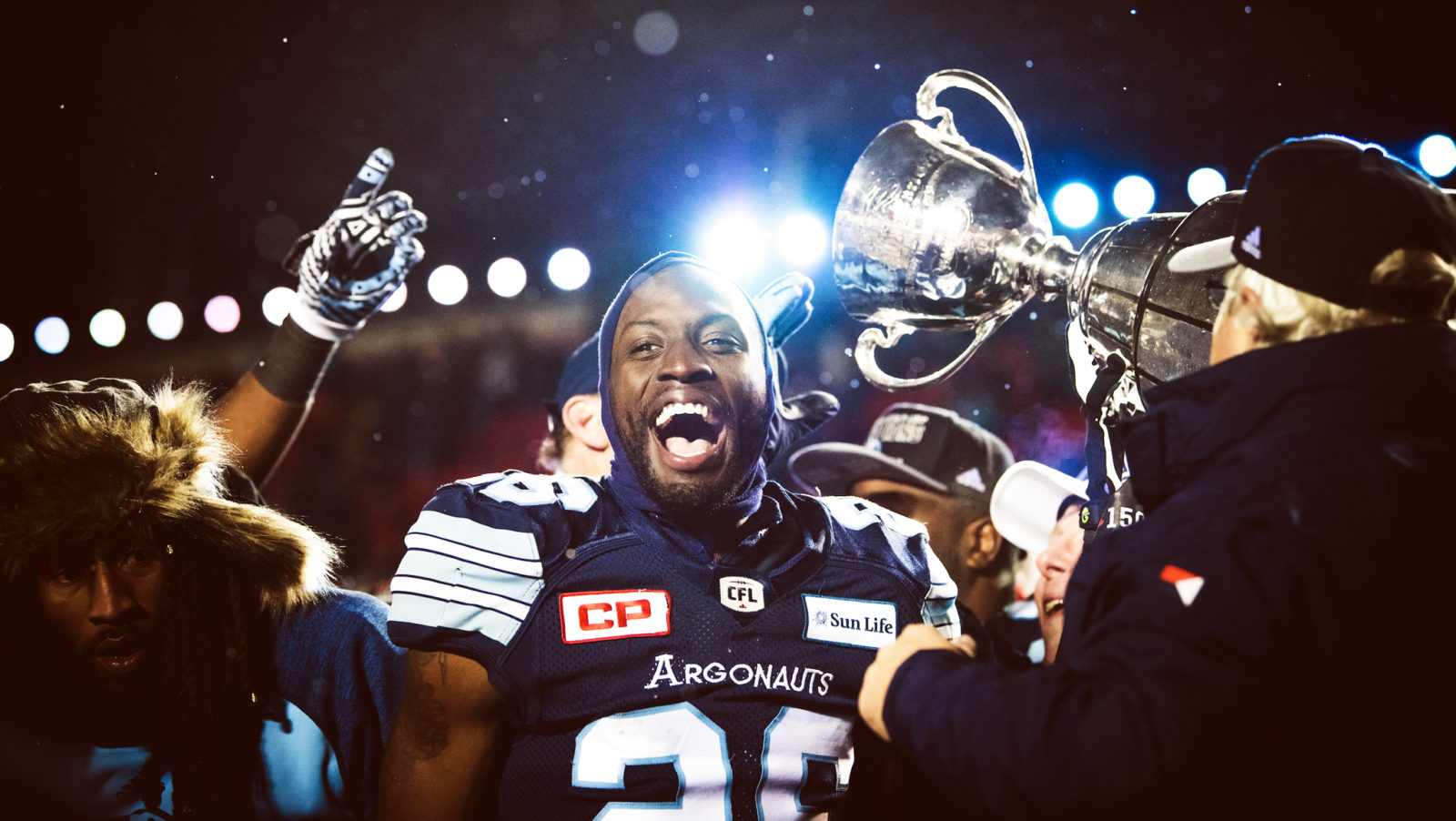 You can argue over which was the bigger play in the Toronto Argonauts’ 27-24 victory over the Calgary Stampeders in the 105th Grey Cup presented by Shaw.

What is crystal clear, however, is that the Argos’ defence came up very, very large when it was most needed, leading the charge in stunning the Stamps, who suffered a second straight crushing championship game loss.

Turnovers came for the Argos, which was a flip of the script in this barn burner of a finish, after it seemed they would rue the fact that two other possible turnovers did not come their way, earlier in the game.

The protagonists in this story just happen to be two players who were unwanted just a short time ago. Black, in so many ways the ultimate Argo warrior, had been released by the team he loves back at the beginning of August, a victim of roster restrictions who would return just a week later and cap his season’s journey with the biggest play of his life.

“It means so much to so many guys,” said Black, before taking the time to name pretty much every man he calls a teammate. “I’m just so happy for so many guys on this team.”

Vaughn, on the other hand, was out of football until the Hamilton Ticats signed him in 2016. He didn’t fare well and ended the season on the practice roster. Hamilton signed him to a new contract during free agency, but then released him during training camp and he was promptly signed by the Argos.

“I thank everybody, every team that didn’t want me,” said a giddy Vaughn, bellowing in a flurry of double blue confetti, just after the Argos had accepted The Cup. “Didn’t want me to be a part of their team.”

With the Argos trailing the Stamps by a score of 24-16, and just under five minutes remaining to play Calgary quarterback Bo Levi Mitchell soft-tossed a swing pass to receiver Kamar Jorden at about the nine-yard line. Argos’ safety Jermaine Gabriel made a stab at him and missed, but did not give up on the play, hustling to his feet and diving at Jorden as teammates Cleyon Laing and Rico Murray swarmed.

It was Gabriel who knocked the ball out, though he didn’t realize it at the time, nor did he realize it in the celebratory aftermath of the game. He wasn’t trying to strip Jorden of the ball.

“I was just thinking ‘let’s stop ‘em from scoring,’ to tell you the truth,” said Gabriel “And everything just worked out.”

“I knew Bo Levi wasn’t gonna tackle me,” said Vaughn who’d scooped the loose ball at the one yard line and taken off towards the Calgary end zone. The Stampeders’ quarterback was really the only man who could have stopped him. “There was no way,” said Vaughn. “No way.”

Gabriel, lying on the ground, heard the crowd and twisted around to see Vaughn booking it down the sideline.

“First I was like ‘damn my arm hurts,’” said Gabriel, whose body, it seems, was trying to tell him that he had indeed knocked the football loose. “I look up and we were going the other way with it. I knew Cash had it and if Cash had the ball, it was going to the house.”

Gabriel was on the scene for the other big play, the end zone interception by Black. He was covering Mitchell’s intended target, Marken Michel, and doing a pretty good job of it. Black read the play too, and started drifting over.

“When the ball was up in the air I knew I had a shot at it,” said Black, the 32-year-old native of Toronto who also iced a regular season game for the Argos when he sacked Edmonton quarterback Mike Reilly, back in September.

“I’m thinkin’ that they’re gonna take a shot at the end zone. I saw the receiver come up the field, saw we had coverage. I got over the top and was able to make a play.”

You couldn’t have written it up any better for the nine-year veteran, who was often asked about his release, this week, and steadfastly refused to offer anything other than gratitude that he’d been asked to return.

“This moment is so much bigger than me. This is about this team, about how resilient this team is, how hard every man has fought, overcome so much. I’m just a piece of that puzzle,” Black said.

Vaughn’s heroics, as well as Black’s, were stark contrasts to the earlier flow of the game, when the Argonauts were unable to take advantage of Calgary bobbles. Special teams ace Llevi Noel couldn’t cover a punt return fumble by Roy Finch. Corner Akwasi Owusu-Ansah forced receiver Juwan Brescacin to cough up the ball, only to have Brescacin climb over him to recover it.

At that point, it seemed that the story for the Argos on this night would be one of a loss and of the opportunities that weren’t pounced on.

In the end, the karma changed and Black and Vaughn took advantage.

As Vaughn said, in spiritual fashion: