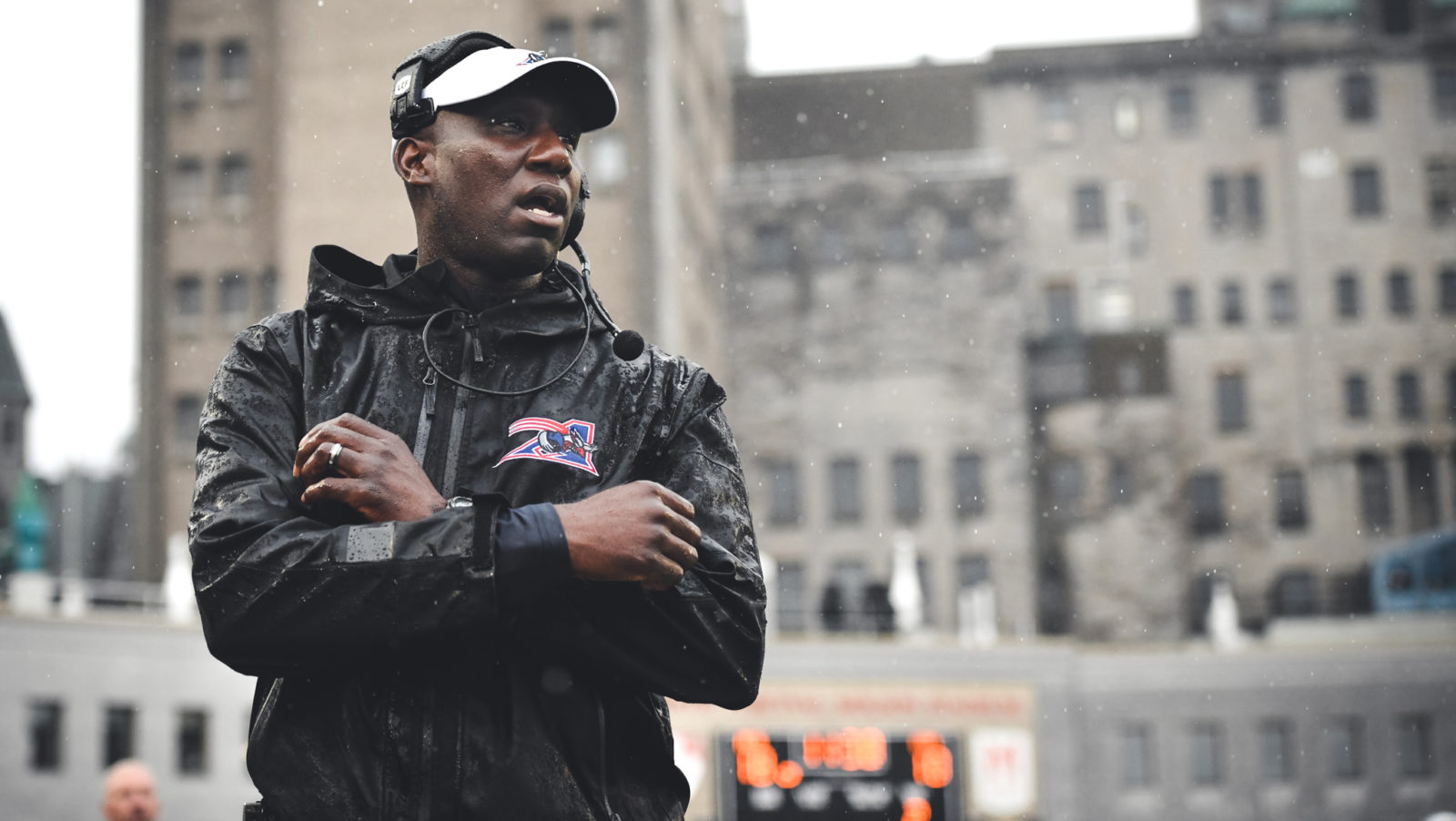 With the start of a brand new year, there is hope for all nine CFL teams. The 2018 season is just months away and we’ve got New Year’s resolutions for everyone to start the year off on a positive note. 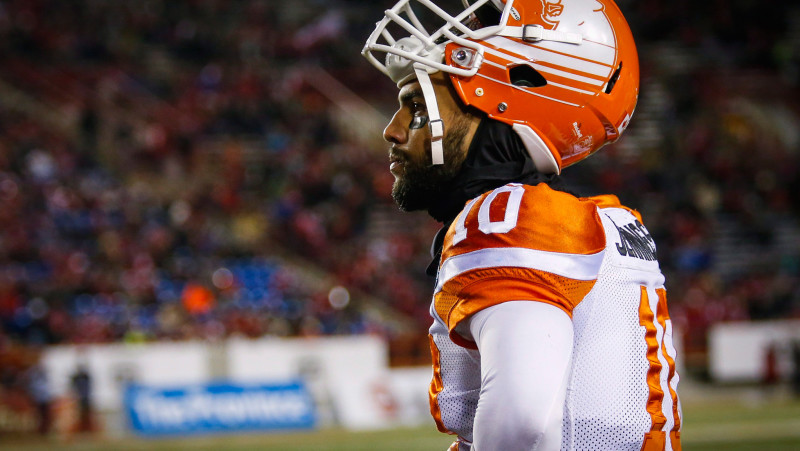 Jonathon Jennings and co. will be looking for a bounce-back performance in 2018 (The Canadian Press)

I think the Lions believed a little too much of their hype coming into the 2017 season, and there was a lot of it. Plenty of people, including me, had BC pegged as Grey Cup contenders, but the team fell well short of those high expectations. Both internally and externally, lower expectations should be a good thing for the Lions in 2018.

There’s nothing wrong with flying under the radar and catching opponents by surprise. With a little less hoopla surrounding the team heading into the season, I’m curious if BC can live up to the potential we know is there.

Jonathon Jennings is still a promising quarterback and he has impressive talent around him, too. Jeremiah Johnson finished fourth in the league in rushing yards, while Bryan Burnham and Emmanel Arceneaux made up the CFL’s top receiving duo in 2017. With some talented playmakers defensively, this team has what it takes to be a really good team. Perhaps tempered expectations this year can help them Lions be much more the sum of their parts.

How do you go about an off-season when the goal is to win one more game? That’s a question the Stamps are asking for a second-straight winter after another heartbreaking Grey Cup loss spoiled a dominant regular season. The problem is, there really isn’t an easy answer to the question posed above. And, more importantly, that’s probably not the riddle Calgary should be trying to solve.

I say that because that line of thinking assumes the Stampeders will be right back in the 2018 edition of the Grey Cup. While no one has touched them through the last two regular seasons, assuming dominance like that is foolhardy. Credit Calgary, because they didn’t let that type of thinking creep in at any point last season, and they’ll have to guard against that once again this year.

What the Stamps can do is use November’s crushing loss serve as motivation once again. There’s no doubt Calgary had their 2016 Grey Cup loss to Ottawa in the back of their mind all season long, so there’s certainly something to be said about using both of their recent defeats as fuel. Motivation is good, because assuming a third straight title shot would very likely end in disappointment. 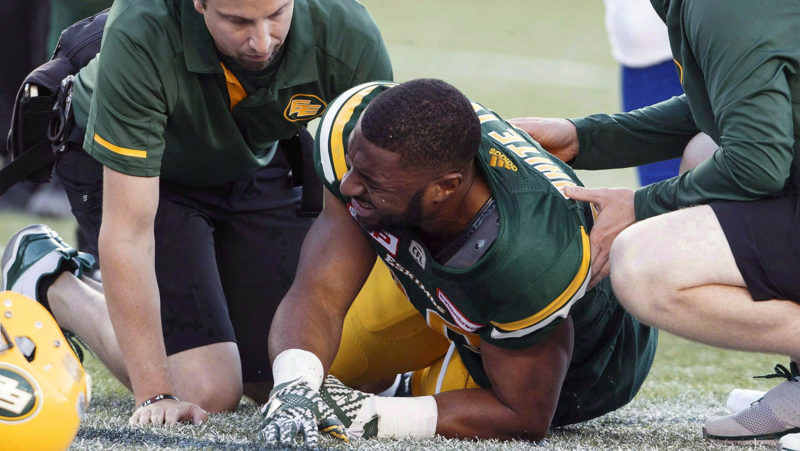 The Esks gave the aforementioned Stampeders a run for their money in last season’s Western Final, which is pretty impressive knowing the adversity they faced. So for a new year, Edmonton needs to figure out some way to stay healthier than they were in 2017 (as if there is some magic elixir to ensure that).

Before their season was even three weeks old, the Eskimos had lost three key contributors for the season to set a very frustrating tone. Cory Greenwood went down in training camp before fellow linebacker J.C. Sherritt was lost in Week 1. Finally, tailback John White suffered his second torn Achilles in three years in Edmonton’s next week to complete a miserable run.

Nonetheless, Edmonton was a good team last season and look to be setup very nicely in 2018. Mike Reilly is the reigning MOP, C.J. Gable is locked up after solidifying things offensively upon his late arrival, and the Esks are stacked in important areas like receiver and defensive line. A little more luck on the injury front this year could be exactly what the doctor ordered…excuse the pun.

I know the Ticats finished last season with a 6-4 record after an 0-8 start, but that doesn’t guarantee a solid start to the 2018 campaign. Head coach June Jones had some decent success upon taking over for Labour Day weekend, but now he’s running his first training camp. Even though the Tiger-Cats finished strong in 2017, they might need a few weeks to find their groove once again this season.

Similarly, quarterback Jeremiah Masoli will most likely be a number one quarterback coming out of training camp for the first time as a professional. Masoli looked better than we’ve ever seen him in his ten starts down the stretch, but again, there’s a difference between being the guy for half a season and being the guy full time. Some patience might be required with Masoli, too.

Finally, fans in Hamilton are going to need a patient approach when evaluating Johnny Manziel, if indeed he ends up in black and yellow. Manziel isn’t going to be shoot the lights out right away if he’s going to succeed in the CFL. The Ticats are going to need to bring him along slowly behind Masoli, which makes this the definition of a long game project. 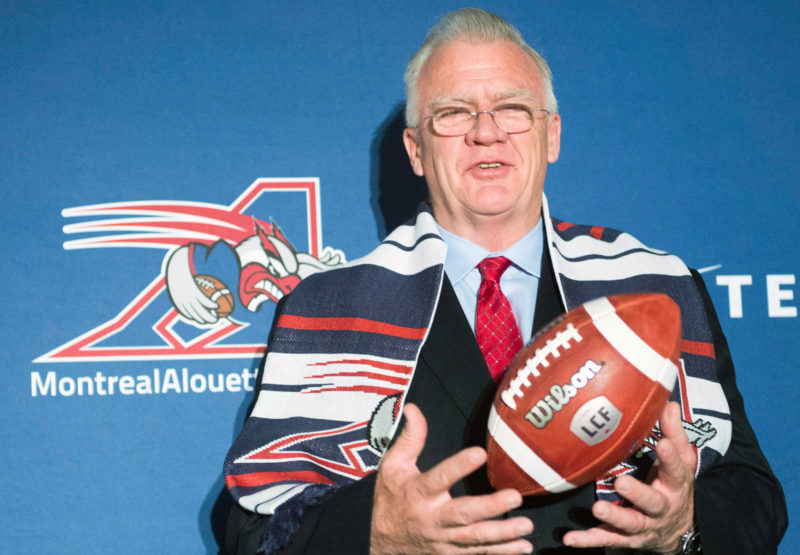 Will Mike Sherman help steady the ship in Montreal in 2018? (The Canadian Press)

2017 was a turbulent year for the Als. Unfortunately, that has been all too common over the last five seasons in Montreal. Since Marc Trestman left for Chicago at the end of the 2012 season, the Alouettes have gone through six coaches before getting to Mike Sherman for the coming year. Second-year general manager Kavis Reed needs to make sure that isn’t the norm any longer.

It isn’t just at coach where Montreal has struggled for any semblance of stability. Since Anthony Calvillo’s retirement, the team hasn’t been able to find a quarterback they can trust for any extended stretch of time. The Als have given the ball to, among others, Troy Smith, Jonathan Crompton, Rakeem Cato, and Darian Durant, and not one has been able to truly be the guy.

What must be frustrating for Montreal’s faithful is how stable things were for so long. For more than a decade, Calvillo, Ben Cahoon, and Scott Flory were mainstay cornerstones, while Trestman and Don Matthews held down coaching jobs for long periods of time. The start of something similar needs to be the goal in 2018 and beyond.

Ottawa has been one of the CFL’s most active teams in locking up players prior to free agency opening next month. The REDBLACKS re-signed receiver Brad Sinopoli almost immediately after the end of the season to set the tone, while quarterback Trevor Harris wasn’t that far behind. That doesn’t mean their work is done, though.

Ottawa still has a few key players they need to get under contract as they look for a fourth straight playoff appearance. Diontae Spencer, who had a spectacular first year with the REDBLACKS after signing as a free agent last winter, leads that list. With 922 yards and six touchdowns, Spencer made a huge impact at receiver, and he was just as important returning punts and kicks.

Running back William Powell is a crucial re-signing too, as he finished just nine yards back of the CFL’s rushing title in 2017 despite playing in just 12 games. And don’t forget about Alex Mateas, either; the Canadian offensive lineman proved invaluable to the REDBLACKS last year excelling at both guard and centre. 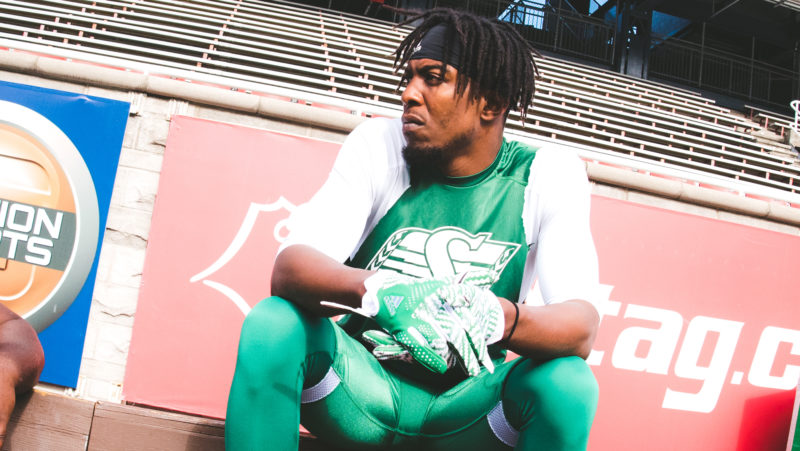 Duron Carter is known for being loud on and off the field but does that change this season to just on it? (Johany Jutras/CFL.ca)

2017 was a very loud year in Riderville. Sometimes it was good and sometimes it wasn’t, but you can’t deny how much noise the Riders made this past year. News items emanating from Regina weren’t hard to come by this past year: from Vince Young to Duron Carter, Chris Jones fines to quarterback juggling. A slightly more quiet 2018 might do Saskatchewan good.

In a lot of ways, the Riders have already done the bulk of their off-season talking thanks to this week’s Zach Collaros acquisition. After cycling through multiple quarterbacks over the last two seasons, Collaros has the potential to solidify things in Saskatchewan at the most important position.

Of course, where the Riders do want to make lots of noise is on the field. This group has a lot going for it and came agonizingly close to competing for the Grey Cup a couple months ago. If Collaros can get things back on track, Sask has the chance of being very loud where it counts. There’s a better chance of that happening with less extraneous noise off the field.

TORONTO ARGONAUTS: NO REST FOR THE WICKED

In their first year at the helm, general manager Jim Popp and head coach Marc Trestman made it look pretty easy in Toronto. Despite not joining their new team until late February, this dynamic duo got their feet under them quickly, suffered through some early-season adversity, and ended up winning the 105th Grey Cup. Those two just need to remember things don’t always play out like a Hollywood classic (as if either one would ever think that for one second).

The main point here is the Argos have some work to do this off-season. Popp needs to make decisions on key free agents like linebacker Bear Woods and receivers DeVier Posey and S.J. Green, among others. One key move has been made, though, as Popp pulled the trigger on December’s James Franklin trade with the Eskimos.

That’s where Trestman comes in. Toronto’s head coach is looking at one of two challenges in 2018. Behind door number one, he’d have to finesse a situation with Franklin and Ricky Ray at quarterback if the latter elects to come back. Conversely, Trestman would be tasked with elevating Franklin in his first year as a starter if Ray decides to hang them up.

Regardless, fans of the Argos can rest pretty easy with Popp and Trestman at the helm, especially after all that was accomplished in 2017. 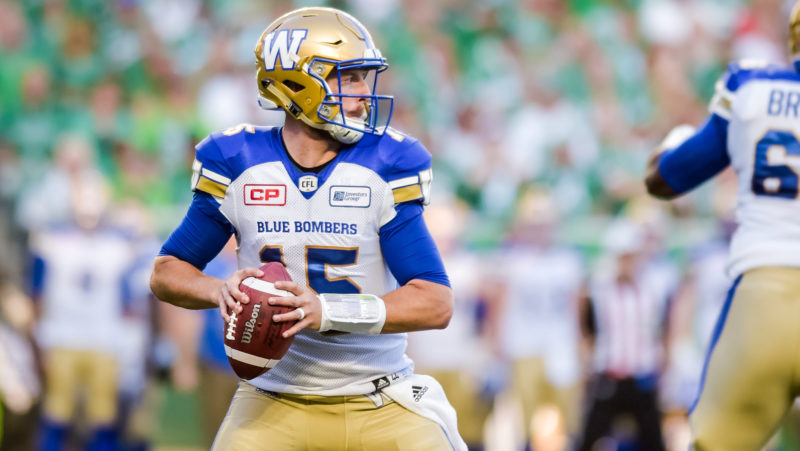 Matt Nichols and his offence are ready to roll in 2018, but what about on the other side of the ball? (Matt Smith/CFL.ca)

The last two years have been really promising for the Bombers. 2016 saw them return to the playoffs for the first time in five seasons, which was followed up by a better regular season and a second-straight post-season appearance. Now, with a pair of Western Semi-Final losses under their belt, Winnipeg needs to get over the hump.

The good news is I don’t think general manager Kyle Walters needs to go crazy this off-season. Instead, I think clearing that next hurdle will come from internal progression from a core group that looks to be relatively in tact for 2018, at least offensively.

Quarterback Matt Nichols, left tackle Stanley Bryant, running back Andrew Harris, and receiver Weston Dressler lead the pack of important playmakers returning this season. Where Walters will have to be busy will be on the other side of the ball, with key players like T.J. Heath, Chris Randle, and Kevin Fogg all set for free agency.

If Walters takes care of his own house, though, I think the Bombers have what it takes to take the next step. This core group has two playoff disappointments fresh in their mind, so they know what it takes to get the job done.