After 11 season in the CFL (all with the Calgary Stampeders), FB Rob Cote has decided to call it a career.

The Calgary native made it official earlier today:

After 11 years in the #CFL, @calstampeders FB @robcote26 has called it a career.

As a full back, one creates running lanes for their RB.

Cote paved the way for many RBs & one in particular wanted to say thank you: 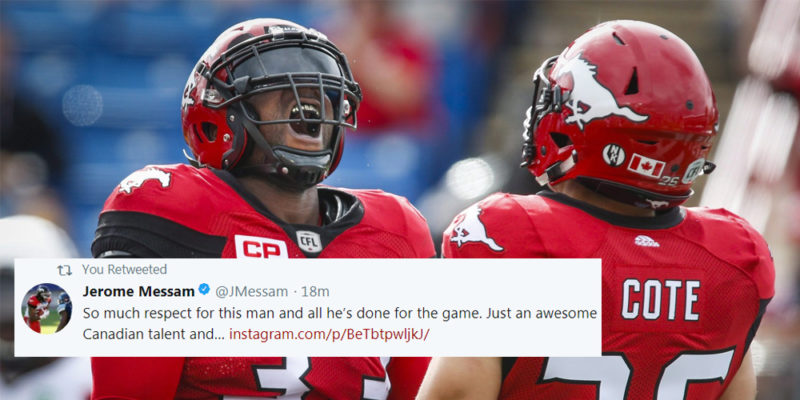 Not bad being one of the favourite teammates to the all-time receptions leader:

Congrats @robcote26 u were and will always be one of my favorite teammates. U were that little piece that made everything better. Some don't know it exists and others over look it until its broken. U were very valuable to the team's success in Ur career. #Respect #GradeAFamilyToo

Congrats to @robcote26 aka “The Weapon” on a great career. He did all the little things that don’t show up on the stat sheet. A true professional, team first player, and all around good guy. Glad I had the chance to strap it up with you for 6 years. pic.twitter.com/tP3G8oxdH9

Was clearly spoiled with this man keeping the launch point safe. The man does everything the right way. It was an honor 👊 https://t.co/ulAUX0vM9e

Without a doubt one of the most humble,professional,team oriented, classiest, hard working dudes I’ve ever had the pleasure to strap it up with wish there was a bunch guys like him in a locker room but they don’t make many like him..Congrats on great career brother! @robcote26

The man himself wanted to say thank you to the city that is essentially an extension of himself.

It has been an unbelievable ride and I thank everyone who has been a part of it. I will carry these memories with me forever, but now it's time for the next kid we've never heard of to make their dreams come true. On to the next chapter…