The third and final edition of the Central Scouting Bureau rankings are here and just like last year, there are five players rated in the top 20 who were not previously ranked in the December list.

There is a heavy dose of NCAA talent in the top five but plenty of movement including previously number one ranked offensive lineman David Knevel of Nebraska being bumped back to fifth while Bowling Green blocker Ryan Hunter can now call the top ranking home.

Here is a full look at prospect movement over the three Scouting Bureau rankings since September: 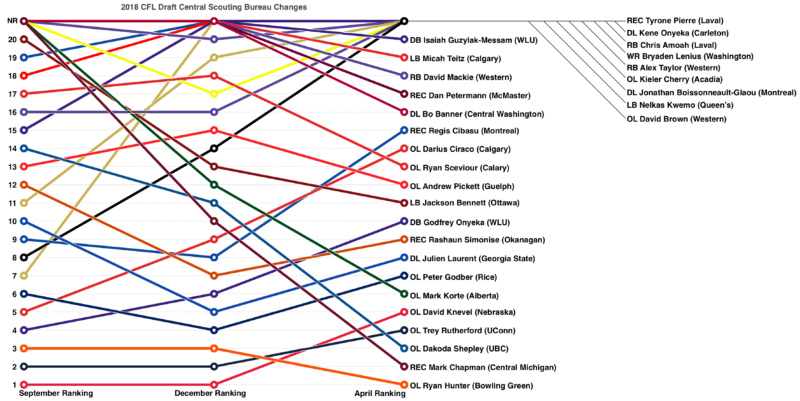 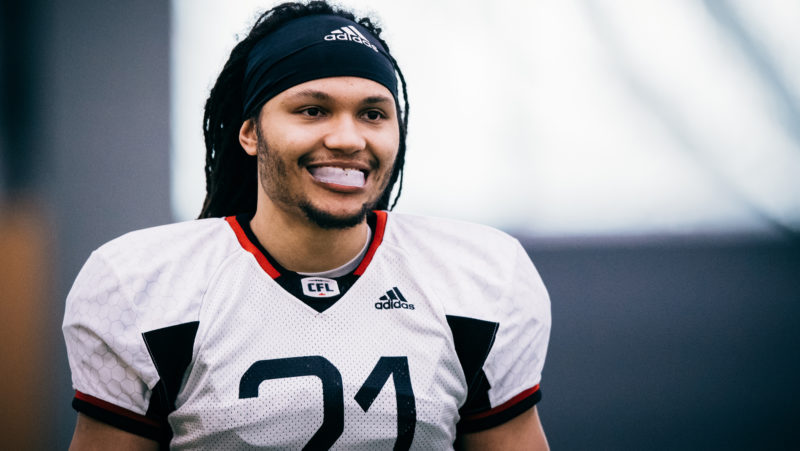 Guzylak-Messam not being ranked earlier could be the effect of standing in Laurier teammate Godfrey Onyeka’s perceived shadow but make no mistake, he deserves every ounce of praise he gets as a thrashing, physically built defensive back.

Last year Calgary Dinos defensive end Connor McGough went unranked until April before finding a home at twenty and having a productive rookie season in Hamilton. Could Guzylak-Messam – a Hamilton native – follow a similar path? 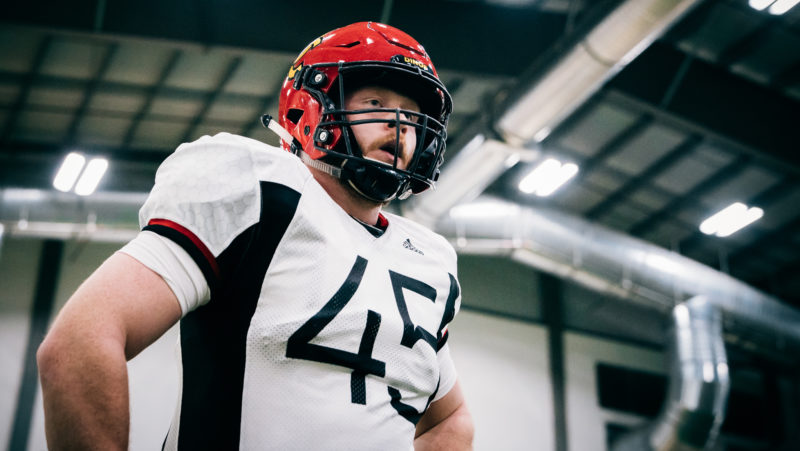 Teitiz ran better than expected by many scouts at the national combine in Winnipeg and has a well established resume to support his placement on the Scouting Bureau’s final rankings.

Previously thought of as a solid football player without CFL caliber athleticism. the combine only helped Teitz. 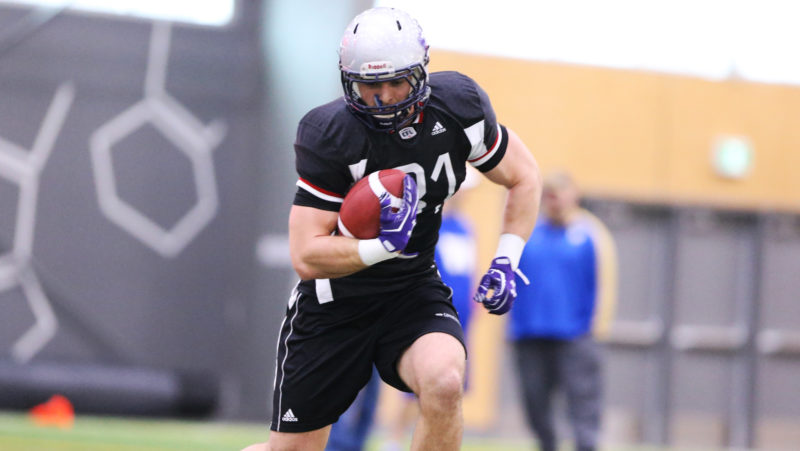 Mackie replaces teammate Alex Taylor in the final rankings and with good reason. The CFL draft is rarely about skill position players dominating quickly and more about players who can add value to a roster.

Mackie has great size and combines advanced level blocking knowledge gained from the Mustangs ground game coaching with experience as a long snapper. Whoever gets him this May will quickly be better off for it in a variety of ways that rarely serve as highlight of the night. 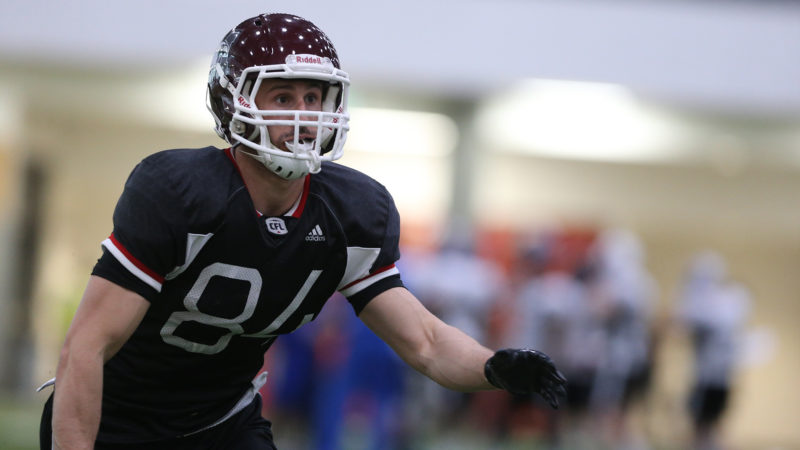 Petermann opened many eyes at the national combine. Based on his college career accolades and on field skill set he likely deserves to be ranked higher in the final list but not being ranked previously could have held the bureau back from raising him above more established prospects from previous lists. 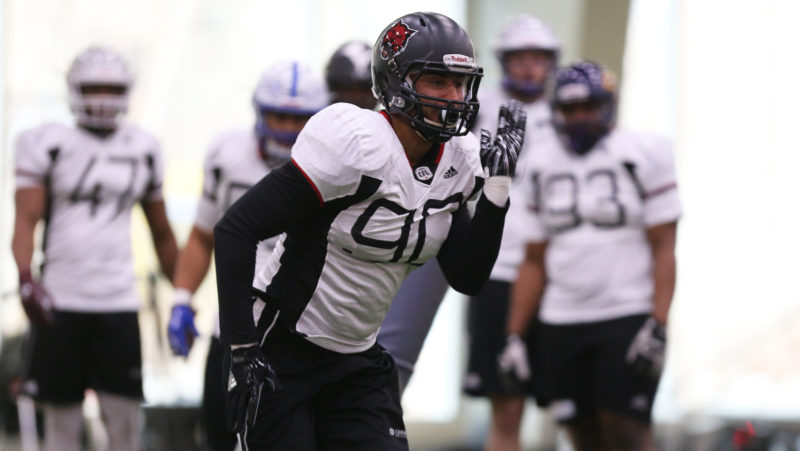 Banner was easily the most effective pass rusher in one-on-ones at the CFL’s National Scouting Combine and shows promise as a true defensive lineman if his body grows from talented college player to professional anchor.

I see Banner as a rotational defensive lineman for a team like Saskatchewan or Edmonton quickly while being asked to contribute on special teams. 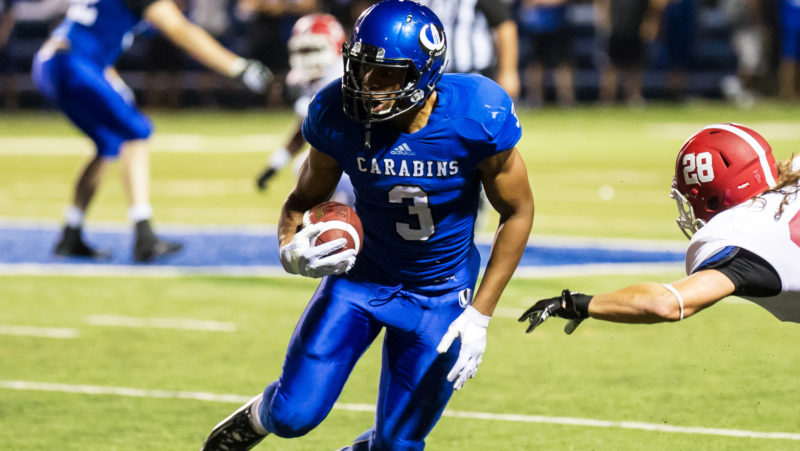 Cibasu did not run the forty yard dash time he wanted at a Montreal Carabins pro day and chose not to attend the National Scouting Combine. Those two factors likely hurt the Carabins receiver through the winter rankings to where we stand today.

I believe Cibasu would have upped his draft ranking with an appearance in Winnipeg since he would have been viewed favourably when standing side by side with many other receiving prospects. 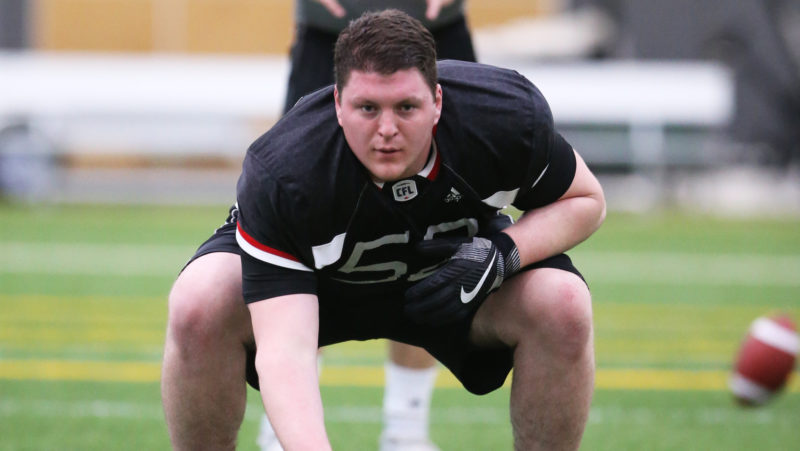 Ciraco has slowly been pushed out of the top ten by other prospects who continue to rank. This is likely due to relatively average testing numbers and the lack of recency bias on film.

In season, Ciraco was an anchor for the Dinos line and not being able to watch him do what he does best – block people – since November hurts his number. Lucky for Darius the rankings don’t mean anything after you’re drafted. 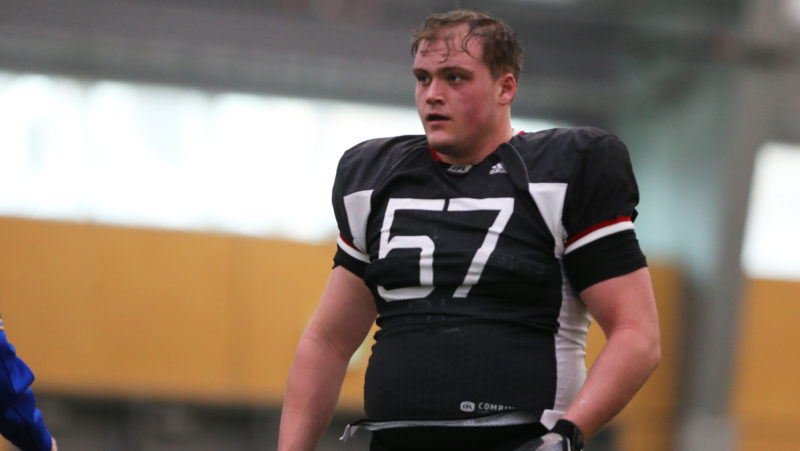 Contrary to his teammate Ciraco, Sceviour has slowly risen towards a single-digit ranking thanks to his smooth movement tests and general demeanour at the national combine.

I’d be surprised if Sceviour is still available by the time we reach the third round of the draft. 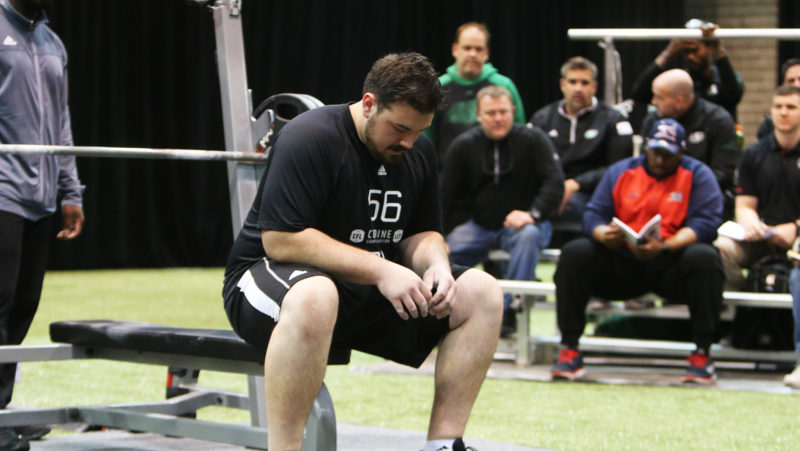 Pickett, similar to Sceviour, continues to win the race by playing the role of tortoise and not hare. Slow and steady is the name of the game for the Guelph Gryphons big man who lent a physical edge to a Gryphons line that dearly needed it through the fall. 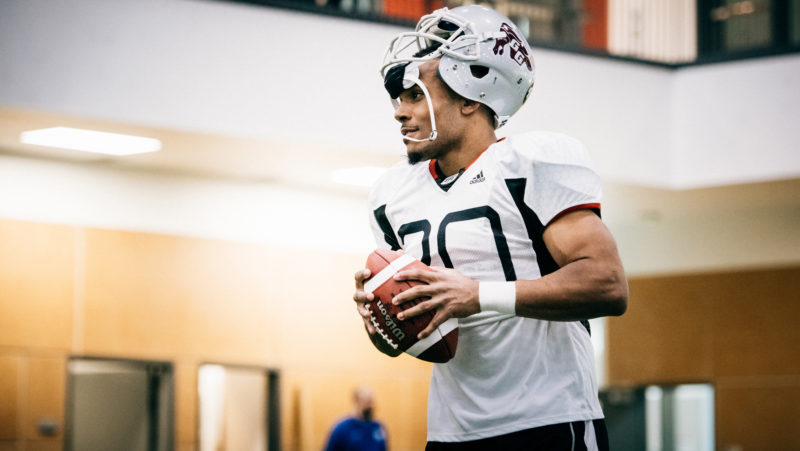 What can’t this guy do? Jackson Bennett seemed to be on the field forever at the national combine while competing against receivers and running backs with the linebackers and defensive backs.

This also gave him the chance to put twice the amount of special teams reps on film for CFL scouts which can only help them better understand his worth as a player. 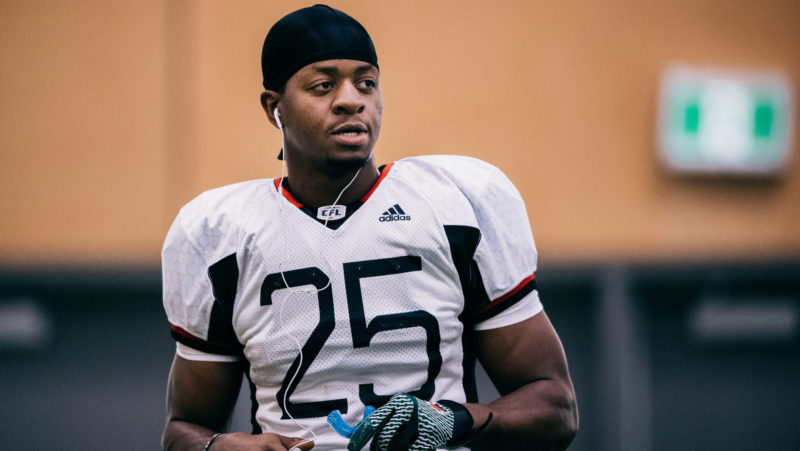 Onyeka has experienced a fate similar to former Golden Hawks defensive end and Laurier teammate Kwaku Boateng this winter. Perhaps overrated to begin, Onyeka has slid backwards in the eye of the scouting bureau but remains one of the most pro ready players in the 2018 draft despite the likely positional change he will make to linebacker at the next level depending on the intentions of the team that drafts him. 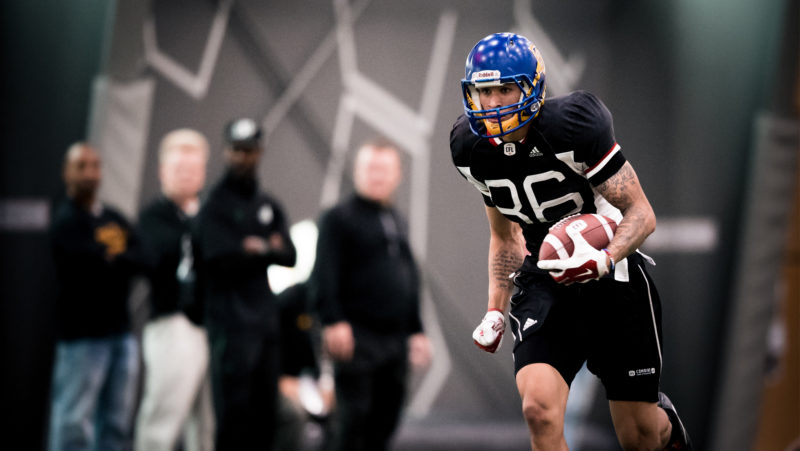 Simonise has jumped up and down the rankings since September and moves backwards two spots in the final pre-draft list. Simonise didn’t run away with the crown of testing hero like many thought he would and ran inferior routes to Central Michigan’s Mark Chapman. In a side-by-side combine setting can be damaging to perception but there is no doubt Simonise is amongst the names with the most potential to develop in this draft. 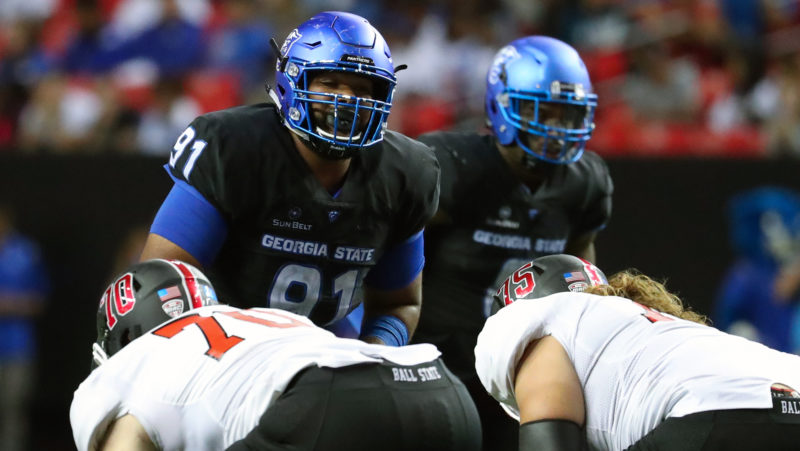 Laurent’s resume and pure size precedes him despite participating in limited action at the combine. He is a skilled lineman as capable of pushing the pocket as he is getting a hand up to knock away pass attempts. 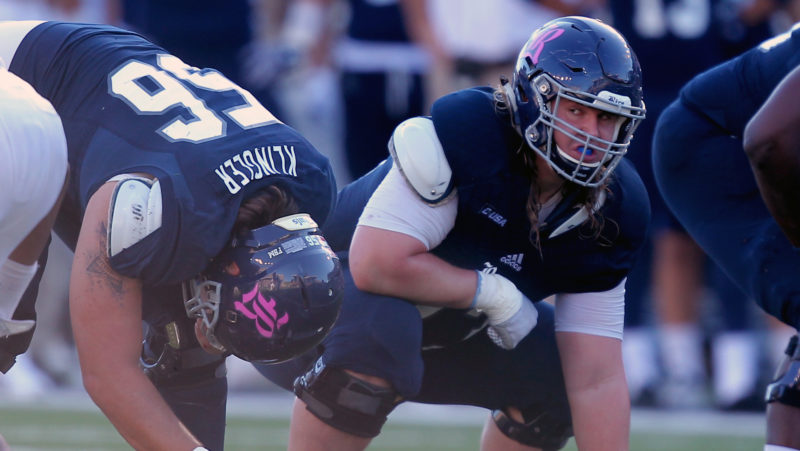 Godber did not participate in the National Scouting Combine despite attending the event in Winnipeg which could have hurt his bureau ranking slightly. With that being said his in-game ability is evident without question and his pro day at Rice showed he needs to stay in the top ten of final player rankings. 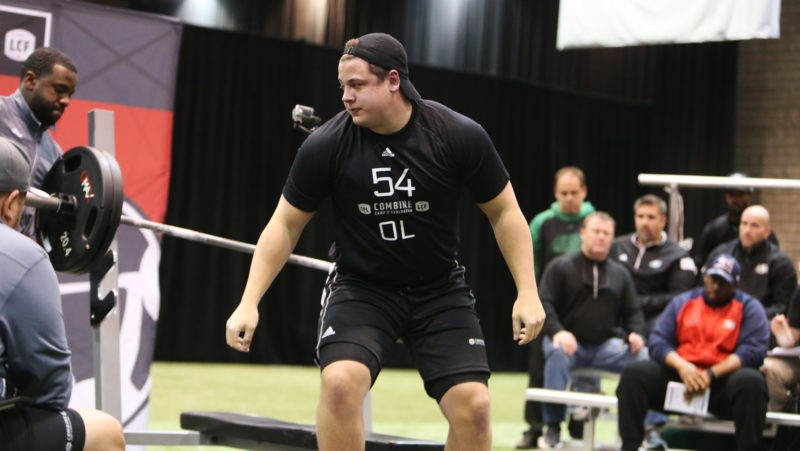 Korte came from off the radar in September to get wide ranging accolades through the 2017 Alberta Golden Bears season. After an East-West Shrine Bowl appearance in the United States alongside Montreal receiver Regis Cibasu, Korte is now ready to become a first round pick and add size to a national lineman group. 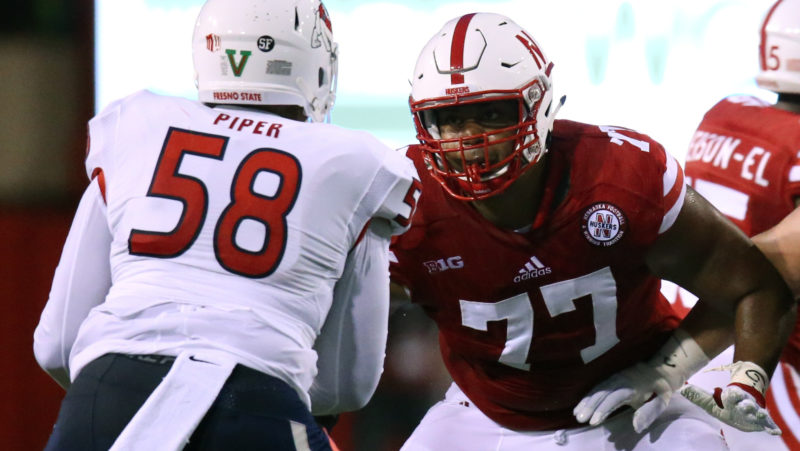 Knevel has the skill set of a tackle but a body type that can kick inside in the CFL game if required. He is rumoured to have a priority free agent profile from NFL scouts meaning within minutes of the NFL draft he could be signed by a team. 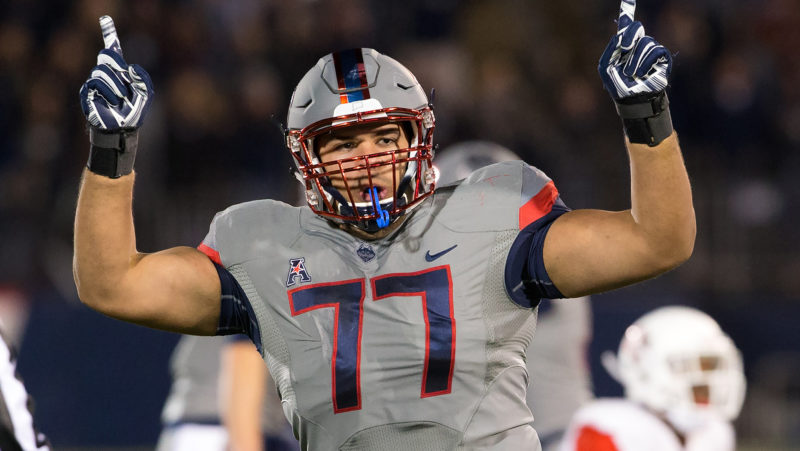 Similar to Knevel, Rutherford has been shuffled backwards to make room for a couple of standouts who attended the CFL national combine. Rutherford has served as a guard, tackle and fullback at UConn. Sounds like a great toy for the Calgary Stampeders and Dave Dickenson to add to an ever younger treasure chest of offensive talent. 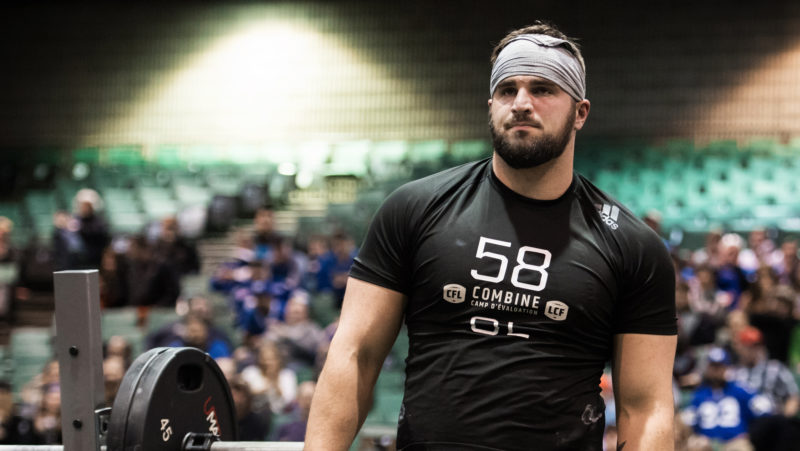 Shepley earned every bit of his rise in the Scouting Bureau Rankings since September. He tested considerably better than many counterparts and has the type of game tape scouts see and want to coach. 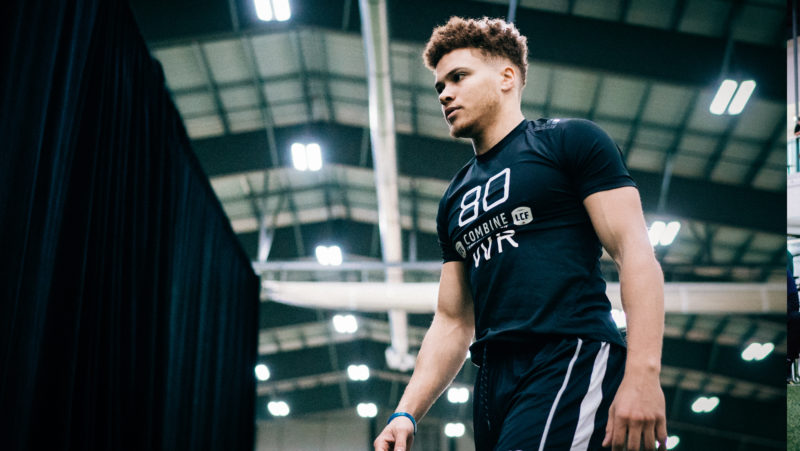 From off the board to one of the drafts hottest commodities, Mark Chapman continues to impress even after the combine with memories of his smooth route running and quick cuts lingering in decision makers minds. 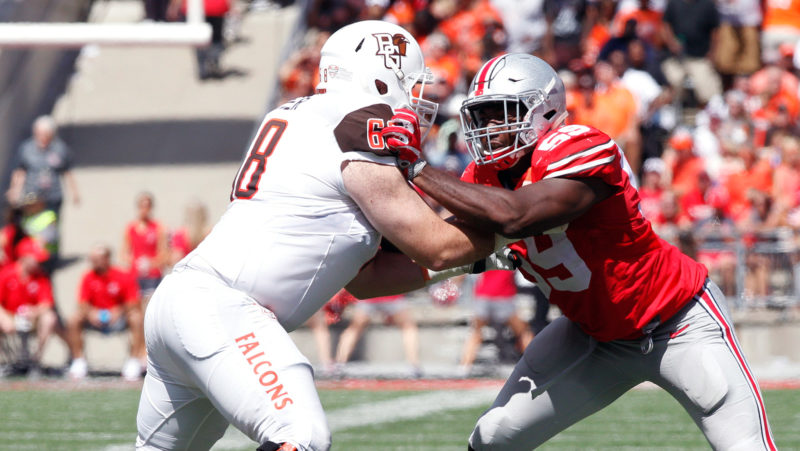 Hunter put up exceptional numbers at the Bowling Green Falcons pro day and has the size to contribute immediately to a CFL roster. Both good reasons for his steady rise to the pinnacle of the Central Scouting Bureau rankings.

Pierre failed to make much of an impact at the national combine after running a 4.64 and not participating in other tests.

Despite what I thought was a combine which solidified his position as a solid top two or three round selection Onyeka has fallen well back of brother Godfrey in the scouting bureau standings. Further proof that specialty positions such as pass rusher continue to struggle translating from U SPORTS to the CFL in evaluators eyes.

The devaluation of the running back position continues as Christopher Amoah gets bumped alongside Laval teammate Tyrone Pierre.

Despite flashing in pass routes at the national combine Taylor didn’t test all that well and struggled in special teams drills.

A bit surprised to see Kwemo fall to the wayside here above the top twenty players. He did not run as well in Winnipeg as some thought and could be stuck between standup defensive end and undersized defensive end in evaluation.