TORONTO — It took only a year for Boston Rowe to go from being the hunted to all of a sudden hunting.

The Calgary Dinos linebacker, eligible for the 2018 CFL Draft on May 3, was originally recruited to the university as a quarterback before switching to the defensive side of the ball following his redshirt freshman season.

Now Rowe is on the other side of the chase.

“I’ve played every position except for O-line and cornerback,” said Rowe, who had two tackles and a fumble recovery in his first season, playing the final two regular season games and both playoff contests.

The change provided the chance to get onto the football field and out of the shadow of an already-stacked quarterback depth chart, one that already included Andrew Buckley, Eric Dzwilewski and Jimmy Underdahl. 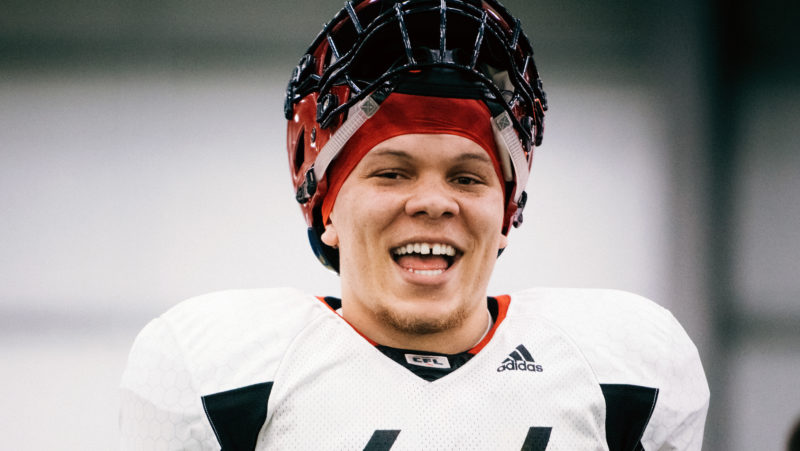 Boston Rowe was born in Edmonton but moved to Calgary at two years old (Johany Jutras/CFL.ca)

Rowe says his experience as a signal-caller on offence has helped him see the field better as a linebacker.

“I actually enjoy that part of it, it helps me now because you get to see from different perspectives how the game’s played,” he said.

Rowe performed at the CFL Scouting Combine presented by adidas last month in Winnipeg, hoping to put up solid numbers and also show the scouts his ability to pursue the football quickly on defence.

The latter, according to CFL.ca’s Marshall Ferguson, stands out the most about the Edmonton native’s game.

“A solid safe depth pick that filled the stat sheet several times over for the Dinos during his tenure,” said Ferguson. “Any [coaches or scouts] that saw him play live will understand how fast Rowe gets to the football in the moment of need.”

Rowe’s ceiling has yet to be determined, but expect the Calgary Dinos defender to at least carve out a role on special teams wherever he’s drafted.

For Rowe, football has been second nature ever since he started playing at 11 years old.

“I’ve always loved the game,” he said. “It was in me, and I would play football by myself just throwing the football up, back and forth in the backyard. It’s always been a part of my life.

“I’ve always looked for opportunities to challenge myself, and I definitely feel like being drafted is the next challenge ahead of me.”

The country’s top prospects will find new homes on May 3, when the 2018 CFL Draft takes place at 8 p.m. ET.