Watching the G7 Summit unfold in Quebec last weekend – and the titanic Trudeau-Trump match-up – got me thinking about Canada’s place in the world.

And that inevitably got me thinking about the Canadian Football League’s place in the world. As the people closest to me will attest, in my mind our league and our country are somewhat inseparable.

Just as Canada seeks to compete and win in the new global economy, the CFL needs to consider its position in the international marketplace.

Conventional thinking would suggest that the CFL’s growth is forever hampered by the fact that football as we know it – as opposed to the soccer variety about to explode onto your screens via the World Cup – is enjoyed only in North America.

Well, as is often the case with conventional thinking, that would be wrong.

I met recently with Oscar Perez, a successful businessman and the Chief Executive Officer of the Liga de Futbal Americano Professional in his country, Mexico. The LFA is three years old and expanded from four to six teams one year ago. The league’s goal is ten teams. (Sound familiar?) Sports fans in Calgary and Toronto might be interested to know that the Mexican league has teams named Dinos and Raptors.

Its teams typically play in stadiums with a capacity of six-or-seven-thousand. Still, the point is that North American-style football has much more than a pulse in Mexico; it generates some real passion.

Mexico has a population of 127 million and It is estimated 40 million are fans of North American-style football.

Okay, you might say, “So interest in the NFL has managed to spill into Mexico (in advance of The Wall being built – whatever happened to that?), but football as we know it is still not an international game.”

Well, I invite you to visit sometime a website called AmericanFootballInternational.com. 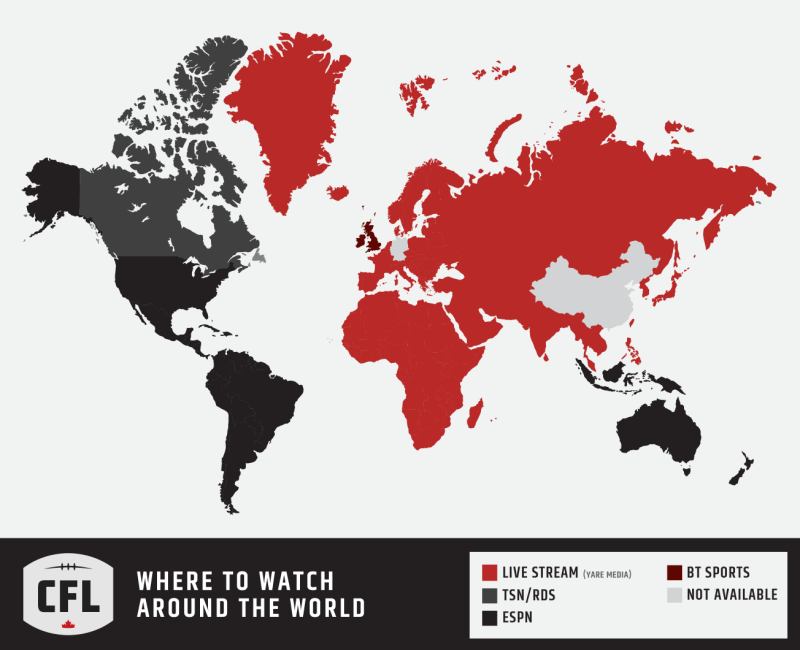 Sticking with the theme of an ‘international CFL’ in recent years the league has expanded its live viewership in over 100 countries due to live and on-demand streaming.

There you will see stories and updates on football being played all over the world: an eight-team league in Turkey, 17 different leagues in Europe, football booming in Japan and emerging in China and Africa, where the Cairo Hell Hounds recently won Egyptian Bowl IV.

Did you know that former BC Lions running back Cory Philpot, who is involved in the Canadian Junior Football League, offered last year to send some discarded equipment to the new Kenya 8-man American Football League?

The point is North American-style football has an international presence. And so should the Canadian Football League!

Our brand of football – with our wide field, lightning fast pace of play and high-octane offenses – deserves its place on the international stage!

There is an opportunity here to reach millions of new fans and, in the process, deliver the meaningful international broadcast or streaming agreements that can help build a bigger, stronger, better CFL.

But how can we leverage our amazing game and tap into this growing interest game around the world?

We could certainly generate larger audiences beyond our borders if some of the “internationals” on our rosters hailed from countries outside the U.S. and Canada.

Perhaps we encourage more CFL coaches to share their expertise and guidance with established and fledgling leagues abroad. Or we hold combines on other continents in search of great athletes with the potential to develop into excellent football players. Or, one day, we reserve spots on our rosters for “global” players. Or we could stage some pre-season games on foreign soil to expose and promote our fun and exciting version of professional football. Or we do all of the above.

Some of these may sound like far-fetched ideas. But I suspect there were those who never thought a top NBA player would come from China – until Yao Ming lit up pro basketball. And no doubt there were others who thought Africa might lack enough the coaching and facilities to develop top basketball talent – until Akeem Olajuwon dominated the NCAA and then the NBA, which to this day inspires an army of college and NBA scouts to visit Africa on a regular basis.

There is another bonus to this kind of global approach. Ming not only boosted NBA interest in China, one of the world’s largest markets. It attracted huge audiences of Chinese-Americans in the U.S. to arenas to see him play. Imagine the effect a CFL star from India or China might have on ticket sales and attendance here at home.

Yes, basketball is more widely recognized and played internationally. But the arrival of imports to the CFL from countries other than the U.S. could be closer than we think. Jose Maltos, a kicker from Monterrey, Mexico, was one of the final cuts this week of the BC Lions, despite making a 48-yard field goal in pre-season action. Maltos hit a 56-yarder playing for Mexico at the International World Cup in Austria back in 2011. The Riders’ punter, Josh Bartel, is an Australian who came to Canada and the CFL after playing Australian Rules Football.

Our league will always be proudly and intensely Canadian. It will always have a large contingent of homegrown players. And it’s hard to imagine a day when the United States and Canada, with their deep football roots, won’t be the world’s leading sources of pro football talent. But think of the possibilities if we in the CFL added some international flair and content.

Thinking differently – even thinking globally – is one of the things that will help us build a bigger, better, stronger CFL.

Our season kicks off tomorrow night in Winnipeg. Enjoy the game and the entire opening weekend. It’s going to be an awesome year. And remember: if those of us who love the CFL think big and have a bolder and broader vision for our league, the CFL’s best days are still ahead of us.