TORONTO — Following the success of the inaugural CFL NFL Flag football tournaments in 2017, the Canadian Football League (CFL) and National Football League (NFL) announced on Thursday that the joint flag football initiative will continue in 2018 and expand to 10 stops across the country including Atlantic Canada.

The 10 regional tournaments will be held across Canada and will bring together young athletes, CFL stars and alumni, football professionals, parents and communities. A championship will be held in Edmonton, Alberta the week of the 106th Grey Cup presented by Shaw as part of the festivities. The winner of this tournament will travel to the NFL’s Pro Bowl Week to participate in the NFL FLAG Championships.

The program, which is open to 10- and 11-year olds (those born on or after January 1st, 2007), is a way to highlight and showcase flag football as a method of instructing players on football fundamentals, sportsmanship and teamwork while promoting physical activity. 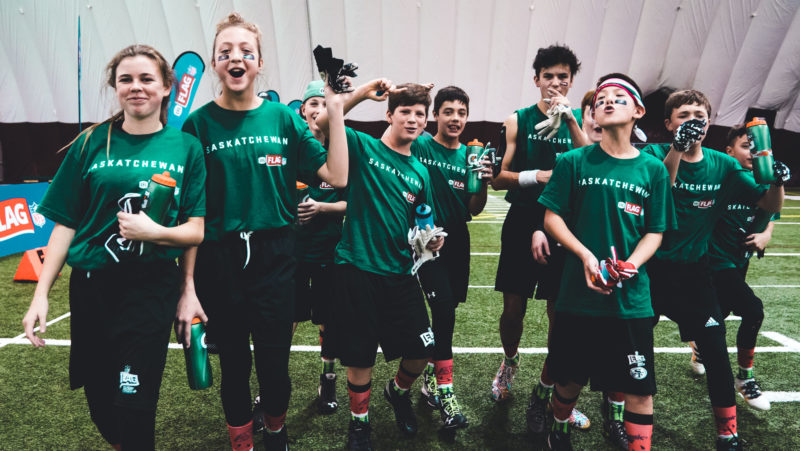 The winners of the championship during Grey Cup Week in Ottawa in 2017, the Junior Riders of Saskatchewan (Johany Jutras/CFL.ca)

Last year’s inaugural tournament saw the Junior Riders of Saskatchewan put together an overall record of 11-0-1 between regionals and the championship. They outscored opponents 266-47, including a 20-7 win over the Surrey Tigers of BC during Grey Cup week. The win earned them a trip to Pro Bowl Week in Orlando, where they went 2-2, beating two teams from China and falling to Mexico and the United States.

“Last year’s tournament saw hundreds of young football players across the country turning out to learn, play and lead,” said Vanessa Morbi, Vice President, Marketing and Digital, Canadian Football League. “We’re proud to continue our commitment to promoting a healthy lifestyle and growing the game alongside our partners at the NFL.”

“The NFL is proud to partner again this year with the CFL, to continue to grow the game of football in Canada,” said David Thomson, Managing Director, NFL Canada. “Flag football is a fun, exciting and easy way for youth to get into the game, and can develop important life skills including teamwork, commitment and the value of leading a healthy, active lifestyle.”

• Edmonton, Alberta: The week of the 106th Grey Cup Presented by Shaw.

Those interested in registering for the program can find more information at cflnflflag.ca Both the CFL and the NFL will continue to invest in youth football programming and promote physical activity.