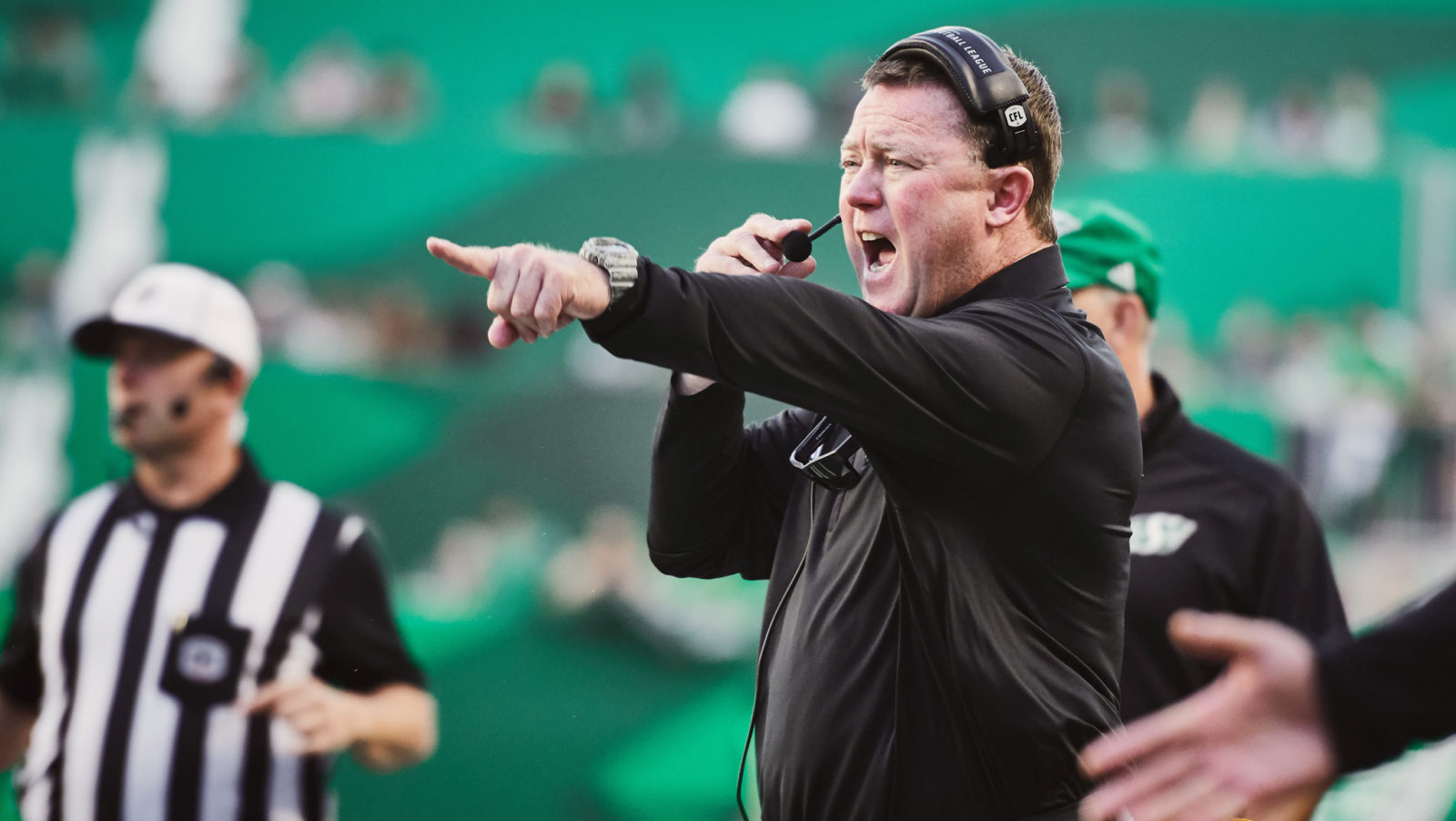 Hello, Wally Buono. My informal Twitter poll during Friday night’s game showed that people really want to see you wearing orange slacks for BC’s road games. C’mon, Godfather. If anyone can pull that off it’s you. One intrepid Tweep even suggested you don white alligator loafers to really tie the look together. Oh, yeah.

1. THE RIOT ACT WORKS WHEN YOU BACK IT UP WITH GUTS

Apparently the Saskatchewan Roughriders were having a bad week of practice. Apparently Head Coach Chris Jones whistled a halt to the proceedings at one point to gather his team so he could fire some choice words at ’em, dadgum it.

Apparently, offensive lineman Brendon Labatte, the stalwart team leader who is in his seventh season with the ‘Riders (eleventh overall) agreed and also let his displeasure be known.

“It has been a long time coming, honestly,” LaBatte told the Regina Leader-Post early in the week. “To go out there and not even come to practice with the intent of getting better, I don’t understand it.”

Words are one thing, actions another. You have to think that LaBatte’s gutsy performance in Hamilton was a help in spurring the Roughriders to a win. Suffering a badly hobbling knee injury early on in the contest – one that forced LaBatte into the Saskatchewan locker room for a spell – the big man came back to gut it out at left guard despite the discomfort.

“That’s a brother,” teammate Dan Clark told Roughriders.com. “Unless that leg is completely broken or that knee is torn or something like that, that man will come back.”

Words are good. Guts are even better.

Yes you can, unless you’re a puppy. Or a baby anything, really.

It wasn’t just LaBatte’s gritty performance that helped get the Roughriders some momentum. It was a choice by the Hamilton Ticats to have quarterback Jeremiah Masoli try an onside pooch punt during the third quarter.

Up by a score of 17-14 and facing third and 13 from the Saskatchewan 53, the odds-on play is to punt and pin and ask your defence to keep the opposition from driving.

Instead, Ticats Head Coach June Jones opted for trickery, but it fooled nobody in green and white, least of all defensive lineman Willie Jefferson who, seeing Masoli standing back in shotgun, did what he’d always do in that situation anyway, which is fire the jets and try to go get him. Getting a big mitt on the attempted kick is what Jefferson did and the Riders took over at the Hamilton 47. A busted cover later, Naaman Roosevelt was in the end zone and the ‘Riders had the lead.

Meanwhile, in Calgary on Saturday night, Alouettes’ Head Coach Mike Sherman chose to gamble on third and one from his own 25-yard line, late in the third quarter, with Montreal trailing 19-8. That was eyebrow-raising enough. The other eyebrow went up when the Als put quarterback Matthew Shiltz into shotgun on the play. With a wind at their backs, a punt might have been a good thing for Montreal. Instead, they suffered a sack, turning the ball over at their own 19-yard line. A field goal stole the momentum that the Als had earned with a touchdown earlier in the quarter, and the Stamps were home and cooled from there.

Some things can’t be too cute. Game management? Not one of them, apparently.

3. MIKE OSHEA KNOWS YOU CAN GET TOO CUTE

Mike O’Shea knows you can get too cute, although it appeared at first that he hadn’t really let that sink in. Winnipeg’s head coach learned about being too cute last week in Vancouver, when a couple of third and two gambles were stopped by the BC Lions, providing lift for the Leos on the way to a come-from-behind win.

Against Toronto on Saturday, O’Shea first opted to gamble on third and two from the Argos’ 12-yard line, leading by 15, and more than nine minutes remaining in the game. After a moment or two, O’Shea called his offence off the field and had Justin Medlock make it a three score game with a chip shot field goal.

4. WE SHOULD BE PAYING MORE ATTENTION TO CHRIS ACKIE

It’s not completely our fault that we haven’t been, up to this point.

After he was drafted by Montreal in 2015, the Laurier grad fought it out on special teams, mostly, during his first two seasons as the Als had difficulty finding a position that fit him best. Being pretty good at many of them can sometimes cause confusion for personnel people and coaches alike, and Ackie was that problem for Montreal’s schemers. His third season, 2017, was cut short after just six games, when he suffered an arm tendon injury.

So, we’d only occasionally seen him flying around out there during his first three years.

Things are different in 2018, as Ackie is a lynchpin of the Montreal defence, and stands second on the tackles list with 36, just two behind Winnipeg’s Adam Bighill, who has played one more game.

He is at home at the weak side linebacker position, adding another six tackles against the Stampeders on Saturday night – a total, by the way, that equalled his lowest output of the year – coming off a nine tackle show against Ottawa in Week 4.

The promise of Chris Ackie is just now starting to be fulfilled.

5. THE PRESSURE’S OFF TREVOR HARRIS

For now, at least. Ottawa’s QB1 was getting heat after a couple of less than scorching performances in losses to Calgary in Weeks 3 and 5, where his combined passing totals came to 27 of 51 for 228 yards, no touchdowns and three interceptions.

However, when you engineer an eight play, 80 yard touchdown drive in the final minute to win it and finish the night going 30 for 44 for 363 yards and a TD pass, you get to have the relief valve opened on the pressure that was coming down on you.

Now the question becomes: Can Harris keep the beat going in this week’s crucial match-up in Hamilton?

BONUS TAKEAWAY: You can be a better quarterback when Greg Ellingson reaches back to stab one-handers.

I want the Winnipeg offensive line in front of me when I’m walking down the street with my head buried in my phone. And, yeah, I’d chant “we don’t stop for no one,” while I’m audaciously steppin’.