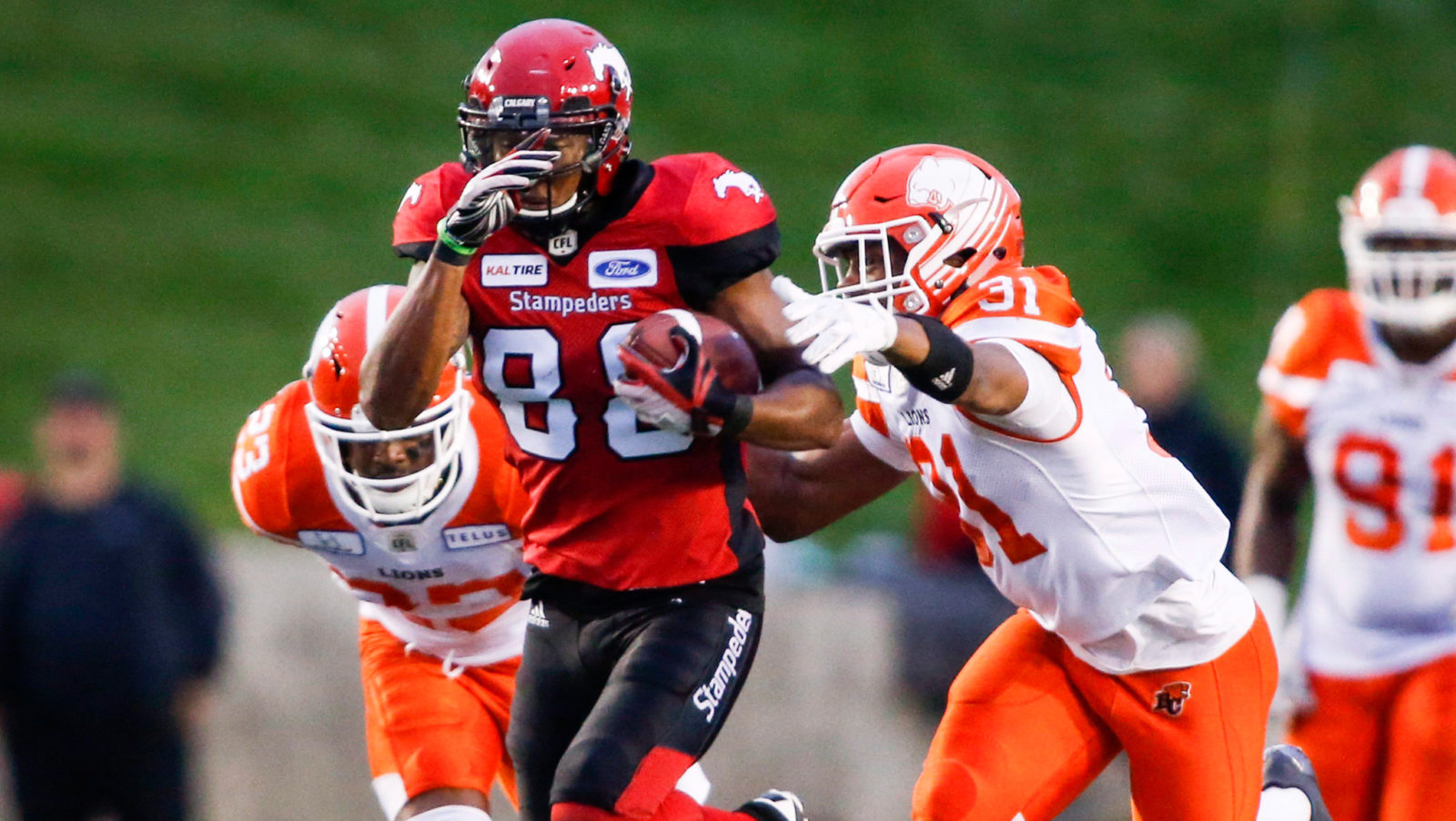 Dwayne Johnson, a.k.a. The Rock, has certainly executed his share of derring-do up there on the big screen.

Kicking butt in ancient Egypt in The Scorpion, for instance. Or hanging tough against a 50-foot wave in San Andreas.

No end of explosions, the rescuing of fair damsels and slow-motion carnage in one of his action-packed popcorn crowd pleasers.

Haha thanks for the luv KJ. My career in the @CFL was very short lived but a lifetime of defining lessons. Just take the word from Captain Short Shorts over here 👀👇🏾🤦🏽‍♂️ https://t.co/ux3CsWpl9E

Now the Calgary Stampeders star slotback is probably never going to be asked to take on the Lou Hobbs role in, say, The Further Fate of the Furious.

Because The Rock – a Stampeder linebacking hopeful for a brief spell over two decades ago – is never gonna boss a pro football game the way Jorden did last night at McMahon Stadium, either.

On a day when the Stamps improved to 7-0 for the first time since 1995 – the same season, incidentally, that Johnson had his cameo out at McMahon Stadium – Jorden turned out to the star attraction.

A dynamic performance of five catches for 185 yards (an eye-popping 37-yard average) and a touchdown. AND a new Twitter friend in Hollywood’s highest-paid action star.

“I honesty didn’t know it was that big of a game,’’ confessed Jorden of his output. “People kept telling the yardage and stuff like that. I knew I had some big passes.

“That’s the kind of things we have to make. When we’re not getting the routine plays, the routine catches, we need to make those big plays.

“That’s the type of receivers we feel we are, that we should be able to make those crazy plays no one expects us to make in order to keep our offence moving.”

RELATED:
» The Snap: The Rock gives some love to Kamar Jorden
» Recap: Stamps remain perfect with win over BC
» Stamps satisfied, not thrilled with victory over Lions

With Saturday vs. the BC Lions being Legacy Night at McMahon and slew of White Horse alumni in attendance, Jorden had posted a couple photos of himself on twitter wearing a Stamps’ retro No. 74 jersey, the number Johnson wore during his short spell in Calgary.

The Rock, to his utter shock, caught wind and replied.

“I wanted to do something to represent the team,’’ Jorden explained. “So I tried to think of a jersey nobody had. That was rare and stuff.

“Then for some reason The Rock just popped into my head. I thought: ‘Ain’t nobody got that jersey.’ So I went with The Rock. That’s what I chose to wear today.

“I tried to get a couple guys to tag it so he’d see it. And he seen it. I was hoping the blue check helped, like: He’s somebody.

“I didn’t know until the first quarter when our PR guy showed me the tweet. I already had a big catch before that.

“But, you know, that was a big moment.

“I can tell people The Rock tweeted me.”

It’s a honor big dawg! That jersey ended up being my good luck charm yesterday!! 🙌🏾😤 Whenever you ready to come back tho, just let me know… I’ll ask Huff to put you on our neg list. 😉✊🏾 https://t.co/33uWpLY7Xu

Exactly half of QB Bo Levi Mitchell’s 370-yard passing dissection of the Lions came via his Jorden collaborations.

“K.J., man, was unstoppable tonight,’’ praised Mitchell. “That guy made plays all the way down the field, behind the line of scrimmage and blocking all game.

“The player of the game to me.

A 53-yard TD hook-up in the first quarter, hardly the tightest spiral of the Katy gunslinger’s career, got the Mitchell-Jorden train off and rolling.

“That,’’ acknowledged Mitchell, “might’ve been the ugliest pass I’ve ever thrown. I don’t know he caught it. It looked like a kick. It was end-over-end. So pretty impressive to get that one pulled down.”

“It was all over the place,’’ Jorden agreed, smiling. “It was definitely a duck.

“But he put it out there. One thing Bo always says: ‘When you see me scramble, go. Just go.’ He wanted to throw it deep. I trust the man. I just kept going, saw the ball up there, felt I could get it, and I got it.

“I have a lot of confidence in myself as a football player and as a receiver. I honestly feel every time I step on the field, I should score a touchdown and run past the guys in front of me.

“I expect those type of performances from myself every day.”

Dwayne Johnson, it seems, isn’t the only guy capable of the derring-do.

“It’s just a good day in general,’’ acknowledged Jorden. “I had fun today.

“With The Rock, yeah. It was just better to get the win, most importantly. It would’ve spoiled everything if we hadn’t.