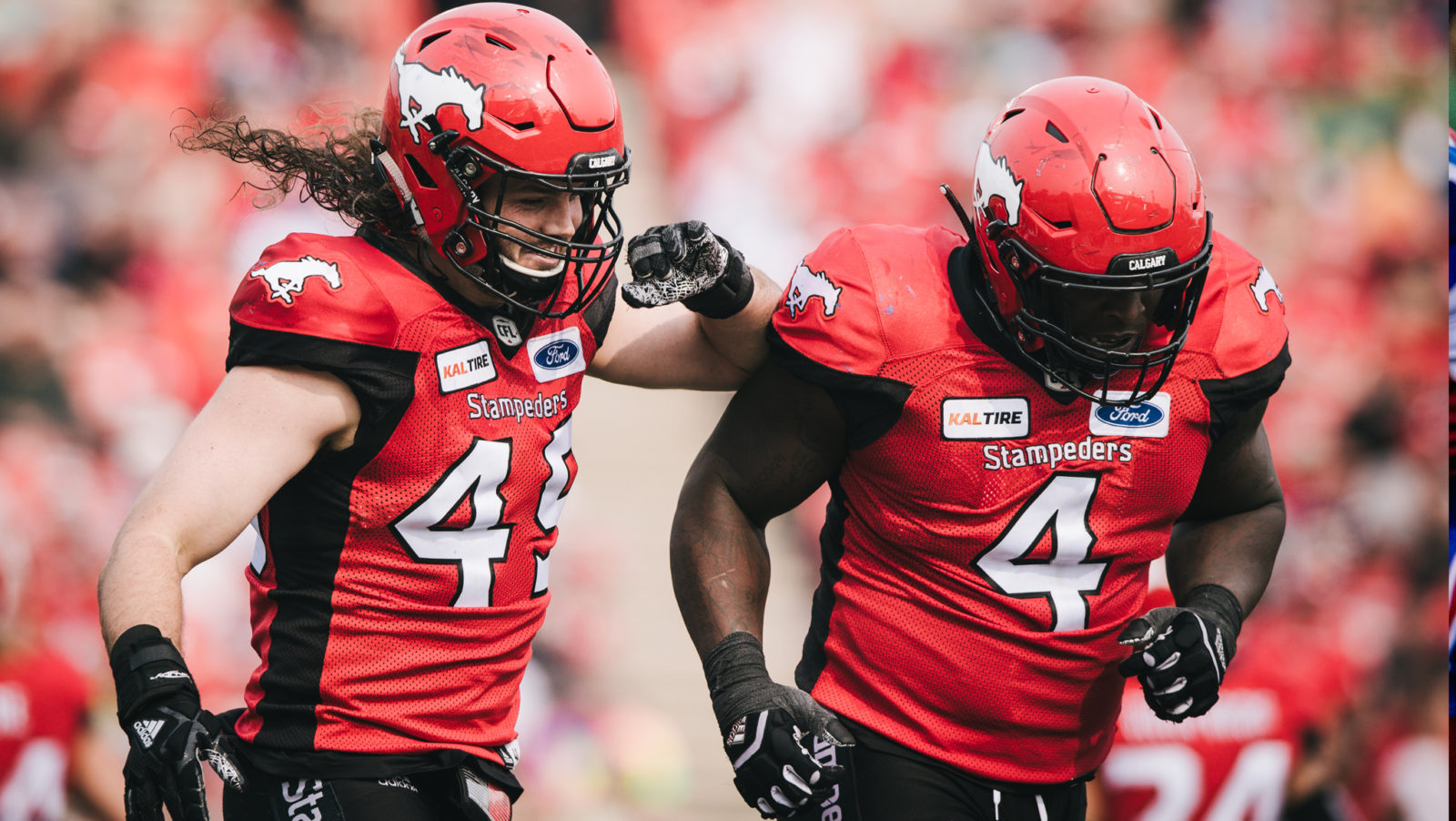 TORONTO — From a budding Ottawa-Montreal rivalry Friday night and a Sunday prairie brawl to the traditional Labour Day Monday double-header, Mark’s Labour Day Weekend is one of the most exciting times on the CFL calendar.

This week’s slate carries so much weight in the standings — with significant playoff implications in every game — but there’s something extra in the air when any of these teams clash in the first weekend of September.

The Labour Day tradition is one that dates all the way back to the late 1940s. So as we get set to add another chapter, CFL.ca and PwC look back on the history of Labour Day Weekend: 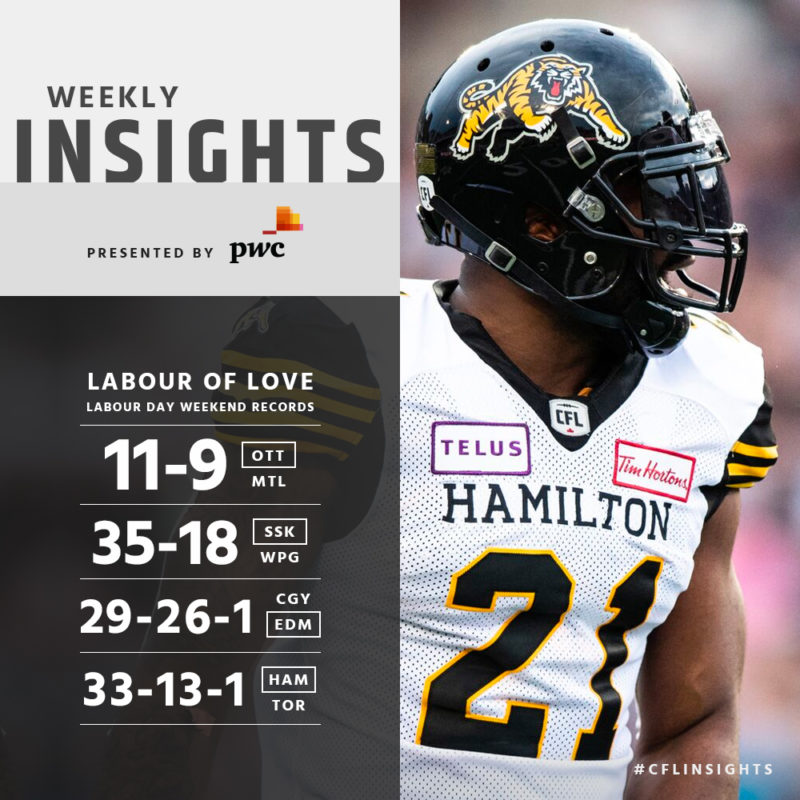 While the Montreal-Ottawa rivalry was only recently re-ignited when the eastern Ontario franchise returned to the league in 2014, Friday night marks the 21st meeting between the two cities on Labour Day Weekend. The Ottawa franchise, which includes the previous renditions in the Renegades and Rough Riders, holds an 11-9 edge in the series.

Of the 20 meetings in the Labour Day series dating back to Sept. 3, 1949, exactly half of them have been decided in the final three minutes, however not last year’s. The REDBLACKS have won back-to-back games over the Alouettes on Labour Day Weekend, including a 32-4 blowout in Montreal a year ago.

In those two games, Trevor Harris has completed 72.8 per cent of his passes for 625 yards and four touchdowns with only one interception.

While the REDBLACKS have a chance to flex their muscles at the top of the East Division, the Als are coming off their second win of the season, a 25-22 victory over Toronto in Week 11, and can stay in the playoff hunt with an upset in Ottawa.

With the emergence of the infamous ‘Banjo Bowl’ rematch a week after Labour Day Weekend, the rivalry between prairie neighbours Saskatchewan and Winnipeg has only heated up. Sunday marks the 54th meeting in Regina between these two teams on Labour Day Weekend (they’ve played one game in Winnipeg), with the Riders holding an all-time edge of 35-18 (.660).

Even with the Riders’ ups and downs of the last decade, the Green and White have had a pronounced edge when it comes to the early September classic, winning 12 of the last 13 years. The Bombers’ last victory came in 2016.

Of note, the Riders enter the game with the better record than their opponent for just the 15th time in the series. They’ve won 11 of the previous 14 games when owning the better record, and on Sunday they’ll look to create some more distance between themselves and their hated rival.

There will be some familiar faces in this game for fans of both allegiances. Former Rider Weston Dressler suits up for the Bombers, coming in as the fifth-leading receiver all-time in the Labour Day series between these teams. At 40 catches for 488 yards, he needs just 33 yards to pass Jeff Fairholm (520 yards) to move into fourth.

Also on the Bombers side, Nic Demski returns to Saskatchewan for the first time since signing with the Blue and Gold as a free agent in the off-season. Demski was the sixth overall draft pick by the Riders in 2015.

Sunday marks the fourth consecutive year the Riders will start a different QB in the annual game: 2015 Brett Smith, 2016 Darian Durant, 2017 Kevin Glenn, and now, 2018 Zach Collaros. Collaros was 3-0 in Labour Day Classic games when he was a member of the Tiger-Cats

There’s magic in the air this weekend in Calgary, where the ingredients for an all-time classic are no doubt present. The leading candidates for Most Outstanding Player will face off at quarterback in Stamps pivot Bo Levi Mitchell and Eskimos slinger Mike Reilly, while the league’s top three receivers also meet in D’haquille Williams (947), Kamar Jorden (895) and Derel Walker (875).

The anticipation for Monday’s division rivalry has been building for nine months, ever since the Stampeders inched past the Eskimos to win the Western Final, 32-28, last November. That game featured zero turnovers and only two net yards and one first down separating the two western powerhouses, along with a controversial decision by Jason Maas to kick a late field goal rather than gamble for the game-tying score.

The 58th meeting between these clubs on Labour Day will surely add another exciting chapter to this storied history. While Edmonton holds the all-time edge in the Labour Day Classic, going 29-26-1, the Stampeders have won the last six on Labour Day and 10 of the last 12. Edmonton’s dominance came in the 1950s, when the Green and Gold won seven in a row from 1950 to 1961.

Only two wins separate Calgary (8-1) and Edmonton (6-4) going into Sunday’s affair, with the Stampeders’ eight victories marking the second-most going into Labour Day since the series began. Only the 1963 Stamps had more, going into that game 9-0.

In the clash of what will likely be two future Canadian Football Hall of Fame quarterbacks, Bo Levi Mitchell, the CFL’s all-time leader in winning percentage for a quarterback, holds a 4-0 edge in the series while Mike Reilly is 0-3.

A home-and-home sweet by the Stampeders would likely put them in cruise control at the top of the West the rest of the season.

Despite such a storied history between the Hamilton Tiger-Cats and Toronto Argonauts, Labour Day has been particularly one-sided. The Ticats hold a firm grip on the all-time series on Labour Day with a record of 33-13-1. They’ve won four straight Labour Day Classics and have yet to lose one at Tim Hortons Field.

The Boatmen will try to change the tide in the 48th edition of the classic involving these two teams, something that hasn’t happened since winning on Sept. 3, 2012, the same year the Argos went on to win the 100th Grey Cup Championship.

In the four games since then, all played at Tim Hortons Field, the Ticats have outscored the Argos 128-82, including a blowout in 2015 when quarterback Zach Collaros threw for 400 yards and four touchdowns on 26-of-38 passing. There was no Labour Day Classic in 2013 due to scheduling conflicts.

Last year added another unique chapter to the rivalry, when a bad storm led to a delay of roughly two hours. After battling back and forth, a missed field goal by Argos kicker Lirim Hajrullahu in the game’s final minute clinched a 24-22 victory for the Ticats in June Jones’ first game as head coach.

Monday’s contest, the first half of a home-and-home, offers significant importance in the season for both teams in the grand scheme of things. With a crossover from the West looking increasingly likely, and the REDBLACKS leading the East with a 6-3 record, only one game separates the Argos (3-6) and Ticats (4-5) in the battle for playoff positioning.