The BC Lions were going toe-to-toe with the Calgary Stampeders in the 2008 West Final and felt like they might be able to take the home team out.

Leading 12-9 in a still-early third quarter, the Lions were sparked by a strong 56-yard punt return from Ian Smart. The Lions got all the way to Calgary’s seven-yard line before Mike Labinjo forced a fumble that the Stamps recovered.

The Lions answered back with a bigger defensive play. Kory Banks snagged a Henry Burris pass at Calgary’s 28 and got it all the way to the one-yard line.

“I remember us being on the one-yard line and thinking that it’s going to be an easy touchdown,” former Lions receiver and hall of famer Geroy Simon recalled.

“He crashed the party,” Simon continued. “He was just one of those guys, you could not block him when he really wanted to play and really wanted to be dominant. He made it tough, especially in 2008.”

Labinjo stood in on the defensive line and caught Smart for a loss of a yard. The Lions went back to him again and Labinjo caught him for a loss of two yards. He finished the West Final with six tackles, three quarterback sacks and a forced fumble. Simply put, that dominant Stamps team wouldn’t have won without Mike Labinjo. 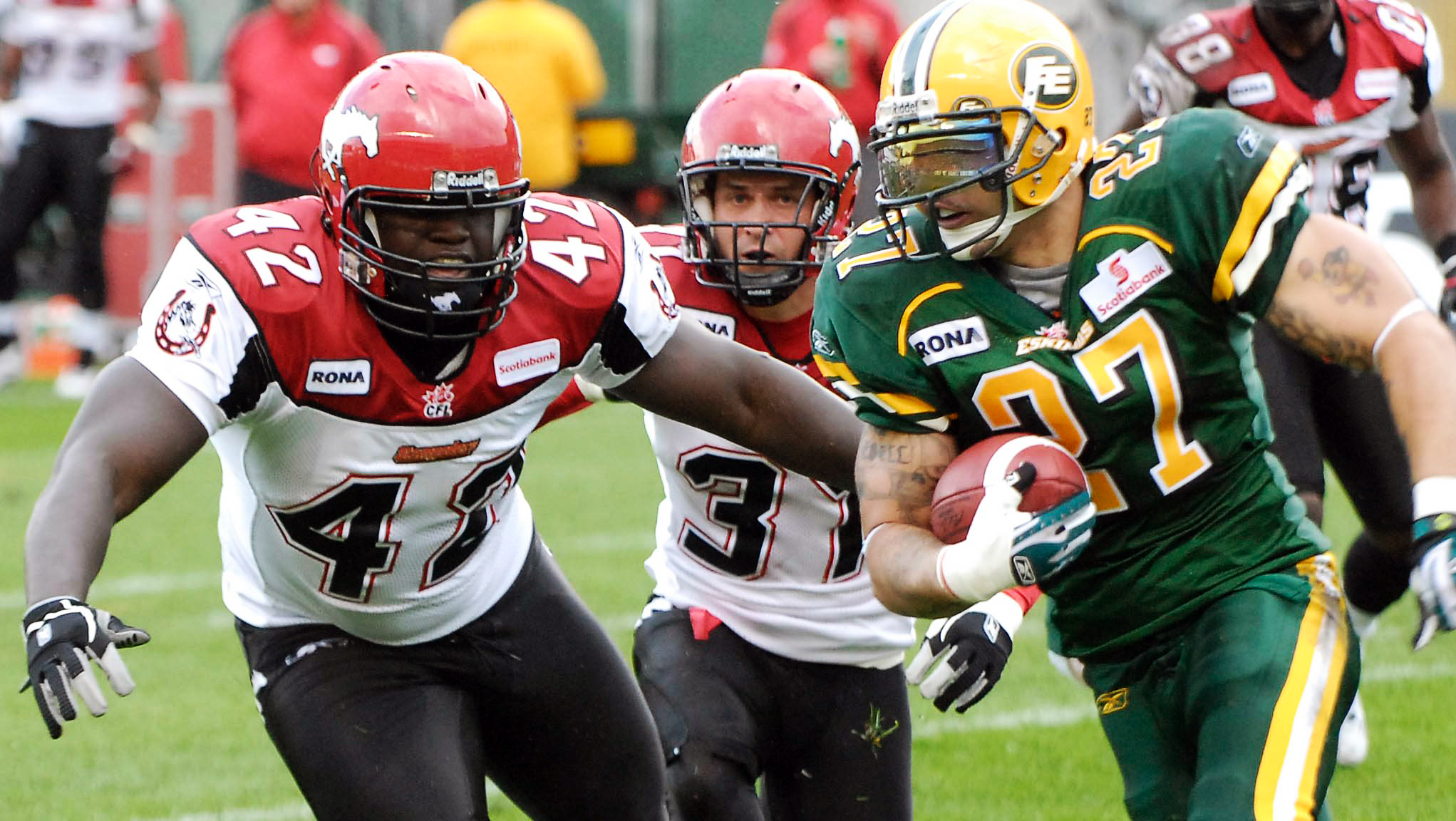 “He stopped BC almost single-handedly on a couple of key plays,” said Mark Stephen, the Stampeders’ full-time radio voice for 22 years.

“Then he had a very, very important part of the Grey Cup game as well.”

A week later, Labinjo had two tackles, a sack and three knockdowns in the 96th Grey Cup, spoiling the party in Montreal for the hometown Alouettes and ending the Stamps’ seven-year Grey Cup drought.

Labinjo, a Toronto born defensive end that played with the Stampeders from 2007 to 2010, died on Saturday, Sept. 22 at his home in Calgary. He was only 38.

“It’s really just unbelievable,” Chris Jones said on the phone from Regina. He was the Stampeders’ defensive coordinator that year and has many vivid memories of Labinjo.

“I don’t feel like I’m an older guy. I’m 51-years old and when one of your players that you know is more than a decade younger than you passes away it seems unreal. It shouldn’t happen. It’s just a very unfortunate event.

“He was a really happy-go-lucky guy. He wasn’t always the best practice player but he certainly showed up on game day and did some good things. He was always a fun guy to be around.” 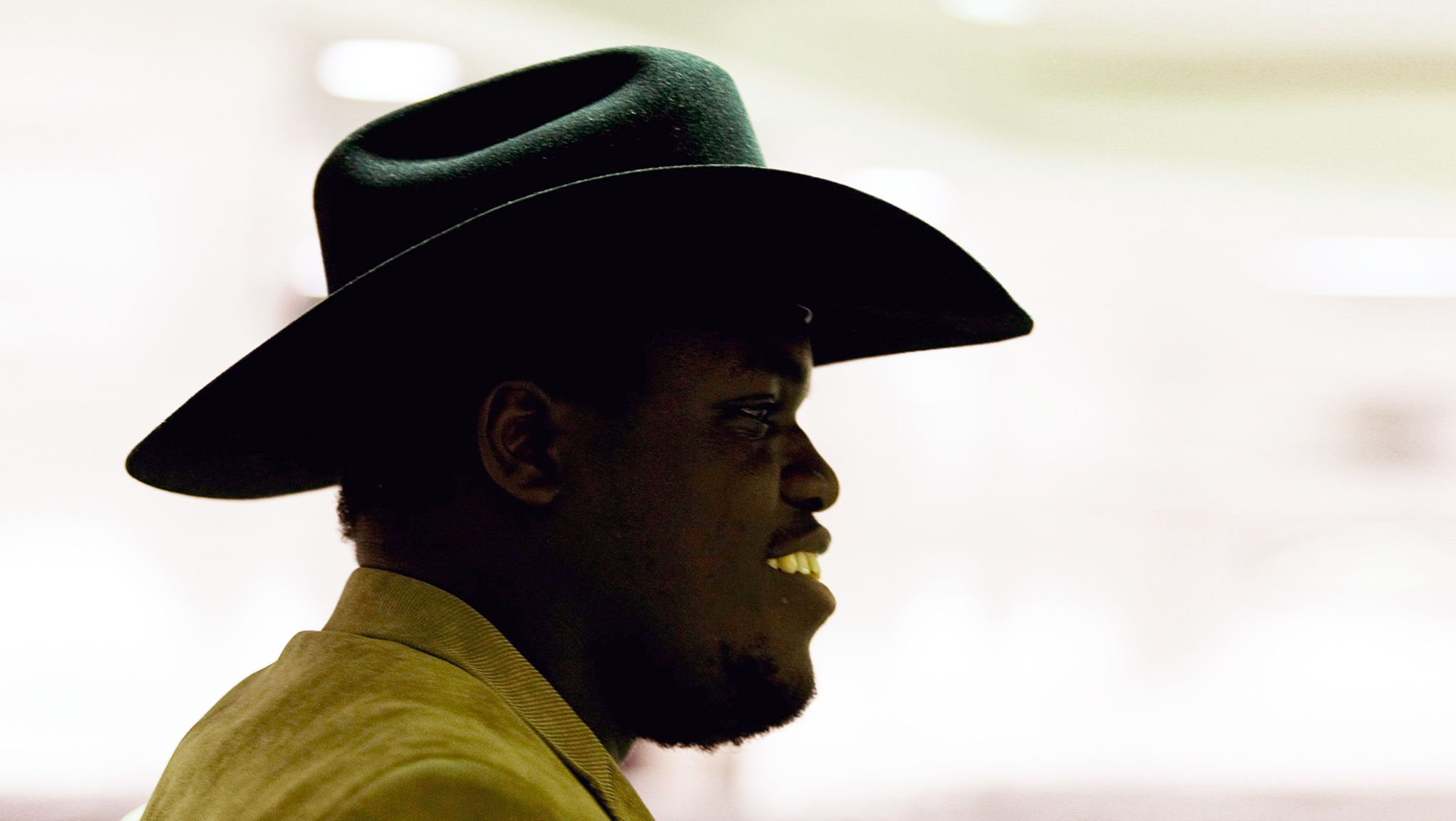 Sporting a cowboy hat, Mike Labinjo arrives at the annual West Breakfast at the 96th Grey Cup in Montreal in 2008 (The Canadian Press)

Anthony Calvillo remembers that Grey Cup game well and how often he saw No. 42’s big, waving hands in his face.

“I remember the knockdowns because it was annoying,” Calvillo said, laughing now at the memory.

“I remember him being a force and him being one of the players that we had to be aware of. Calgary had a lot of talent and he made a difference on the defence just with his presence.

“He wasn’t just somebody that was playing his role. He was somebody you had to be aware of and it’s something that stands out in my mind.”

Simon, who had 115 yards receiving in the loss that day, remembers seeing a man on a mission on the other side of the ball.

“I remember we couldn’t block him,” he said.

“He was just a guy that for the short amount of time he played in the league, he wrecked shop up here. He was probably the only guy that gave (Lions’ o-lineman) Rob Murphy trouble.

“That’s saying a lot because Rob was a dominant, dominant player, especially early in his career. He was the one guy that it seemed like Rob could not block. He was definitely a great player.” 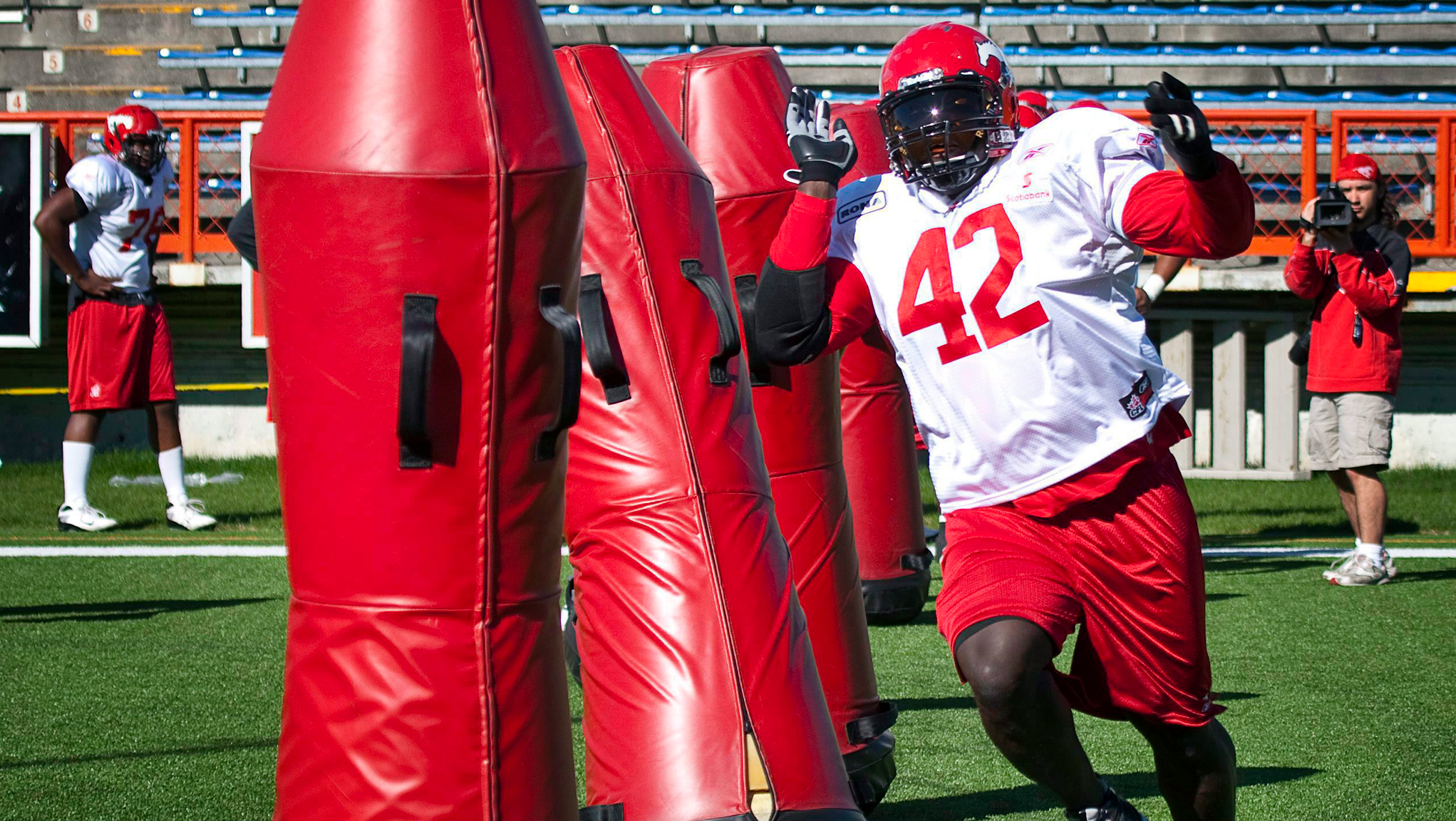 Mike Labinjo goes through the paces at Calgary Stampeders training camp back in 2008 (Stampeders.com)

Before the came to the Stampeders, Labinjo spent three years in the NFL. He was with the Philadelphia Eagles in 2004 and the Indianapolis Colts in 2005, before landing briefly with the Miami Dolphins.

He had defensive 61 tackles, including nine for a loss and seven on special teams through
44 games. He had six sacks, seven knockdowns and two fumble recoveries as well.

“He was a part of…a very, very good defence but he was that extra dimension,” Stephen said.

“A great athlete and great guy that could do a little of everything.”

“He was just a real smart player, a very cerebral player,” Jones said. “He could take the coaching and go out and execute it.”

As these things tend to, the memories of the celebration are a little fuzzy for all parties involved.

“I don’t really remember anything absolutely specific other than the fact it was a really good night. The guys had a great time,” Jones said. “What a great group of guys it was in ’08.”