Riding a remarkable 20-game overall winning streak heading into the playoffs, the reigning Vanier Cup champion Western Mustangs top the U SPORTS football national rankings for the 10th time in as many polls this season.

The Mustangs (8-0), who enter the OUA post-season as the No. 1 seed for the fourth consecutive campaign, received 114 points from the Football Reporters of Canada panel in this week’s voting and an additional 120 from the ELO Rating System, for a combined total of 234. 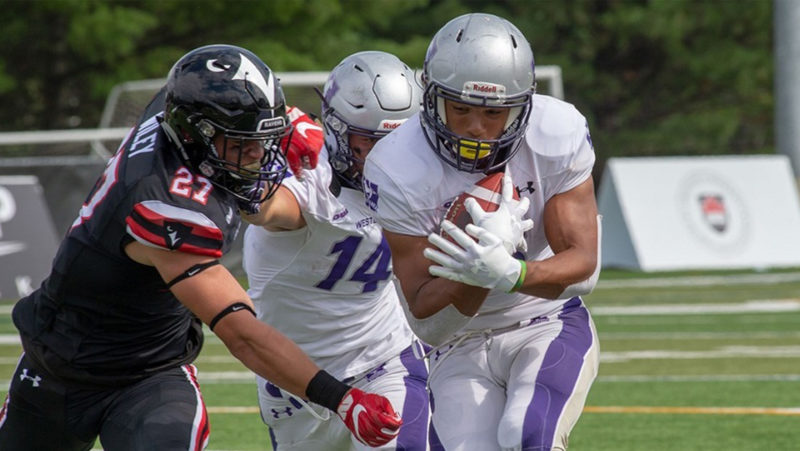 The No.-1 Western Mustangs will host the No-8 Carleton Ravens in one of the OUA’s playoff Semi-Finals this weekend. (Val Wutti/Carleton Athletics photo)

Western (7), Laval (4) and Calgary (1) were once again the only teams to merit first-place votes from the FRC panel.

The post-season got underway last weekend with a pair of OUA quarter-finals.

In Guelph, freshman Jean-Paul Cimankinda rushed for 256 yards and three touchdowns as the Gryphons downed Waterloo 45-34 to advance to the league Final Four for the sixth time in seven years.

In the nation’s capital, Nathan Carter was equally impressive with 172 yards and three majors on the ground as the Ravens edged McMaster 30-25 to return to the OUA semis for the third time in four seasons.

Meanwhile, the regular schedule came to an end in the three other conferences. Results from top-10 squads included Calgary 52, Alberta 6 (at Alberta); Montreal 16, McGill 0 (at McGill); Saskatchewan 57, Regina 14 (at Regina); UBC 38, Manitoba 34 in overtime (at Manitoba); Acadia 31, Saint Mary’s 2 (at Acadia).

Western, Laval and Ottawa all enjoyed a well-deserved rest.

In the Dinos’ lopsided win, quarterback Adam Sinagra passed for 355 yards in three quarters of action to finish the regular season with 3,233 yards, eclipsing the previous U SPORTS record of 3,186 set two years ago by Regina’s Noah Picton.

For their part, the Carabins registered their second straight shutout and their third of the campaign to wrap up league play with 46 points allowed in eight contests, the lowest total in the country this fall and a new RSEQ standard.

The seven conference semifinals are all set for Saturday, with Western, Laval, Calgary and Acadia beginning the defence of their 2017 titles.

The top-ranked Mustangs get back on field at 1 p.m. ET/10 a.m. PT at TD Stadium in London (Rogers TV – tape delay & OUA.TV) against Carleton, a team that pushed the reigning national champs to overtime in their OUA opener in Ottawa, back on Aug. 26.

The No. 2 Rouge et Or host Sherbrooke hoping to improve to 30-0 all-time against their provincial rivals.