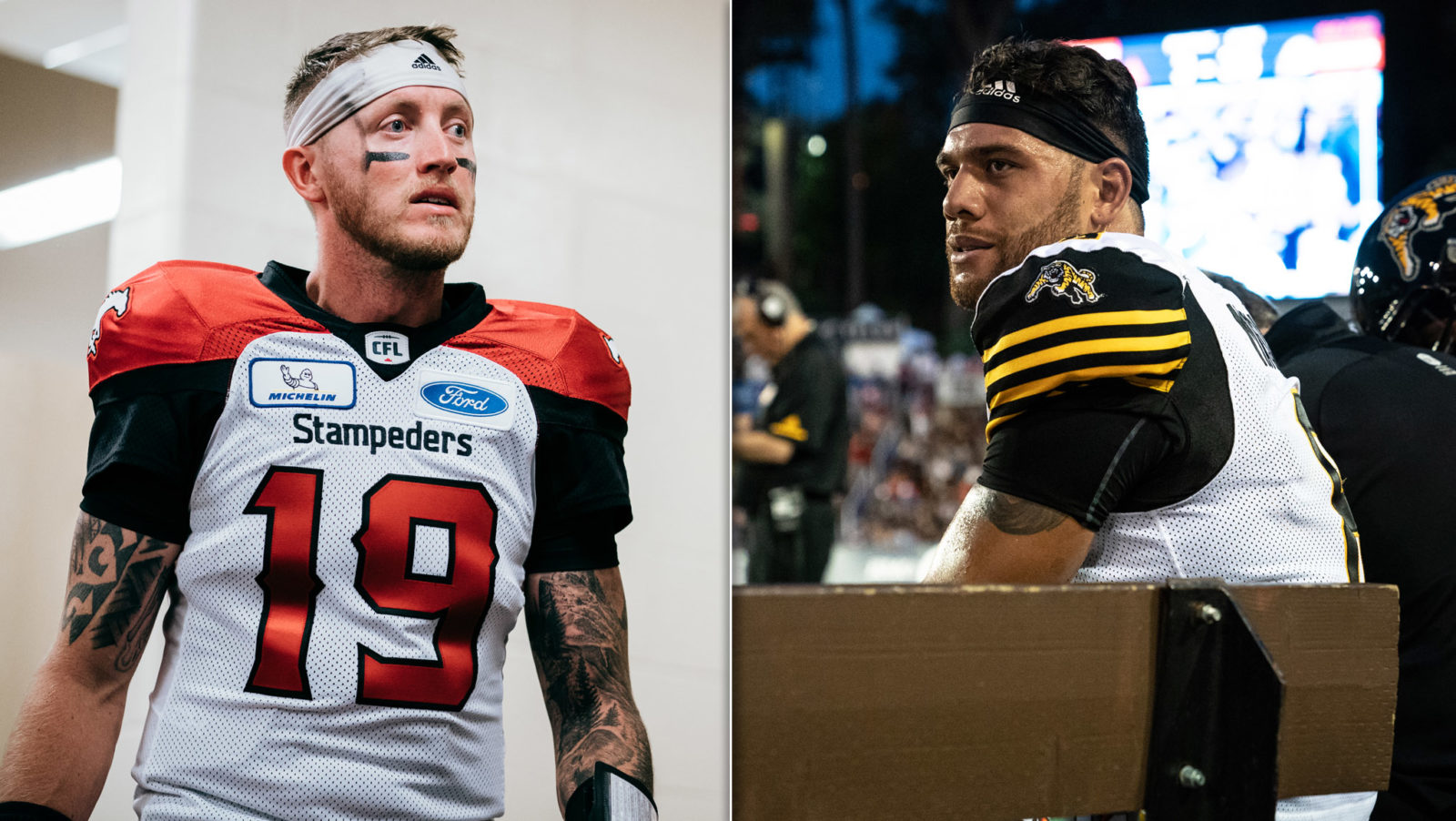 The Canadian Football League announced on Thursday that the two players have been voted Most Outstanding Player in their respective divisions. The winner will be announced at the Shaw CFL Awards on Thursday, November 22 at the Winspear Centre in Edmonton as part of the festivities for the 106th Grey Cup presented by Shaw.

The Shaw CFL Awards, which include seven categories, are decided by 68 voters from the Football Reporters of Canada and head coaches from across the league.

Here are this year’s nominees: 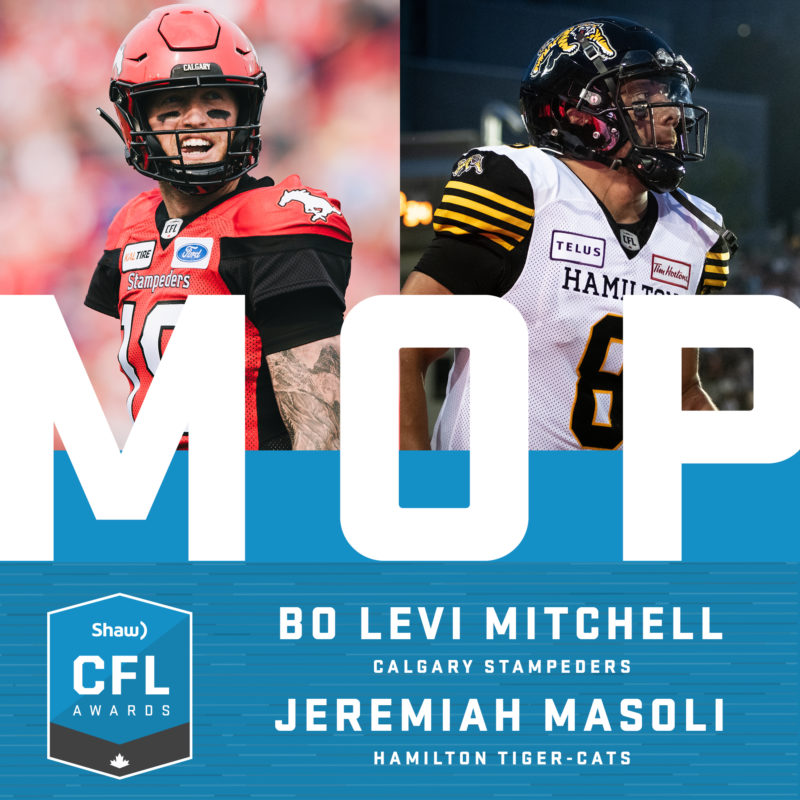 Bo Levi Mitchell earned his third career Most Outstanding Player (MOP) nomination (previously nominated in 2015 and 2016) and is looking to capture his second MOP, his first since 2016. The Katy, Texas native put up career highs during the 2018 season. Mitchell passed for 35 touchdowns (a new personal best) while competing 60.9 percent of his passes and notching his second career 5,000+ passing yard season. Mitchell had two games where he passed for 400+ yards and eleven games where he passed for multiple touchdowns. Despite a rash of injuries Mitchell helped the Stampeders win the West Division and place first overall this season.

In the East, Jeremiah Masoli obliterated all his personal benchmarks, including passing yards (5,209) and passing touchdowns (28), in his first full season as a CFL starting quarterback. Masoli reached the 5,000+ yard mark for the first time in his career and becomes the first Ticats player to be nominated for the award since Danny McManus in 1999. During the season he passed for 300+ yards in 12 games, which is a Tiger-Cats record and is tied for fourth in CFL history. 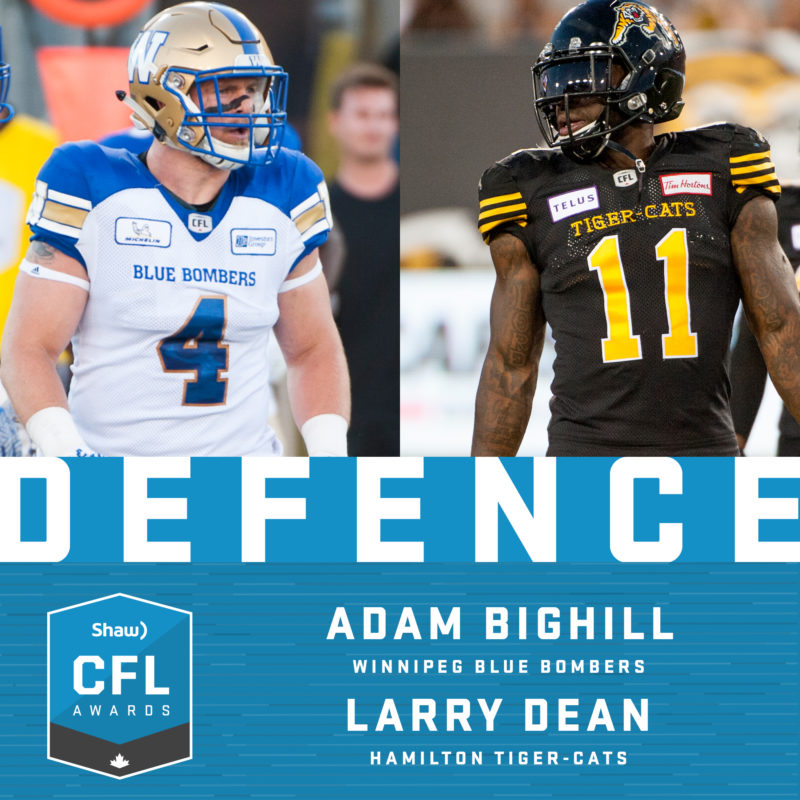 In his first season with the Winnipeg Blue Bombers, Adam Bighill continued his streak of seasons with 100+ tackles by recording a whopping 105 while adding four sacks, two interceptions and four forced fumbles (making him the league leader) to help the Blue Bombers clinch a playoff berth. Bighill becomes the first Blue Bomber to be nominated since Jovon Johnson did so in 2011. Bighill helped lead a defence that finished tied for first with a turnover ratio of +13, second in points allowed (23.3 ppg) and tied for the second-fewest yards allowed per play (6.0). He registered 127 defensive plays on the season.

Tiger-Cats linebacker Larry Dean cracked the 100-tackle plateau for the first time in his career and finished tied for third with fellow nominee Bighill with 105. Dean was the key piece in the best defence in the East Division. The team allowed the fewest number of yards (334.3 yards per game) and the least amount of rushing yards (110.6 yards per game) in the East. Dean finished the season with 113 defensive plays. 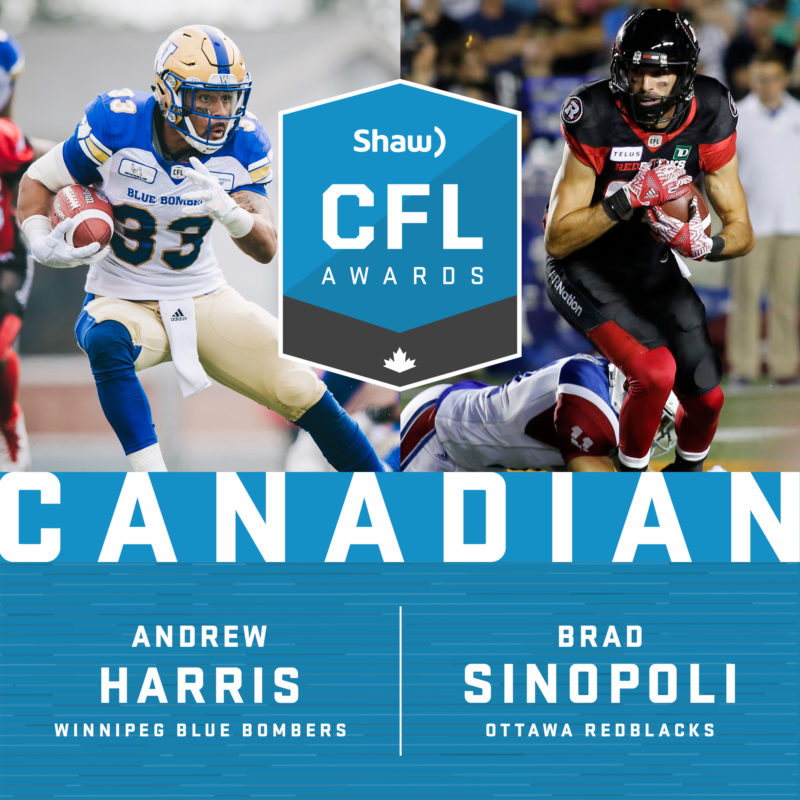 The reigning Most Outstanding Canadian, Andrew Harris is the West Division nominee for the second year in a row. Harris led the league in rushing and set a career-high with 1,390 rushing yards. The Winnipeg, Manitoba native also recorded 58 receptions for 451 yards and scored 11 touchdowns on the season. The East Division nominee is REDBLACKS receiver Brad Sinopoli. The Peterborough, Ontario native set a CFL record when he notched 116 receptions, a new Canadian record surpassing Ben Cahoon (112). Sinopoli finished third in receiving yards in the CFL with 1,376 and had 36 second down conversion catches. This marks back-to-back seasons that both Harris and Sinopoli are nominated for the award. 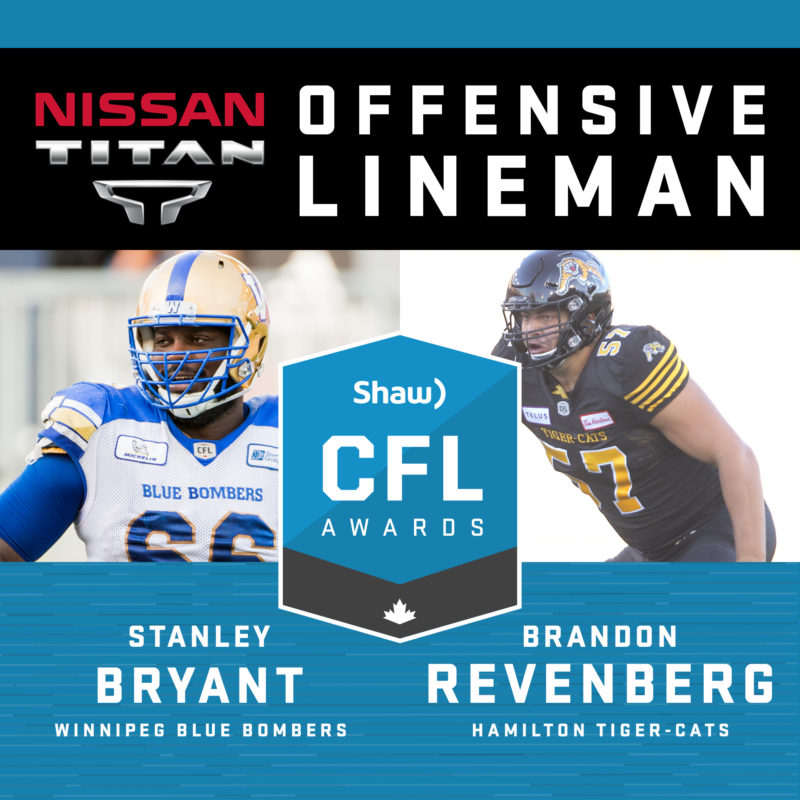 The nominees for the Nissan TITAN Most Outstanding Lineman award are Winnipeg`s Stanley Bryant and Hamilton’s Brandon Revenberg. This is Bryant’s second consecutive season receiving the nomination. As a team, Winnipeg saw their starting running back win the rushing title, formed an offence that scored the most offensive touchdowns (53) and tied for third for fewest sacks allowed (36). As for Hamilton’s offensive guard, Revenberg helped anchor a line that saw their Jeremiah Masoli surpass 5,000 passing yards; Revenberg’s blocking contributed to the second-best passing attack in the CFL (310.7 passing yards per game), saw Hamilton lead the league in time of possession (31:24) and tied them with Winnipeg for third fewest sacks allowed (36) this season. 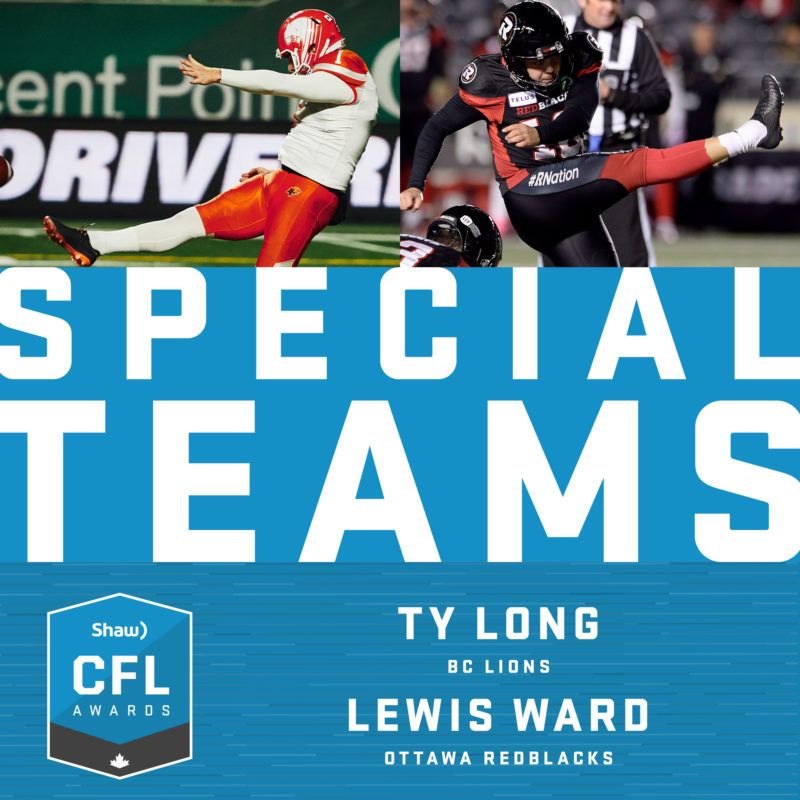 BC’s punter-kicker Ty Long and Ottawa’s kicker Lewis Ward are nominated for Most Outstanding Special Teams Player. Long handled both kicking and punting duties for the Lions this season and led the league in both punting (48.8 yards per punt) and net punting (38.5 yards per punt) while averaging 65.3 yards on kickoffs. He also made 43 of 49 field goal attempts this season (87.8%) and went a perfect six-for-six from 50+ yards. Ottawa REDBLACKS rookie kicker Lewis Ward led the league with an incredible 98.1% field goal kicking percentage, setting a single-season CFL record (former record was 94.7% by Rene Paredes). Ward also set the all-time record for most consecutive made field goals with 47. Ward finished with 169 points scored for the REDBLACKS. 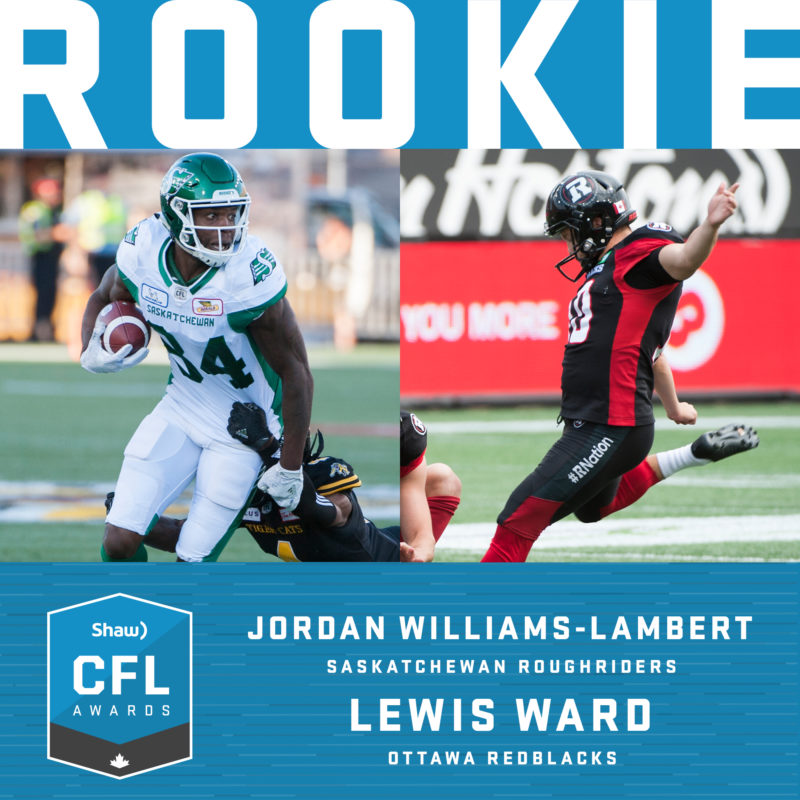 Ward again is also nominated for Most Outstanding Rookie alongside Saskatchewan receiver Jordan Williams-Lambert. Williams-Lambert played in 17 games where he compiled 62 catches for 764 yards and four touchdowns. Of his 62 receptions, 21 of them were for clutch second down conversions. He finished first among Riders in receptions, tied for first in touchdown receptions and second in receiving yards. The last Roughriders player to be up for the award was Weston Dressler in 2008. Ward is the second REDBLACKS player to be nominated since Ottawa returned to the CFL in 2014. The other occurrence was in 2016 when Jason Lauzon-Séguin was nominated. 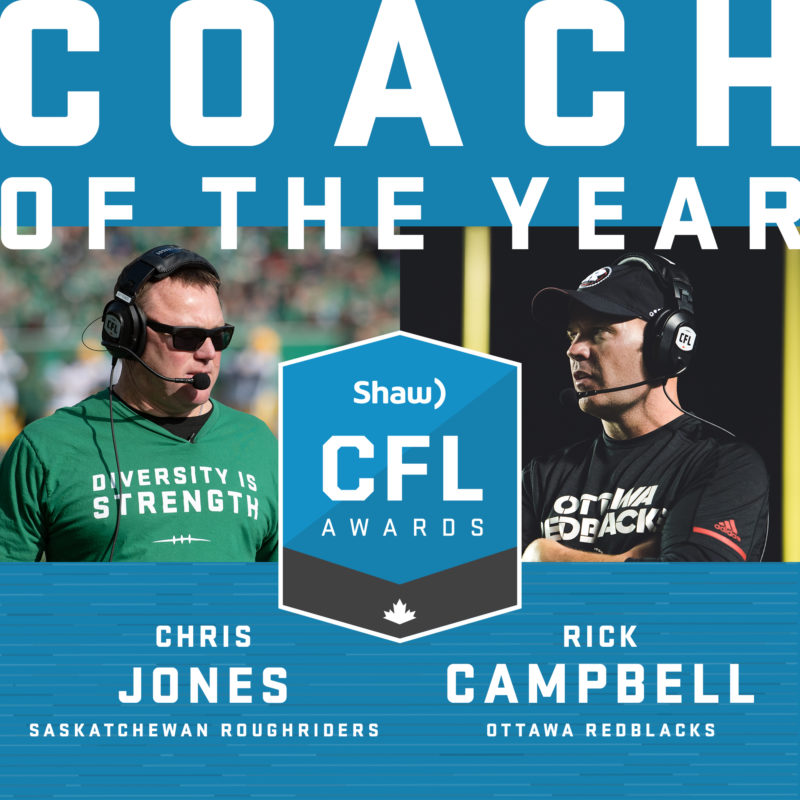 Saskatchewan’s Chris Jones and Ottawa’s Rick Campbell will vie for the Coach of the Year Award. Chris Jones saw his team improve by two wins from the year before and had his team in the hunt for the West Division crown until the final week of the season. Campbell saw his team win the East Division Title and put themselves a victory away from competing in the Grey Cup for the third time in four years. Both these coaches squared off for Coach of the Year back in 2015 when Campbell won the award.

The Commissioner’s Award, the Jake Gaudaur Verterans’ Affairs Award, the Tom Pate Memorial Award and the Hugh Campbell Distinguished Leadership Award will also be handed out at the Shaw CFL Awards.